This regiment included all field and fortress artillery units in Spain and in the colonies to the exception of the troops manning the coastal batteries. There was no standardisation of models and calibres for the artillery pieces. A reform had been attempted in 1756 by the count of Aranda but it met with so much resistance that Aranra resigned in 1758. 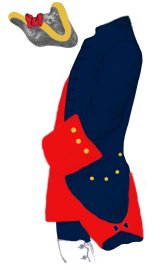 A bandera coronela (King's Colour) and eight sencillas (battalion colours) were granted, for the three initial battalions. The 1st battalion had one coronela and two sencillas; the other two battalions, three sencillas each.

The initial coronela of the regiment was white as those of the infantry but with some additional elements characterizing artillery. A new coronela was issued in 1749 and remained in use until 1806/1814.

Coronela: White field with the coat of arms of Ferdinand VI in its center, flanked by golden lion supporters; the whole was surrounded by trophies of arms.

Sencilla: Blue field with a red Burgundian cross; corner devices consisting of a medallion carrying the arms of the regiment (the small royal crest surrounded by flags and cannons) surmounted by a golden crown. Some sources mention that a white scroll with the motto "REAL ARTILLERIA" was added at a subsequent date.

Juan José Torres and the Asociación Cultural de Modelismo Histórico Alabarda as well as Volker Scholz for the information and counseling provided for this article.