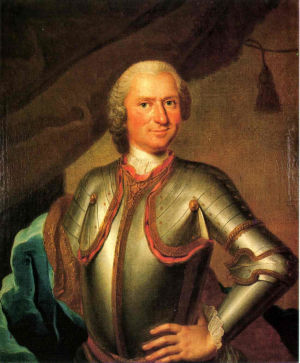 Friedrich Daniel von St. André (aka St. Andreé or Saint Andrée) was a general with rather an unusual career, serving in the Imperial "Austrian" army, the Reichsarmee as a Franconian general and, for a short time, in the Russian army as a volunteer. His family originally came from the French nobility. Expelled as Huguenots in the 16th century, they eventually belonged to the Franconian and Swabian imperial knighthood. The Kochendorf line of the family, which resulted from a division of inheritance in 1699, was incorporated into the Franconian canton of Odenwald.

Friedrich Daniel's father Johann Daniel von St. André (1662-1741), a member of the Königsbach branch of the family, was court marshal of Baden, his wife Charlotta Louisa von Weiler was the daughter of a Sponheim councillor.

Friedrich Daniel married Friderica Charlotta von Leutrum-Ertingen (1721-1782); she came from a noble family based in Swabia and Anterior Austria.

Nothing is known about St. André's early military career; in any case, he entered the imperial service in 1716. In the First Silesian War (1740–42), he was an colonel with k.k. Infantry Regiment Botta and took part in the Battle of Mollwitz, where he was wounded. Later he was commander of the Fortress of Neisse, which he had to surrender to the Prussians on October 31, 1741.

78-years-old Hölzl died on April 16, 1749, whereupon Gudenus applied for the rank of FZM and Zehe FML according to their respective seniority. Both could look back on many years of service. Gudenus had been in Franconian service since 1694, 75-year-old Zehe had received a Franconian company in 1720, but had probably been in Venetian service before that. The latter, after all, had experience as commanding general of the Franconians in the War of the Polish Succession (1733–35).

Although both were promoted as desired – Zehe, however, only in 1750 – the emperor was apparently not satisfied with the state of the Franconian military. The imperial minister at the district Widmann suggested an imperial general, namely St. André as FML (!). The Franconian generals would not have the possibility to implement the quite desired reforms in the military, also because of the temporary separation of the two Brandenburg contingents (in the form of a separate regiment) from the military. A number of Hölzl's proposals are preserved in the district's files. A general coming from outside, who, as was emphasized, did not require a regiment, could remove all obstacles here. Whether the imperial side also wanted to provide for St. André must remain an open question. But he was certainly strategically cleverly chosen in his status as a nobleman from the empire. Of course, the Franconians hardly had the possibility to reject a proposal from the imperial side. After just three weeks, all of the envoys had presented their respective masters' approval. The special "experience in war" and the fact that the Franconian generals would "not be harmed" because of him not demanding a regiment (he had and kept his Slavonisch-Gradiskaner Grenzer regiment) facilitated at least formally the consent. The Margrave of Bayreuth in particular, as Kreisobrist, had probably been annoyed that the states had not accepted his proposals for a uniform exercise for the infantry (a copy is preserved in the Nuremberg City Library) and also agreed.

Thus, St. André finally became a Feldmarshall Lieutenant with the salary of a major-general on November 14, 1749. However, he remained strangely quiet about any improvements in the Franconian military system in the aftermath. The infantry uniforms had already been modernized in 1748 and unfortunately the dark blue basic colour had been chosen, which was to become unpleasantly conspicuous again and again later. New regimental pieces had already been cast in 1741 by the active and competent Colonel Leonhard Stephan (von) Creuznacher. It was not until 1756 that St. André, together with other Franconian generals, drew up a report, especially on the artillery. Minor adjustments to the organization and uniforms of the regiments were made in the same year.

Be that as it may, St. André now apparently had a dual function as an imperial and Franconian general. Thus, even in the Seven Years' War, as an experienced general, he was not active for Franconia, although the circle promoted him Feldzeugmeister after Gudenus's death on October 26, 1757 – the corresponding imperial rank followed on December 4.

In 1756, St. André was ordered to join the k.k. army in Bohemia and in 1757 he was sent to the Russian army. In the same year, he in vain applied for the vacant Franconian regiment Gudenus (+ 13 May 1757); but it was conferred to the Franconian Major-General Johann Carl von Cronegk.

At the Battle of Gross-Jägersdorf on August 30, 1757, St. André is described as one of the volunteers who, according to Apraxin's report, distinguished himself by "zeal and special bravery." Thus, he was not on active duty with either the Imperial or Franconian troops at this time. His further activity with the Russian army remains obscure.

Only in May 1759 St. André appears again and mentions that his equipage has now arrived from Russia. He applied to the Franconian Imperial Circle to receive the infantry regiment that had been made vacant by Ferntheil's resignation. This was refused, since he still had the Slavonisch-Gradiskaner Grenzer regiment and, above all, had renounced any Franconian regiment when he was employed by the circle (although, according to his statements, he never issued a waiver). Ferntheil's regiment went to Heinrich August Count Hohenlohe-Ingelfingen. After all, on August 2, the circle approved the field pay of a FML retroactive to May 1.

On May 17, during a Prussian incursion in Franconia, St. André went to Würzburg with a corps of eight battalions and dragoons, and a little later reports an attack by General Veczey on troops of Wunsch who were trying to raid magazine near Kitzingen. In July we find him in Coburg.

The only major engagement in which St. André was in command was the attempt to recapture Torgau. The Prussians had retaken the fortress only on September 1, having been forced to surrender it two weeks earlier. An initial sortie by Wunsch was repulsed. Then, however, the entire garrison moved out. In the ensuing Combat of Zinna, after a successful Prussian attack was made on the grenadier corps of the left wing, which formed the vanguard at the Ratsweinberg, the reserve corps advanced. Heavy artillery fire was launched on the right wing, and the disorganized cavalry of the left wing retreated before another Prussian attack. This left the infantry, which according to St. André "but kept all composure," unprotected and finally had to retreat at 4:00 p.m.

St. André then marched back to Eulenburg. His report gives the losses as 600 men and four guns, but 87 Prussian cavalry prisoners were taken. The Franconian Ansbach Dragoons had temporarily (!) captured 100 men of the [Plettenberg Dragoons]]. Wunsch was subsequently able to move against Leipzig.

It was not until November 1759 that the Franconian Circle was astonished to discover that St. André had never been formally sworn in and promptly made up for it.

In December 1759, St. André made a surprise appearance in Hirschbach with a personal suite of 34 persons and 50 horses. He had been released by the emperor from service in the combined Reichs- and imperial execution army. He immediately demanded payment in accordance with the regulations - which, however, had already been granted to him on August 2 - and the 24 bread- and 36 horse rations to which he was entitled.

In March 1760, St. André hastened to counter the rumour that he, like other generals of the Reichsarmee, had sold his equipage and did not want to serve as a Franconian FZM. The circle probably also wanted to have its own generals in the field and yet had only Varell (he omits Hohenlohe-Ingelfingen and Wolfskeel), he remarked.

The Franconians, however, apparently knew little what to do with him. No wonder, St. André did not have a Franconian regiment and the Franconian troops were scattered, sometimes even in battalions. A coherent Reichsarmee did not exist any more and the empire had handed over any decision about the imperial generalship to the emperor at the beginning of the war without any need, which led to the fact that not a single Reichsarmee-general really came from the generality of the empire. Thus it probably came about that – by Pfalz-Zweibrücken's order ! - he in July 1760 was to be put in charge of the hospitals, a task he seems to have refused on account of his rank.

Until the end of the war, St. André, as far as can be seen, no longer appears in the Franconian records. Only leaves of absences to undergo cures are mentioned in December 1760 and May 1762.

St. André's whereabouts after the war remain to be clarified. He died of a stroke in the evening of August 29, 1775 in Ansbach, as his "highly distressed widow" informed the circle on September 1. His marriage had remained childless, and his brother continued the family. St. André was buried on September 3 in the (no more existing) family tomb in Ansbach. The Ansbach parish-book only mentions the funeral procession and no more details. His wife followed him on May 29 1782.

Documents from the Bavarian state archives at Nuremberg and Bamberg