In 1684, the regiment took part in the Battle of Eperies (present-day Prešov/SK); in 1685, in the siege of Kaschau, in 1686, in the expedition in Upper-Hungary and in the engagement of Szegedin.

From 1699 to 1701, the regiment assumed garrison duty in Transylvania.

After the war, from 1714 to 1716, the regiment assumed garrison duty in Moravia.

In 1716 and 1717, the regiment campaigned once more in Hungary against the Turks, taking part in the battles of Peterwardein, Temesvár and Belgrad.

From 1717 to 1720, the regiment joined Austrian troops stationed in Sicily.

During the War of the Polish Succession, in 1734 and 1735, the regiment was attached to the army of Prince Eugène de Savoie, operating on the Rhine.

In 1737, the regiment returned to Hungary and Transylvania where it remained until 1741.

During the War of the Austrian Succession, in 1742, the regiment took part in the siege of Prague; and in 1743, in the campaign in Bavaria. It 1744, it retired to Bohemia. In 1745, it campaigned once more in Bavaria as part of Traun's Army. In 1746, the entire regiment distinguished itself in the Battle of Piacenza in Italy.

In 1769, the regiment was numbered 10th. In 1798, it was renumbered as Cuirassier Regiment No. 5. Its last proprietor was, since 1781, FML Caspar Wolfgang Baron Zezschwitz. The regiment was disbanded 1802 and its squadrons transferred to various others cuirassier and dragoon regiments.

In June 1756, at the beginning of the Seven Years' War, the regiment was stationed in Hungary and counted 780 men and 798 horses. On October 1, it took part in the Battle of Lobositz where it was in the second line of the cavalry of the right wing under the command of Major-General Lobkowitz. However, these cavalry units were redeployed in the centre of the Austrian positions. During the battle, Prince Lobkowitz distinguished himself.

On May 6 1757, the regiment took part in the Battle of Prague where it was deployed in Count Lanthiery's Brigade, in the second line of the right wing under Baron Bretlach. On December 5 at the Battle of Leuthen, the regiment was deployed in Woellwurth's Brigade in the first line of the cavalry right wing under General Lucchesi.

By August 2 1758, the regiment was serving in the second line of the main Austrian army under the command of Daun near Jaromirs. Daun was following up the Prussian army retiring through Bohemia after the failure of the invasion of Moravia. On October 14, the regiment took part in the Battle of Hochkirch where it was deployed in Buccow's cavalry column at the extreme right, to the east of Kotitz.

By mid August 1759, the regiment was part of Daun's Corps posted in Silesia. On September 2, it took part in the Combat of Sorau. On November 20, the regiment took part in the Battle of Maxen where four of its squadrons were deployed in the second cavalry column of Sincère's Corps under the command of Lieutenant-General Count Stampa while another squadron was attached to Major-General Baron Seckendorf's detachment occupying the Heights of Malter near Dippoldiswalde.

On November 3 1760, the entire regiment distinguished itself in the Battle of Torgau. Captain Ignaz Baron Kautsch was sent with his horse carabinier company and one company from the Portugal Cuirassiers to secure the flank of the grenadiers who were being attacked by a Prussian cuirassier regiment. Kautsch and his carabiniers drove the Prussians back and captured 3 standards. Later on, Kautsch attacked a Prussian infantry battalion, threw it into disorder and freed many soldiers from Colloredo Infantry (?Jung or Alt Colloredo?) captured by the Prussians (for his valour, Captain Kautsch would receive the Knight Cross of the Maria-Theresia-Order on December 22 1761).

In 1761, the regiment was in Saxony but saw no action.

In 1762, the regiment campaigned once more in Saxony. Only two squadrons, led by Captain Christian Count Rindsmaul, participated in the surprise attack on Meissen.

At the end of the war, in 1763, the regiment marched to its peace-quarters in Transylvania. 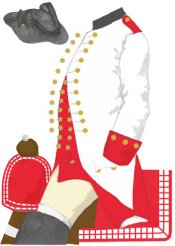 Uniform in 1762 – Source: Frédéric Aubert from a plate of Richard Couture and Ibrahim90

The Bautzener Bilderhandschrift of 1762 shows a gold lace on the tricorne and a red neckstock.

Raspe shows 13 brass buttons (instead of 11) on each side of the coat, and red breeches.

Harald Skala for additionnal information on the origins, history and service of the regiment