The regiment was raised on December 18, 1740 in Lower Silesia, at the beginning of the War of the Austrian Succession (1740-48), by Christoph Ernst von Nassau. Initially, its troopers came mostly from units formerly in the Saxon service who had recently surrendered. By the summer of 1741, the regiment counted five squadrons; in the autumn, it occupied Nesse. In 1744, it took part in several minor actions; in 1745, in the Battle of Hohenfriedberg.

The regiment garrisoned Sagan, Beuthen, Sprottau and Grünberg. It levied its recruits in the districts of Grünberg and Sagan.

At the beginning of the Seven Years' War, the regiment counted five squadrons.

The regiment was disbanded on October 28, 1806 after the capitulation of Hohenlohe at Prenzlau.

Around mid-August 1756, the regiment was mobilized. It joined the Army of Silesia under Field-Marshal Schwerin (Lloyd mentions Rochow but this is impossible since this regiment was operating in Saxony in Frederick's army). During the campaign of 1756, Schwerin's Army remained on the border between Silesia and Bohemia.

On the morning of February 19, 1758, the regiment marched towards Troppau, believing that the town was still in the hands of the Prussians. Austrian hussars and Polish uhlans attacked the regiment on the march from three sides. In this combat, Stechow Dragoons lost 10 officers, 8 NCOs, 279 dragoons and 301 horses taken prisoners or missing. The Leib-Carabiniers who rode to the relief of Stechow Dragoons were only able to rescue the standards and a few men. In April. the regiment was part of the Prussian army who proceeded to the invasion of Moravia. On June 29, the regiment took part in an engagement near Tobitschau. On October 14, the regiment fought in the Battle of Hochkirch where it formed part of Retzow's Corps near Weissenberg. After the defeat, it covered the retreat of the Prussian army.

On August 12, 1759, the regiment fought in the bloody Battle of Kunersdorf where it was deployed in the reserve of the left wing as part of Ascherleben’s Brigade. It was one of the last regiments to leave the field. On September 21, the regiment took part in the Combat of Korbitz where it was deployed in the second line of the left wing under Major-General Wunsch. On October 29, it fought at Pretzsch. On November 20, the regiment took part in the Battle of Maxen where it was attached to Platen's Brigade. Around 3:00 p.m., Daun's Corps deployed with its right on the heights in front of Muhlbach and its left towards Hausdorf. Finck sent the regiment along with Rebentisch Infantry to contain the attack. Completely surrounded, the entire Prussian force finally surrendered as prisoners of war. 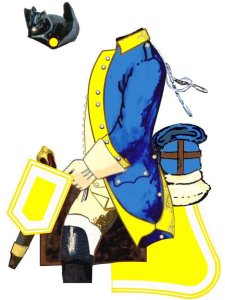 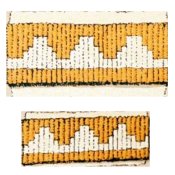 Drummers of the regiments wore the same uniform as the troopers but decorated around the lapels, the pocket flaps and the cuffs, on the shoulders and on the seams with a lemon yellow lace bordered in white and decorated with white central dented braid.

Note: several sources mention that the “FR” ciphers was also shown on the chest of the eagle; however the preserved standard in the Ghent City Museum has no such decoration