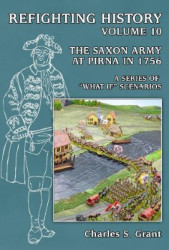 In the recently published tenth volume of his series "Refighting History," Charles S. Grant proposes ten "What if" scenarios articulated around the resistance of the Saxon Army surrounded at Pirna in 1756, during the invasion of Saxony by Frederick II of Prussia. Although built around events of the Seven Years' War, these scenarios can easily be adapted for other conflicts of the horse and musket period, from Marlborough to Napoleon and arguably up to the American Civil War.

Besides its ten scenarios, this book also presents an introduction to the campaign of 1756 in Saxony and an overview of the Saxon Army during this campaign and during the campaigns in the Western Theatre from 1758 to 1762.

As usual with Charles's books, this 195 pages volume is richly illustrated with maps, uniform plates, and numerous photos taken by Charles while play testing the various scenarios. This book is available from Caliver Books.