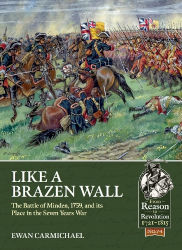 As a contributor to Kronoskaf – Project Seven Years’ War, Mr. Ewan Carmichael has in the past published an article on the British strategy during the war. His new book, “Like a Brazen Wall,” analyzes the famous Battle of Minden, applauding the exploits of each army, examining the enduring challenges of multi-nationality, and reviewing the role of the British horse and its controversial commander, Sackville.

This book also explains the strategic necessity of British involvement in an Anglo-German allied army in Europe, and describes the tactical detail of Minden and the parallel Battle of Gohfeld. It uses translations of French primary and secondary source material to review the intentions of the French commander.

The book also includes timelines, which explain what was happening, and when, in different theatres of operation; orders of battle; uniform details; and an illustrated battlefield tour. It is available from Helion & Company.