The regiment was raised on March 13, 1676 from the Compagnies franches d'Audigeau.

By August 1, 1757, the regiment was garrisoning Abbeville and Montreuil-sur-Mer in Picardie.

On March 28, 1759, the regiment was at Louvain coming from Flanders. It then joined the Army of Germany. At the end of May, when the French Army of the Rhine launched its offensive in Western Germany, the regiment remained on the Rhine as part of the corps of the Marquis d'Armentières. On August 1, when d'Armentières appeared in front of Lippstadt with his corps, he deployed the Légion Royale and Thianges Dragons northwards at Warendorf and Telgte to guard his communications with Münster. The regiment then took part in the siege of Münster. By October 25, still attached to d'Armentières' Corps, the regiment was posted at Bork.

By May 23, 1760, the regiment was part of a detachment under the command of MM. d'Amezaga, Duc de Fronsac. On June 17, the regiment was part of a small division, under M. de Leyde, who reached Düsseldorf, on its way to join Saint-Germain’s Corps. On July 4, as part of d'Auvet's Division, it reconnoitred the area of Arnsberg. On July 31, the regiment took part in the Battle of Warburg where it was deployed in the first line of the centre. On August 22, the Hereditary Prince crossed the Diemel with 12,000 men and advanced on Broglie's left flank, his vanguard reaching Zierenberg. His light troops engaged a French detachment (Royal Dragons, Thianges Dragons and part of the Chasseurs de Fischer) under M. de Travers, which had been left at Oberelsungen to observe the movements of the Allies. The Allied light troops were soon supported by the Hereditary Prince at the head of the 2nd North British Dragoons (Scot Greys) and the 6th Inniskilling Dragoons and the British grenadiers. The French were finally driven back with considerable losses and took refuge in Zierenberg. On October 1, Broglie sent M. de Chabo towards Hachenburg with Royal Dragons and Thianges Dragons. On October 11, Chabo took position between Neuss and Meerbusch. On October 16, the regiment was at the Battle of Clostercamp where it formed part of the reserve under the Maréchal-de-camp Duc de Fronsac.

In February 1761, the regiment formed part of the Army of the Lower Rhine and was posted near Kleve under the command of Lieutenant-General d'Auvet. It was then allocated to de Muy’s Corps during the winter campaign in Hesse. On July 16, during the Battle of Vellinghausen, the regiment was allocated to the Corps of the Prince de Condé. On August 9, the regiment formed part of the reinforcement sent to the Army of the Upper-Rhine by the Prince de Soubise for its enterprise against Hameln. These reinforcements under Lieutenant-General de Lévis left from Rahm, passed the Ruhr at the bridge of Herdecke and spend the night near Hagen. On August 30 in the morning, a strong Allied column came out of Münster and marched on Bösensell, occupied by the Volontaires de Soubise and the Volontaires de l'armée on the French left wing; and on Groß Schonebeck on the Stever (near Nottuln) defended by the present regiment. At 9:00 a.m., informed of the attack on his advanced posts, Soubise went to the support of his left while ordering M. de Montbarey to support Chapt Dragons with the grenadiers and chasseurs battalions of Briqueville Infanterie, La Couronne Infanterie, and Bouillon Infanterie along with 2 artillery divisions. After a short engagement, the Allied infantry stopped while the Allied cavalry retired. Soubise ordered M. de Fronsac to attack the Allies who retired from hedges to hedges to the plain of Roxel where they tried to form. The present regiment and the dragoons of the Volontaires de Soubise charged them, penetrating the column in two occasions and capturing a few prisoners. The Allies then retired to Münster. M. de Wurmser was severely wounded during this action. On September 2, M. de Vogüé moved closer to Wesel with La Marck brigade, Flamarens Dragons, Chapt Dragons, the Volontaires du Dauphiné and the Maison du Roi, thus threatening Dorsten. By November, the regiment was posted in the district of Kleve.

In March 1762, the regiment was allocated to the corps of the Prince de Condé. On April 19, M. d'Apchon marched on Dortmund with 4,400 men (including 500 men of the present regiment), while 100 men of the regiment took position left of Wesel. By May 29, the regiment was posted at Kalkar. On July 4 in the morning, M. de Melfort and his vanguard bumped into Scheither's Corps at Leer (unidentified location) on the Lower Rhine and took 100 men and 3 officers prisoners, including M. de Scheither. The present regiment and the Volontaires du Dauphiné distinguished themselves in this action. On August 25, the regiment took part in the Engagement of Grüningen where it was deployed en potence on the left flank. On August 30, it fought in the Combat of Nauheim, where it formed part of the vanguard under Lieutenant-General Lévis. On November 20, Louis XV issued his instructions regarding the French armies serving in Germany, specifying which units should return to France right away and which should stay in Germany until the final evacuation. The present regiment was among those which remained in Germany and was posted on the Meuse. 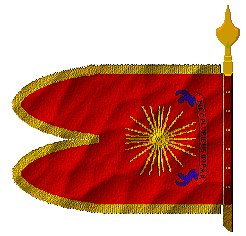