The regiment was created on November 15, 1674 from the militia of Languedoc by the Maréchal de Schomberg. The unit would remain a gentleman’s regiment until December 1762, being known by the names of its successive colonels.

In 1675, during the Franco-Dutch War (1672-78), the regiment took part in the capture of Figueres, in the attack of Girona and in the submission of Ampurias, Bellegarde and Castle La Chapelle. In 1676, the regiment was transferred to Sicily. In 1678, it returned to Catalonia.

In 1684, the regiment took part in the Battle of the Ter River, in the assault of Girona and in the investment of Quiers.

In 1727, the regiment took part in the training camp of the Saône.

In 1733, at the beginning of the War of the Polish Succession (1733-35), the regiment was sent to Italy where it assisted in the capture of Gera d’Adda, Pizzighetone and the Castle of Milan. In 1734, it took part in the sieges of Novara and Tortona, and fought in the battles of Colorno, Parma and Guastalla, and then in the covering of the siege of Mirandola. In 1735, it contributed to the capture of the Castle of Gonzague, of Reggiolo and of Revere.

In October 1736, the regiment returned to France and was stationed at Montlouis.

In 1742, during the War of the Austrian Succession (1740-48), the regiment left Languedoc and marched to Flanders where it was initially stationed in Lille. In 1743, it was part of the troops assembled at Dunkerque for an expedition in Scotland which was canceled. It then returned to Lille. In 1744, it was attached to the army of the Maréchal de Saxe and covered the sieges of Menin, Ypres and Furnes. In 1745, it assisted to the Battle of Fontenoy but was not involved in any fighting, guarding the village of Ramecroix. It then took part in the submission of Tournai, Termonde, Oudenarde and Ath. In 1746, it took part in the siege of Bruxelles and in the Battle of Rocoux. On November 6, 1746, the regiment was re-established at two battalions. In December, it received orders to march to Provence. In 1747, it took part in the recapture of the islands of Sainte-Marguerite and Saint-Honorat. It then guarded the bridge of Saint-Laurent-du-Var before being stationed in Monaco.

On December 27, 1748, the regiment was reduced to a single battalion but, on March 10, 1749, it incorporated companies of the disbanded Beaujolais Infanterie to form its second battalion.

In 1753, the regiment was placed in garrison in Toulon.

During the Seven Years' War, the regiment ranked 60th and was under the command of:

In December 1762, when the French Army was reorganised, the regiment ceased to be a gentleman regiment and took the name of the Province of Beaujolais.

In 1756, the regiment was garrisoning Toulon. In May, it was sent to reinforce the French army who had laid siege to Fort St. Philip during the French expedition against Minorca. On June 27, it distinguished itself during the final assault where Captain de Crémoux, Captain de Chavigny, Captain Deshayatz and Lieutenant Parron were wounded.

In 1757, the regiment returned to France. In February of the same year, it changed owner, becoming "Brancas Infanterie". It was then ordered to join the Army of the Lower Rhine preparing for the invasion of Hanover. It reached Hessen in August where it joined the army. After the Convention of Kloster-Zeven, it followed the main body, led by the Maréchal de Richelieu, who encamped at Halberstadt, in Prussian territory, from September 28 to November 5. The regiment was placed in the centre of the first line. At the end of the year, it took its winter-quarters in the third line of the French army in Hameln.

In February 1758, when Ferdinand of Brunswick launched his winter offensive in western Germany, the regiment retired on the Rhine with the rest of the French army. From March 30 to April 4, it was in the first line of Clermont's Army in the camp of Wesel on the Lower Rhine. In April, when Clermont redeployed his army along the Rhine, the regiment was stationed at the Fort of Zons on the Rhine near Neuss. After the successful crossing of the Rhine by Ferdinand's Army on May 31, the regiment retired towards Rheinberg where it joined Clermont's Army on June 2. It remained in this camp until June 12 and was placed in the centre of the first line. On June 23, the regiment took part in the Battle of Krefeld where it was placed on the left wing of the second line under Saint-Germain whose division bore the brunt of the Allied attack when it tried to stop an outflanking manoeuvre. It defended the woods along the Niers River during three hours, repulsing three attacks before retiring in front of superior forces. The regiment suffered heavily, losing Major Horric de Loygerie, Aide-Major du Verne, Captains Soulignac, La Blessière, Fabre, Chevalier Fabre, Danoux, Mérinville and Lieutenant Margouet. The regiment then retired under the walls of Cologne. In July, the regiment changed owner again and became known as "Durfort Infanterie". On August 5, the regiment formed part of Chevert's Corps and took part in the Combat of Mehr where it distinguished itself, its brigade being the last one to retire from the battlefield. In Mid August, after Ferdinand's retreat to the east bank of the Rhine, the regiment, as part of the Army of the Lower Rhine, now under Contades, recrossed the Rhine to follow up the Allies. On August 20, it was encamped near Wesel where it formed part of the Picardie Brigade on the infantry right wing of the first line.

At the end of May 1759, when the French Army of the Rhine launched its offensive in western Germany, the regiment remained on the Rhine as part of the corps of the Marquis d'Armentières. In October, it bravely defended Münster. On October 15, it sallied with its artillery and bombarded the enemy in its camp at Roxen, forcing them to evacuate the camp. On October 16, it sallied once more, burnt the camp of Dybourg, capturing weapons and horses, and came back to Münster with 200 prisoners, one gun and the colour of Marsschalck Infantry. In December, the regiment was blockaded in Giessen with other units. On December 22, Captain de Cerval, its commander, along with the Volontaires du Dauphiné, (altogether a force of 500 men) sallied and attacked the village of Klein-Linnes. Emerging suddenly into the village, they captured a redoubt, surprised and routed the Hanoverian Behr Infantry and a squadron of dragoons, killing 50 men, wounding 80 and bringing back 22 prisoners.

By the end of January 1760, the regiment had taken its winter-quarters in the third line of the French army along the Rhine and the Main from its mouth. By mid March, the regiment was billeted in Hanau, still in the third line. By May 23, the regiment was part of the first line of the infantry centre of Broglie's Army. On July 10, the regiment was part of the left wing of Broglie's Grande Armée who came to the support of the vanguard around noon at the Combat of Corbach. It also went to the relief of the besieged Fortress of Wesel, entering into the place on October 15. On October 28, the regiment attacked the enemy in Schoerneck, capturing the place. After the relief of Wesel, it retired at Göttingen. On November 28, it took part in an operation against Hebdemunden. By December 30, the regiment had taken its winter-quarters in Almerode on the Gelster.

In February 1761, the regiment was sold to the Comte de Lastic. On March 27, the regiment, now known as Lastic, sallied from Göttingen and, along with Belzunce Infanterie, attacked General Colignon near Northeim, killing 60 men, capturing two guns, 8 officers and 200 soldiers, and forcing Colignon to abandon the position. Meanwhile, a few companies took part in the siege of Cassel. It completed the campaign by a raid in Hanover.

On September 21, 1762, the regiment took part in the Combat of Amöneburg. 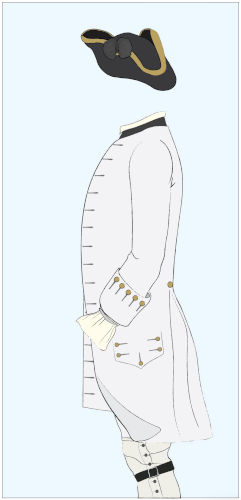 The ordonnance colours of this regiment are sometimes represented with 2 white cantons and 2 green and red gironed cantons. We have retained a simpler pattern illustrated in the manuscript "Troupes du Roi, Infanterie française et étrangère, année 1757, tome I" kept at the Musée de l'armée in Paris.