There are some doubts about the year of creation of this regiment. Gräffer as well as A. v. Thürheim in his book “Die Reiterregimenter der k. k. österreichischen Armee“ (Vienna, 1862) mention that Prince Julius Heinrich Sachsen-Lauenburg created this cuirassier regiment in 1618. Josef Victorin explained the real history the foundation of the regiment in his book “Geschichte des K. K. Dragoner Regimentes Herzog Wilhelmvon Braunschweig Nr 7” (Vienna, 1879) as follows:

On 9 November 1655, Johann Baron Garnier received a decree (Gehorsams Patent) authorising him to raise a new horse regiment (“…ein neues Regiment zu Pferde werben…”). That means, it was an entirely new regiment, without any connection with those of the Prince Sachsen-Lauenburg (but it is possible that some men from these regiments were incorporated in it). According to a letter of Emperor Leopold I to Count Montecuccoli dated 12 May 1659, this regiment was subdivided into two distinct units: one (6 coys) under Colonel Scholz, the other (4 coys) under Colonel Count Caraffa.

In 1663, the Garnier brothers offered to the Emperor to raise a corps of 5,000 men and one horse regiment. Leopold accepted and GFWM Johann Baron Garnier immediately started to enlist cavalrymen in Silesia. On 1 and 5 May 1664, the new regiment was reviewed at Troppau (present-day Opava/CZ) and Freistadtl (present-day Fryšták/CZ).

Thus, the year 1663 is the real year of foundation of the regiment who initially counted 1,000 men and was assigned to the Corps FZM of Souches. On 19 July, it participated in the Battle of Lewencz (present-day Levice/SK). The army, badly hurt by diseases, camped around Neuhäusel. By that time, the regiment had only 150 men. At the beginning of August 1664, Johann Baron Garnier died. On 26 August, Hans Nikolaus Count Nostitz auf Kunewalde was appointed as new proprietor and commander. The regiment did not take part in any other action until the signature of peace at Vasvár.

From 1711 to 1716, the regiment garrisoned various places in the Comitat of Sáros (present-day Šariš/SK) and Csongrad/HU.

During the Turkish War of 1716, the regiment was at the battle of Peterwardein. In 1717, it was at the siege and battle of Belgrad (August 16).

During the War of the Polish Succession, the regiment, now counting some 1,000 cavalrymen, initially served in Italy under field marshal count Mercy. In 1734, it fought at the battles of Colorno on June 1, Parma on June 29 and Guastalla on September 19.

In 1737, the regiment was transferred eastwards to fight against the Turks where it took part to the encounters of Belgrad (1738) and to the battle of Krotzka (1739) where it suffered heavy casualties.

In 1740, the regiment took his peacetime quartiers in Banat.

During the War of the Austrian Succession, the regiment was initially assigned to the corps of prince Lobkowitz which assembled at Neuhaus in 1741. It was then transferred to the Reserve under count Preissing. During the campaign of 1742, it was part of the army of Bohemia under the archduke of Tuscany who observed the movements of the French army under marshal Maillebois. During the campaigns of 1743 and 1744, the regiment served in Germany. In 1745, it fought at Hohenfriedberg (June 4) and Soor (September 30). In 1747 and 1748, it garrisoned Vienna.

During the Seven Years' War, the regiment inhaber was :

At the outbreak of the Seven Years' War, in 1756, the regiment was stationed in Banat and counted 799 men and 836 horses. It then joined the Austrian army concentrating in Bohemia where it was part of the Division of FML Emanuel count Kollowrat in the brigade of Prince Löwenstein. On October 1 at the Battle of Lobositz, it was deployed in the first line of cavalry of the left wing under the command of Major-General Löwenstein. Its carabiniers were converged with other elite units in the vanguard in front of the village of Lobositz. Baron Jakob Brockhausen, the Rittmeister of the carabinier company of the regiment distinguished himself during this battle. He was afterwards appointed aggregierter lieutenant-colonel in O'Donell Cuirassiers. At the end of November the regiment took its winter-quarters at Rokican (present-day Rokycany/CZ), Mauth (present-day Mýto/CZ) and Radnitz (present-day Radnice/CZ).

On May 6 1757, the regiment took part in the Battle of Prague where it was deployed with Lucchesi Cuirassiers in Baron Bretlach's Brigade, in the first line of the right wing under Count Lucchesi. The regiment was badly hurt during this battle, being reduced to only 272. It then marched to Beneschau (present-day Benešov/CZ). The wounded men of the regiment were sent to Deutschbrod (present-day Havlíčkův Brod/CZ) and Neuhaus (present-day Jindřichův Hradec/CZ). The regiment was then sent to Germany as reinforcement for the Reichsarmee. In the order of battle of September 27, its 6 sqns and 1 carabinier coy are mentioned in the second line of the right wing in Major-General Bretlach's Brigade. On November 5 at the Battle of Rossbach where it was deployed in the second line of the right wing, it behave splendidly under the wise guidance of Colonel Roth and of Lieutenant-Colonel R. Count Salburg. It was one of the few cavalry regiments who managed to form before receiving the charge of Seydlitz's cavalry. The Prussian cavalry wanted to surround the Trautmansdorf and Bretlach Cuirassiers but both regiments supported each other by mutual attacks. Combining with the French La Reine Cavalerie and Fitz-James Cavalerie, they managed to repulse the Prussian cavalry attacks four times before being defeated. In this battle, the regiment lost 48 men killed and 2 officers and 50 men wounded. Furthermore, Major Moriz Baron Esmond and 4 officers were taken prisoners. Its carabinier coy lost 5 dead and 5 wounded. After the battle, Prince Hildburghausen marched to Lichtenfels on the Main River with the Imperial army. At the end of November, regiments Trautmannsdorf and Bretlach were sent to their winter-quarters around Eger (present-day Cheb/CZ).

In 1758, the regiment remained with the so called “Elb-Armee” under Serbelloni, guarding the frontier between Saxony and Bohemia. It did not take part in any action. By then, it counted 988 men and 1,002 horses. At the end of August Serbelloni effected a junction with the Reichsarmee now under the command of Prince Friedrich von Pfalz-Zweibrücken in the camp of Struppen near Pirna in Saxony. The winter-quarters were in Franconia where the regiment was posted at Schwabach.

By mid-August 1759, during the Austro-Imperial campaign in Saxony, the regiment was attached to Zweibrücken's Corps. On June 13, the regiment marched from Bamberg to join the army in the camp of Trappstadt. Then, as part of Serbelloni's Corps, it went to Erfurt where it arrived on July 28. On August 5, Leipzig was occupied and the regiment remained in this city till mid-August. Afterwards it took part in the siege of Dresden. On September 8, the regiment took part in the Combat of Zinna where it was deployed in the second line of the centre and sustained several attacks of the Prussian cavalry and broke a number of dragoons and hussars squadrons. Count Trautmannsdorf, the proprietor of the regiment was wounded by a bullet during this engagement. On September 21, the regiment took part in the Combat of Korbitz (aka first combat of Meissen) where it was deployed in Kleefeld's division. Major Lazarus Count Henkel von Donnersmark distinguished himself during this combat. During the following months, the regiment was again stationed in camps in Franconia.

On March 29 1760, the regiment arrived at the camp of Kosteletz (present-day Kostelec/CZ) and was deployed in the second line of the right wing in the Brigade of Major-General Saint-Ignon. On June 23, the regiment fought under general count Belgiojoso as part of Loudon's Corps at the battle of Landeshut. During this battle it broke through two Prussian battalions and, supported by two squadrons of the Kolowrat-Krakowski Dragoons, captured five guns and as much flags. Lieutenant-colonel Rudolf count Salburg along with lieutenant-colonel count Josef Kinsky of the Löwenstein Dragoons broke through five Prussian grenadier battalions despite their courageous and steadfast resistance. The grenadiers retreated but the Austrian cavalry broke them and captured many. The regiment lost only 1 men killed while Major Esmond, Captain Schönfeld and 32 men were wounded. On August 15, at the Battle of Liegnitz, FM Loudon was nearly captured by the Prussians but a few cuirassiers of the regiment managed to rescue him. In this battle, the regiment lost 12 men killed while Colonel Turati and 29 men were wounded; and Captain d'Hyus, 48 men and 64 horses were taken prisoners. By August 26, the regiment counted 5 squadrons, 26 officers, 48 NCOs and 489 men and its carabinier coy, 3 officers, 5 NCOs and 71 men. On December 20, the regiment took to its winter-quarters at Pilgesdorf, Bergstättel, Peitschdorf, Bischofswalde, Olbersdorf and Troplowitz.

On April 23 1761, the regiment left its camp and was assigned to Saint-Ignon's Brigade posted near Hauptmannsdorf. On July 19, the entire army of FM Loudon marched towards the Russian army to effect a junction. Loudon could not persuade the Russian commander Buturlin to launch a concerted action against Frederick II, so he decided to proceed to the storming of Schweidnitz where the regiment was present. The regiment then took its winter-quarters around Freiburg in Silesia.

On January 15, the regiment was revieved at Pitarna in Upper Silesia and was attached to Daun's Army. On May 14, Daun moved his camp to Zobtenberg. On August 16, the regiment took part in the Battle of Reichenbach (aka Peilau, near Fischberg) in Silesia.

On January 24 and on March 29 1763, the regiment was reviewed at Engelsberg (present-day Andělská Hora/CZ) and Freudenthal (present-day Bruntál/CZ).

In 1764, the regiment was sent to Transylvania. 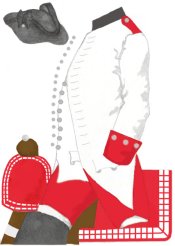 Troopers were armed with a black breastplate (worn over the coat), a pallasch (sword) and a pair of pistols. Carabiniers also carried a carbine and had a saber instead of a sword.

The Bautzener Bilderhandschrift of 1762 shows a silver lace on the tricorne and a red neckstock.

Leib Standard: White field with a gold fringe and, in its centre, the gold double eagle of the Hapsburgs.

Regimental Standard (variant): reddish pink field with with rich silver embroideries delimiting a reddish pink circle in the middle of the standard with in its centre: