In December 1734, Ladislas-Ignace Comte Esterházy was authorised to raise a regiment of hussars which was formed at Strasbourg on January 25 1735. By April 25 1736, each company of this regiment counted 40 men. On January 8 1737, each company was reduced to 25 men. The squadron now comprised 4 companies for a total of 100 men.

In 1739, the regiment, now under the command of Lieutenant-Colonel David, embarked for Corsica where Louis XV was sending it to support the Genoese.

At the beginning of the War of the Austrian Succession, in 1741, the regiment was recalled to France where it was initially stationed in the eastern part of the kingdom before advancing to the Rhine. On August 5 of the same year, the companies were brought back to 50 men each. In 1742, the regiment followed the French army which invaded Bohemia. Several officers of the unit were wounded during the siege of Prague. Esterházy distinguished himself while covering the siege. On October 31, the regiment was increased to 6 squadrons. On August 1 1743, Esterházy sold the regiment to David who became its mestre de camp. In 1744, the regiment joined the Maréchal de Saxe in Flanders. Between May 22 and July 21, it took part in the siege and capture of Mons, Tournai, Ghent and Bruges. In 1747, the regiment took part in the campaign of Flanders. On July 2, it fought in the Battle of Lauffeld. In 1748, Turpin became the chef of the regiment.

From August 26 to September 25 1755, the regiment detached a squadron to take part in an instruction camp at Richemont-sur-Moselle.

In 1756, the regiment received part of the troops of the disbanded regiments of Aspremont-Linden, Beausobre and Ferrary. It then counted 4 squadrons.

On May 5 1758, “Polleresky Hussards” were disbanded because of the plundering and robberies perpetrated against the German Allies of France; 2 of its squadrons were incorporated into “Turpin Hussards” bringing the total force of this regiment to 6 squadrons.

From January 4 1760 to April 4 1761, a small unit of volunteers was attached to the regiment. This unit was initially known as the Chasseurs-à-pied d'Origny, then Chasseurs de Grandpré.

In 1761, the regiment was renamed Chamborant.

N.B.: this regiment must not be confused with “Esterhazy Hussards”, a new regiment raised only in 1764.

In 1757, as part of the Army of the Lower Rhine, the regiment was among d'Estrées' light troops. On June 14, the regiment was near Holss. At the end of June, together with the Chasseurs de Fischer and the Volontaires Royaux, they formed an observation corps in front of the Duke of Cumberland's position near Herford and Minden. At the end of August, the regiment was operating in Saxony around Leipzig and Halle. It retreated in front of the approaching Prussian cavalry. On September 19, it was part of a force of 8,000 horse and foot sent ahead to retake Gotha, where they found open gates. However, Lieutenant-General Seydlitz had mounted a surprise counter-attack with some 1,500 men. The Franco-Imperial detachment quickly abandoned the town. At the end of the year, the regiment took its winter-quarters in the first line of the French army at Viehenburg.

On February 2 1758, during the Allied winter offensive in Western Germany, a Prussian detachment (cavalry and hussars) from Halberstadt attacked the town of Steinfeld where it surprised and captured 600 men of the regiment. On May 5, “Polleresky Hussards” were disbanded because of the plundering and robberies perpetrated against the German Allies of France; 2 of its squadrons were incorporated into “Turpin Hussards” bringing the total force of this regiment to 6 squadrons. After the successful crossing of the Rhine by an Allied army led by Ferdinand of Brunswick on May 31, the two squadrons inherited from the disbanded Polleresky regiment retired towards Rheinberg where they joined Clermont's Army on June 2. They remained in this camp until June 12. Meanwhile, the four original squadrons had left their winter-quarters in the County of Hanau at the beginning of June to reinforce Clermont's Army on the Lower Rhine. By June 12, they were still on their way. By June 23, the entire regiment had joined Clermont's Army and took part in the Battle of Krefeld where it formed part of the reserve, under M. de Turpin. During this battle, officers Freytag and Klebert and cornet Lessel were wounded. In Mid August, after Ferdinand's retreat to the east bank of the Rhine, the regiment, as part of the Army of the Lower Rhine now under the Marquis de Contades, recrossed the Rhine for an offensive in Westphalia. On August 20, it was encamped near Wesel where it formed part of the Reserve.

On March 13 1759, upon Broglie's request, d'Armentières sent a corps (1,400 foot and 1,200 horse, including Turpin Hussars) under the command of d'Auvet. This corps took post at Hachenburg with detachments at Siegen. By May 10, the regiment was part of the corps under the command of d'Armentières who had taken position at Düsseldorf. The regiment was deployed on the frontier of the Duchy of Bergh. From June, it took part in the French offensive in Western Germany. On June 4, the regiment occupied Frankenberg. On June 13, as part of d'Auvet's Corps, the regiment encamped in front of the defiles near the village of Essentho on the left bank of the Diemel. During the night of June 13 to 14, Turpin Hussards, along with 1 regiment of light troops, approached the camp of Büren to observe the Allies, some skirmishes took place. On June 14, Turpin Hussards and some light troops reached Wünnenberg. On June 15, indecisive skirmishes took place between Leiberg and Wünnenberg between the light troops of both armies. Hanoverian hussars and jägers attacked the Volontaires of Chateau Thierry, Turpin Hussars and the Volontaires du Dauphiné. On June 19, when the Allied army evacuated its camp at Büren, elements of the regiment immediately occupied it. On June 30, French light troops harassed the Allied rear retreating from Rietberg to Marienfeld. A skirmish took place between Turpin Hussards and Bercheny Hussards and the Prussian Ruesch Hussars (3 sqns) and Malachowski Hussars (2 sqns) under Colonel Narzinsky. On July 5, Turpin Hussards and Bercheny Hussards reached Steinhagen. On July 6, the regiment skirmished with the Prussian Ruesch (Black) Hussars and some Hessian troops, losing more than 100 men taken prisoners. On July 7, the regiment advanced on Warendorf which the Allies evacuated. On July 15, the regiment occupied the village of Lübbecke near Minden. On July 28, Bercheny Hussards were attacked and driven out of Lübbecke by an Allied corps of 6,000 men under the Hereditary Prince of Brunswick. During their retreat, Bercheny Hussards were joined at the defile by Turpin Hussards, the Volontaire de Prague and the Volontaires de Muret. These French forces pushed back the Allied detachment pursuing the Volontaires du Hainaut. The regiment then joined Brissac's Corps at Gohfled. On August 1, the Allied corps of the Hereditary Prince attacked and defeated Brissac in the engagement of Gohfeld. By August 31, the regiment was attached to Chabot's Light Corps. On September 20, during the Allied counter-offensive in Western Germany, the regiment formed part of a force who took position on the heights of Wetzlar to prevent the Allies from passing the Lahn. On Friday November 30, an Allied force under the Hereditary Prince launched a surprise attack on Fulda, a detachment of the regiment was in the neighbourhood as part of Nornmann's Brigade but this French force did not intervene in the affair.

By the end of January 1760, the regiment had taken its winter-quarters in the third line of the French army along the Rhine and the Main from its mouth. By May 23, the regiment was part of the left vanguard of Broglie's Army. On July 10, the regiment took part in the Combat of Corbach where it was attached to Broglie's vanguard under the Baron de Clausen, deployed in the wood to the left of Corbach at the beginning of the action. At the end of the combat, when the Allies retired, Prince Camille de Lorraine, galloping ahead of his cavalry corps took command of Beaufremont Dragons and Turpin Hussards and charged on retiring troops near the watchtower hill. So hard were Allied units pressed that the Hereditary Prince only extricated them by putting himself at the head of two squadrons of the 1st Dragoon Guards and 3rd Dragoon Guards and leading them to a desperate charge against the French hussars and the Beaufremont Dragons. On August 2, the regiment was part of the corps sent by Broglie, under the command of the Prince de Condé, to dislodge the Légion Britannique from the woods to the left of his army. The Légion Britannique abandoned the woods without opposing resistance. On August 6, the regiment replaced the Chasseurs de Fischer at Westheim. On the night of August 21 to 22, the regiment took post at Udenhausen with Saint-Victor's vanguard. On August 30, the Prince de Condé at the head of a strong corps (Volontaires Étrangers de Clermont Prince, Volontaires du Dauphiné, grenadiers and chasseurs of the army) took dispositions to attack Zierenberg. However, the attack was cancelled when the Allies retired from Zierenberg to the camp of the Hereditary Prince at Breuna. The Prince de Condé immediately threw the Volontaires Étrangers de Clermont Prince and the Volontaires du Dauphiné into Zierenberg and posted Turpin Hussards at Bodenhausen. By December 30, the regiment had taken its winter-quarters in Siegen and surroundings. 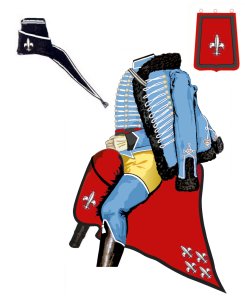 Uniform in 1758
Source: Richard Couture from a Not By Appointment template

N.B.: contrarily to the 1752 ordonnance, Raspe in 1760 illustrates the mirliton, braid and laces in black, the distinctive colour of the regiment.

N.B.: surprisingly, the Etrennes Militaires of 1756 and 1758 clearly states that the dolman, breeches, mirliton and saddlecloth were ventre de biche (light buff). This would be contrary to the 1752 ordonnance and does not correspond to the illustration in Raspe for 1760. All other sources stated simply mention a sky blue uniform with white braid and trims.

From 1761, under Chamborant, trumpeters of this regiment wore a yellow coat with a white collar, white facings and white linings. The waistcoat was white, the chashkiry light ochre. They also wore hussar boots.

The regiment had swallow-tailed silken guidons fringed in gold and silver. Cords and tassels were made of mixed silver and blue silk threads.