Difference between revisions of "Ultonia Infantry"

This Irish regiment was initially supplied by France and entered into the Spanish service according to an ordonnance issued on 29 October 1709. It was formed of Irishmen exiled during the Nine Years' War (1688–97) and from Irish or British prisoners captured during the previous campaigns of the current war. The recruitment of its single battalion (13 companies of 50 men each) was completed in 1710 in Aragon. It was then named Mac-Auliff and counted 408 men.

During the War of the Spanish Succession, in 1710, the regiment assembled in Zaragoza. It fought against the rebels in Aragon and took part in the blockade of Monzón in the Province of Huesca. On July 27, it fought in the Battle of Almenar. On August 11, it participated in the Combat of Peñalba. On August 20, it was at the defeat of Zaragoza and followed the army in its retreat towards Castile. Under the Duc de Vendôme, the regiment took part in the recapture of Toledo and Madrid. It then participated in the siege of Brihuega which surrendered on December 9. On December 10, the regiment fought in the victorious Combat of Villaviciosa which put an end to the struggle in Spain and confirmed the throne of Philip V. In 1711, the regiment was transferred to Catalonia where it made itself master of boats on the Ebro River and resupplied Gerona. It also took part in the Siege of Cardona. It was then sent to Aragon where it garrisoned at Teruel. In 1712, the regiment distinguished itself at an action near Benabarre in the Province of Huesca, where it routed a party of rebels and pursued them into the Rivagorza Valley. The regiment was later assigned to the garrison of Rosas and defended it against the last attacks of the Allies. It then returned to Teruel. In 1713, it campaigned in Catalonia under General Vallejo and fought against Catalan units of migueletes and somatenes irregulars, chasing them through Catalonia and defeating them at Prats de Llusanés. In 1714, it took part in the siege of Barcelona which surrendered on September 11. In 1715, it was allocated to Asfeld's Army, charged to reconquer Majorca. On June 17, it was at the attack of Alcudia; on June 29, at the capture of Palma. In 1716, the regiment returned to Barcelona.

According to a regulation issued on February 10 1718, the regiment was renamed “Fijo de Ultonia”. The same year, it took part in the expedition in Sicily and in the sieges of Messina and Milazzo. In 1719, it fought in the Battle of Francavilla. In 1720, it evacuated Sicily and returned to Spain where it garrisoned Valencia. In 1722, the regiment was transferred to the garrison of Zaragoza in Aragon.

In 1727, the regiment took part in the unsuccessful siege of Gibraltar.

In 1731, the regiment was cantoned around Barcelona. In 1732, it marched to Valencia where 9 companies embarked for North Africa to relieve Oran. In 1733, it defended Oran where it would remain until 1737 when it returned to Alicante in Spain.

On August 5 1738, the disbanded “Regimiento de Infanteria de Santiago” was incorporated into the present regiment as its second battalion.

In 1741, the regiment returned to Oran to form part of its garrison.

During the War of the Austrian Succession, in 1745, the regiment was transferred from Oran to Italy where it took part in the siege and capture of Tortona. In 1746, it served in the region of Genoa. In 1748, it fought in the action of Borgonuovo near Chiavari. In 1749, it defended Genoa before re-embarking for Barcelona.

In 1755, the regiment was stationed in the District of Galicia where it garrisoned Ferrol, Coruña and Vigo.

The regiment was disbanded in 1818.

In 1760, the regiment was transferred from Galicia to Catalonia and entered into the place of Lérida.

In 1762, the regiment set off from Lérida for Old Castile. On April 17, it reached Zamora. Shortly afterwards, it was attached to the second brigade of the second line of the army destined to the invasion of Portugal. It passed the Douro River and took post at Ifanes in an attempt to cut the line of retreat of the Portuguese garrison of Miranda do Douro. But before it could lay siege to Ifanes, the powder magazine exploded and the present regiment along with Irlanda Infantry penetrated into the place through the breach opened by that explosion and occupied the citadel. On May 12, a detachment of the regiment occupied Bragança, evacuated by the Anglo-Portugueses. By September 6, the regiment was at Aldea Nova (more probably Aldea de Obispo near Salamanca) in Spain, attached to the division of General Mendoza who advanced towards the Tagus River and effected a junction with the rest of the army at Castelo Branco. Under the command of Brigadier Alejandro O'Reylly, the regiment defeated guerilleros who were harassing the lines of communications of the army. On September 28, it made a reconnaissance of the enemy positions at “Las Talladas”. The Portuguese finally abandoned these positions and, on October 16, the regiment returned to Castelo Branco. On November 14, it marched to the District of Extremadura where it took up its cantons at San Vincente to prepare for the siege of Elvas.

In 1763, the regiment marched to the District of Old Castile and took up cantons in towns along the Portuguese frontier. 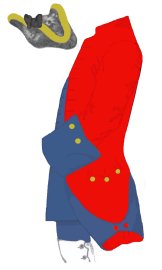 Volker Scholz for the information provided on colours.