Commander-in-chief of the Swedish field army in Pomerania (1757) 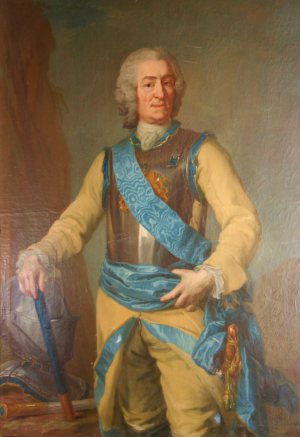 Mathias Alexander von Ungern-Sternberg - Source: photo taken by Gunnar W. Bergman by courtesy and permission of the "Riddarhuset" in Stockholm.

In 1706, when he was 17 years old, Ungern-Sternberg joined the French Army. He soon became sub-lieutenant in Colonel Lenck's regiment.

On July 11 1708, Ungern-Sternberg was taken prisoner in the battle of Oudenarde.

In 1709, Ungern-Sternberg switched master and entered into the Dutch service and, on September 11, could witness the Allied victory at Malplaquet. Shortly after this, he went back to Sweden and joined Count Stenbock's army just before the battle of Helsingborg on March 10 1710 where he commanded a squadron of the famous Ascheberg's Dragoons.

In 1731, Ungern-Sternberg was promoted colonel of the Lifregimentet till häst (Royal Horseguards).

At the outbreak of the Finnish war in 1742, Ungern-Sternberg was forced against his will to participate in the operations. However, before the end of the year, he managed to leave the army and to return to Stockholm where, as lantmarskalk (land marshal or vice-chairman), he led the Swedish nobility and conducted the stormy meeting of the Riksdag of the nobles in the Riddarhuset in Gamla Stan. His involvement in politic as well as his role of vice-chairman of the nobility significantly boosted his military career.

During the campaign of 1757 in Pomerania, the able French ambassador in Stockholm, the Marquis Louis d'Havrincourt, asked for the replacement of Ungern-Sternberg. France had a saying in the command of the army because it subsidized the Swedish participation in the war. To the defence of Ungern-Sternberg, one must say that he was totally crippled by the total lack of any reconnaissance troops. Anyhow, in December 1757, it was Ungern-Sternberg who took the initiative to make a contract with the Pomeranian Captain Count Fredrik Ulrik Putbus of the Posseska Infantry regiment to raise a unit of hussars. In the beginning, Putbus raised 200 hussars, soon known as Blå Hussars. These where the first Swedish troops who had some ability to perform any reconnaissance at all. At the beginning of a very harsh winter, Ungern-Sternberg's army suffered from the aggressive attacks of the Prussian corps under the command of Hans von Lehwald. Field-marshal Ungern-Sternberg was a realist and he fully realised that it would be suicide to counter-attack Lehwald's well trained troops. Accordingly, he wrote to the Rådet (King's Council and actual government) that he was sorry to have to retreat because of the strong enemy forces, the lack of light troops and the harsh winter. He then asked to abandon his command and to be replaced. He was succeeded by General Gustaf Fredrik von Rosen.

Later, the four chambers of the Riksdagen parliament considered that Ungern-Sternberg had done everything to the best of his ability. Accordingly, on July 5 1762, he received a letter from the King's Council, confirming that he could keep his pay as a general.

Gunnar W. Bergman for the initial version of this article and for the photo taken at the "Riddarhuset" in Stockholm.