The regiment was created as per a commission dated March 1, 1674, at the moment when a Dutch fleet threatened the coasts of Guyenne. It was raised at Montpellier by the Marquis de Castries. The unit would remain a gentleman’s regiment until December 1762, being known by the names of its successive colonels.

In 1674, during the Franco-Dutch War (1672-78), the regiment initially garrisoned Montpellier. In 1677, it was transferred to the Army of Catalonia and took part in the Battle of Espouilles. In 1678, it was at the siege of Puigcerdà where it then remained as garrison.

In 1681, the regiment was selected for the secret expedition against Casale in Montferrat.

In 1683, the regiment was sent to Languedoc to quench a Protestant uprising. In 1684, it was transferred to Catalonia where it took part in the siege of Girona.

In 1727, the regiment took part in the training camp on the Sambre. In 1731, it was employed to guard Infant Don Carlos of Spain during his sojourn in Montpeller.

In 1733, at the outbreak of the War of the Polish Succession (1733-35), the regiment was sent to Italy where it took part in the sieges of Gera d’Adda and Pizzighetone. In 1734, it participated in the capture of Serravalle, Novare, Tortona and Mirandola, in the attack on Colorno, and in the Battles of Parma and Guastalla; in 1735, in the submission of Revere.

In 1736, the regiment returned to France where it was stationed at Briançon.

In January 1739, the regiment was sent to Corsica where it distinguished itself in the combats of San-Giacomo and Bigorno.

In 1741, at the beginning of the War of the Austrian Succession (1740-48), the regiment was recalled to France where it was posted on the coasts of Provence until 1744. In 1744, it crossed the Var and contributed to the capture of all the forts surrounding Nice, to the reduction of Château-Dauphin and Démont, to the siege of Coni and to the Battle of Ivrea. In 1745, it took part in the sieges of Tortona, Novare, Serravalle, Acqui, Alessandria, Casale, Pavia, Piacenza and Valenza, and in the Combat of the Tanaro. In 1746, along with Lyonnais Infanterie, the regiment had been thrown into Asti to defend the town. It had to surrender and was exchanged in 1747. On July 1, 1747, the regiment was increased to two battalions. It then continued to serve in the Alps till the end of the war.

On October 30, 1748, the regiment was reduced to a single battalion. But on March 10, 1749, it received the disbanded Luxembourg Infanterie as its second battalion.

During the Seven Years' War, the regiment ranked 58th and was under the command of:

In December 1762, when the French army was reorganised, the regiment took the name of the Province of Vexin.

In 1757, the regiment was with the Army of the Lower Rhine under the Maréchal d'Estrées for the planned invasion of Hanover. It was initially in the vanguard under the Marquis de Beauvau and, on April 24, occupied Münster without resistance. At the end of June, it was encamped at Bielefeld with d'Estrées' main corps. It took part in the campaign in Hanover. After the Convention of Kloster-Zeven on September 8, by which the Allied army capitulated, it followed the main body, now led by the Maréchal de Richelieu, who encamped at Halberstadt in Prussian territories from September 28 to November 5. The regiment was placed in the centre of the second line. At the end of the year, it took up its winter-quarters in the first line of the French Army in Wolfenbüttel.

In February 1758, when Ferdinand of Brunswick launched his winter offensive in western Germany, the regiment retired on the Rhine with the rest of the French army. From March 30 to April 4, it was in the second line of Clermont's Army in the camp of Wesel on the Lower Rhine. In April, when Clermont redeployed his army along the Rhine, the regiment was placed in the second line at Kerpen. After the successful crossing of the Rhine by Ferdinand's Army on May 31, the regiment retired towards Rheinberg where it joined Clermont's Army on June 2 and remained in this camp until June 12. It was placed in the centre of the second line. On June 25, it entered into Düsseldorf with two other French battalions and 8 Palatine battalions.

In June 1759, during the French offensive in western Germany, the regiment was part of the main army under the command of the Marquis de Contades and was deployed in the first line of the infantry centre. On August 1, the regiment took part in the Battle of Minden where it was deployed in the first line of the infantry left wing under the command of Guerchy. It suffered heavy casualties: Colonel Vastan was wounded and taken prisoner; Captains de Baillet, de Mont and Dumerbion, and Lieutenants de Caumont and de Brest were killed; Lieutenant-Colonel de Maulmont, Captains La Fare, Bellocq, Coste , Mandron, de Portetz, de Vinouse, Laurencin, La Roque, Granchin, Aide-Major La Roque and 6 lieutenants were wounded. After this battle, the regiment was sent back to France to be rebuilt.

By the end of January 1760, the regiment had taken up its winter-quarters in the third line of the French army along the Rhine and the Main from its mouth. By mid March, the regiment was billeted in Bingen, still in the third line. By May 23, it was part of the second line of Broglie's Army, placed under the command of the Prince de Croy. On July 31, during the Battle of Warburg, the regiment was attached to the Corps of the Maréchal-de-Camp de la Morlière posted at Welda, 6 km to the south of Warburg in support of de Muy. On October 16, the regiment arrived in Düsseldorf to reinforce Castries' Corps.

On July 16 1761, the regiment was present at the Battle of Vellinghausen where it was attached to the first line of the infantry centre of the Army of the Lower Rhine. In October, after the capture of Wolfenbüttel, the Marquis de Vastan with a battalion of his regiment (about 500 men), 300 horse and a gun encamped at Oëlper near Brunswick. On October 3, Prince Ferdinand of Brunswick at the head of 6 battalions and 12 squadrons led by Colonel Lückner attacked Vastan's camp at Oëlper. Vastan's battalion was captured after losing some 250 men, Vastan himself being killed during the combat. The Allies lost about 200 men in this action. The decimated Vastan regiment was given to the Marquis de Bouillé.

In 1762, the regiment was sent back to Saint-Brieuc in France.

In May 1763, the regiment was transferred to Lorient. 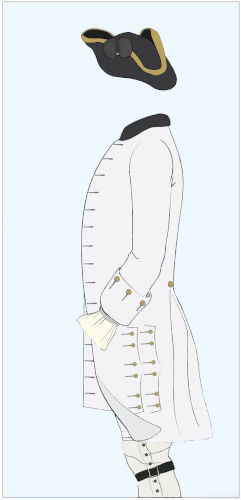 The drummers of the regiment wore the livery of the colonel (Vastan then Bouillé).

The arms of the House of Vastan were painted on the drums and consisted of a golden field with five red triangles.

The arms of the House of Bouillé consisted of a red field with a silver moline cross.

In 1762, when the unit became a provincial regiment, drummers took the Royal livery.