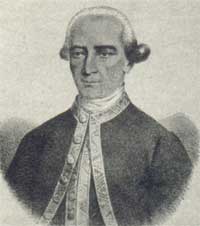 Detail of a painting

In 1726, at the age of 15, Velasco entered the Spanish Royal Navy as a midshipman.

In 1727, Velasco took part in the second siege of Gibraltar. During his subsequent service, he took part in expeditions against the Barbary pirates.

In 1732, Velasco took part in the recapture of Oran.

At the beginning of the War of the Austrian Succession, in June 1742, Velasco, commanding a 30-guns frigate, was patrolling the trade route between Veracruz and Havana when he encountered a larger English frigate accompanied by a brig. Velasco rapidly attacked the frigate before the brig could come to her support. He cannonaded the frigate at short range and then boarded and captured her. Velasco then directed his attention to the small brig who soon surrendered. Velasco later entered the harbour of Havana with his two prizes and a large number of prisoners (about twice his own crew).

In 1746, as Velasco was patrolling with xebecs on the north coast of Cuba, he boarded and captured another English frigate (36 guns and 150 men).

On March 20 1754, Velasco received command of the ship of the line Reina (70) from king Ferdinand VI.

In 1762, when Spain joined France in the Family Compact to fight Great Britain, a powerful British expedition (23 ships of the line, 24 frigates, 150 transports and 14,000 soldiers) undertook the siege of Havana which lasted from June 6 to August 14. On June 7, the British landed 10,000 men under the command of count Albermarle.

On June 8, Velasco was assigned to the command of the fort of Tres Reyes del Morro. Velasco immediately took measures to prepare and provision the fort for a siege.

By June 29, the British batteries had increased their daily direct hits on the Morro to 500. Velasco was now losing some 30 men a day. Each night was dedicated to the repair of the fortress. The task imposed to the garrison was so exhausting that a rotation had to be established.

On July 1, the British launched a combined land and naval attack on the Morro. The fleet detached 4 ships of the line for this purpose. The naval and land artilleries simultaneously opened fire on the Morro. Leaving command of the batteries to Bartolomé Montes, Velasco assumed personnal command of the 30 guns of fort Santiago against the British ships of the line Stirling Castle (70), Dragon (74), Marlborough (68) and Cambridge (80), forcing them to retire after a combat of 6 hours. The Cambridge (80) was seriously damaged during this action. Meanwhile, the batteries under Montes also repulsed the British.

By July 17, new British batteries had progressively silenced most of Velasco's guns. Indeed, only two were operational.

On July 20, the progress of siege works allowed the British to begin the mining towards the right bastion of the Morro.

On July 24, Albemarle offered Velasco to surrender, allowing him to write his own terms of capitulation. Velasco answered that the issue would rather be settled by force of arms.

At 1:00 PM on July 30, the British detonated the mine. The debris of the explosion partly filled the ditch but the passage was still difficult. Nevertheless, Albemarle launched the assault, sending 699 picked men against the right bastion. Before the Spanish could react, 16 men had already gained a foothold on the bastion. Velasco then rushed to the breach with his troops. He was mortally wounded during the ensuing hand to hand fighting. Once the British in control of the Morro, Velasco was transported to Havana.

At 9:00 PM on July 31, Velasco, the heroic defender of the Morro died of his wound. Havana surrenderd on August 14.

In recognition for his services, king Charles III granted a pension to Velasco's widow and a peerage to his brother. Furthermore, the king ordered a commemorative coin to be minted in his honour and stipulated that from now on a ship named Velasco would always be part of the Spanish army.

This article incorporate texts from the following articles: