During the War of the Austrian Succession, in 1741 and 1742, the regiment initially served with the army who invaded Bohemia. In 1746, it served in Italy, taking part in the battles of Piacenza (June 16) and Rottofreddo (August 12). In 1747, it retreated to Provence with the rest of the French army. In 1748, it was at Valence in Provence.

When the French Cavalry was reorganised on December 1, 1761, the regiment was incorporated into La Reine Cavalerie. Effective incorporation seems to have taken place only on March 30, 1763 at Saint-Mihiel.

By August 1, 1757, the regiment was garrisoning Le Puy in Languedoc.

At the beginning of the summer of 1758, the regiment joined the Army of the Lower Rhine now under the Marquis de Contades. In Mid August, after the retreat of the Allied army of Ferdinand of Brunswick to the east bank of the Rhine, the regiment, as part of Contades's Army, crossed the Rhine to follow the retiring Allies. On August 20, it was encamped near Wesel where it was placed on the left wing of the second line. At the end of September, the regiment was part of Fitzjames's Corps sent as reinforcements to the Prince de Soubise in Hesse. On October 10, it was present at the Battle of Lutterberg where it was part of the Reserve of cavalry. 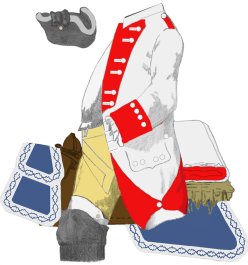