The roots of the Canon family can be traced back to Mirecourt (Vosges) in France. Some of them have been important persons at the court of the dukes of Lorraine.

On March 14 1626, Pierre Canon, a lawyer in Mirecourt, received a title of nobility by decree of the Duke of Lorraine. His son Claude-Francois (1628 – 1698) was President of the court at Lothringen-Bar. He was appointed baron of the Holy Roman Empire and received the Polish title “Demblinsky de Canon”. On November 5 1687, he got the Inkolat (a series of rights reserved to nobility) in the Kingdom of Bohemia. His wife was Petronella Dufour and their son Charles, Marquis de Ville-sur-Illon bought an estate near Brieg (present-day Brzeg/PL). From 1741, he was Chamberlain on the Court in Vienna. Four of his grandsons served in the Austrian Army and were adopted by the Hungarian estates. The fifth of his sons (Jean-Charles-Gabriel) remained in France and reached the rank of general of cavalry.

Charles-Joseph Marquis Canon de Ville was born May 25 1711 in Nancy in France, according to the records of the Parish of Saint-Epvre in Nancy).

In 1728, at the age of 17, Charles-Joseph joined the Austrian Locatelli Cuirassiers.

In 1731, his regiment assumed garrison duty in Hungary. Afterwards, it was briefly stationed in Vienna and, in 1737, returned to Hungary.

In 1732, Charles-Joseph was promoted to captain.

In 1737, the regiment became the property of Karl Count Saint-Ignon. In November, Charles-Joseph was promoted to major in this regiment.

In 1738 and 1739, Charles-Joseph was still part of this regiment when it took part in the war against the Turks.

On November 10 1740, Charles-Joseph got the confirmation of the Bohemian Inkolat previously obtained by his ancestor. On November 13, he married Johanna Countess Heißler von Heitersheim in Brünn (present-day Brno/CZ). The same year, at the outbreak of the War of the Austrian Succession, his regiment joined the corps of Field-Marshal Lobkowitz.

For the campaign of 1742, the Saint-Ignon Cuirassiers were still attached to Lobkowitz's Corps who, in February, retired from Iglau (present-day Jihlava/CZ) to Southern Bohemia in front of the advancing Franco-Saxon Army was marching towards Iglau. At the end of May, it retired to Budweis (present-day České Budějovice/CZ). It took its winter-quarters in Swabia.

On January 14 1744, Charles Canon Marquis de Ville was appointed colonel and commander of the Saint-Ignon Cuirassiers. In the Spring, his regiment marched against France as part of the Austrian Army. On May 31, the regiment passed the Neckar at Heilbronn.

During the campaign of 1745, the Saint-Ignon Cuirassiers served with the main army of Charles de Lorraine, in Berlichingen's Corps. This army along with the Saxon Army went to Silesia. On June 4, de Ville and his regiment took part in the Battle of Hohenfriedeberg (present-day Dobromierz/PL). On September 30, de Ville also fought in the Battle of Soor (present-day Ždˇár/CZ). His regiment was with two other cuirassier regiments in the second line of the right wing. This brigade was under FML Karl Saint-Ignon. Charles de Lorraine lost this battle and his defeated army retreated through Königshahn (present-day Královec/CZ) to Horschitz (present-day Hořice/CZ). The cuirassiers took their winter-quarters around Turnau (present-day Turnov/CZ).

On August 17 1751, the Marquis de Ville was promoted major-general (GFWM). Friedrich Count Pellegrini then replaced him as regiment commander.

At the beginning of the Seven Years' War, during the Prussian invasion of Bohemia in 1757, de Ville received command of a cavalry brigade consisting of Erzherzog Leopold Cuirassiers and Erzherzog Joseph Dragoons. In the Ordre de Bataille, his brigade is mentioned in the first line of the right wing. On May 6, he took part in the Battle of Prague at the head of his brigade which belonged to the division of the Marquis de Spada standing between the houses called “U cihelny” and Hill No. 233. On November 22, de Ville's Brigade fought in the Battle of Breslau (present-day Wroclaw/PL) where it was deployed in the first line of the right wing as part of Lucchesi's Division. On December 5, de Ville's Brigade took part in the Battle of Leuthen (present-day Lutynia/PL) where it was once more attached to Lucchesi's Division. After this disastrous battle, the Austrian army retreated to Neustadt (present-day Sroda Slaska/PL) and than to Bohemia. By a decree dated December 8, de Ville was promoted to Fieldmarschall-Lieutenant (FML).

At the beginning of 1758, de Ville assumed command of a corps consisting of some cavalry regiments, line infantry and a few hundreds Grenzers. He first operated on the border between Silesia and Moravia. In January, de Ville was instructed to disrupt the lines of communications of the Prussians. In the night of February 17 to 18, he planted four batteries on the hills overlooking Troppau (present-day Opava/CZ). Seeing this, Saldern, the Prussian commander of the place, evacuated the town and de Ville immediately occupied it. On February 19, the Prussian Stechow Dragoons arrived in the vicinity of Troppau, ignoring that it was now occupied by Austrian troops. Károly Hussars along with some Saxon Uhlans and “Karlstädter Grenzers” attacked Stechow Dragoons, killing many and taking 9 officers and 260 men prisoners. The rest of the regiment flee. During the Prussian invasion of Moravia, when de Ville realised that Frederick II intended to lay Siege to Olmütz (present-day Olomouc/CZ), he let his infantry and 100 Károly Hussars in the city and occupied Prostějov/CZ with his cavalry, sending 300 hussars to occupy Olschan (present-day Olšany/CZ). At the beginning of May, he sent 100 Uhlans to Plumlov/CZ to maintain communication with Loudon's troops and another 400 horse with 200 hussars to Tovačov/CZ. The rest of the Károly Hussars were ordered to defend the bridge at Litovel/CZ, thus completing the encirclement of the Prussian army. On May 4, two Prussian bns supported by a few guns and hussar sqns attacked the Austrian hussars posted at Litovel. The hussars defended themselves for a while and retired at night as order by de Ville. Frederick then decided to push de Ville back from Prostějov. On May 13, de Ville evacuated his troops and took new positions at Rousínov/CZ. Prussian hussars then attacked Herzog Württemberg Dragoons posted near Drysice/CZ under GFWM Jean-Antoine Saint-Ignon but they have been driven back. Furthermore, the Prussian Werner Hussars was dispersed by Birkenfeld Cuirassiers and Modena Cuirassiers. On May 23, the Prussians having retired to their former positions, de Ville occupied Vyškov/CZ. At the end of June, during the attack on the great Prussian convoy in the Combat of Domstadl (present-day Domašov/CZ), de Ville supported Loudon's Corps with 3 bns of Toscana Infantry and a few cavalry regiments. On July 8, de Ville was promoted to General of Cavalry (General der Cavallerie, G.d.C). On December 4 in the third promotion of the Maria-Theresia-Order (MTO), de Ville received the Knight Cross of this military order in acknowledgement of his conduct during the last campaigns.

For the campaign of 1759, de Ville commanded a corps of 25.000 men operating in Moravia and Silesia. He was later instructed to defend the magazines at Görlitz in Upper Lusatia. The same year, he became proprietor of the former Gelhay Cuirassiers who belonged to his corps. At the end of September, de Ville fell ill and his corps rejoined the main army.

On May 27 1768, de Ville bought the estate of Rešice near Hrotovice in Southern Moravia from Baron Jakob McElliot. He probably spent the last years of his life at the Castle of Rešice. 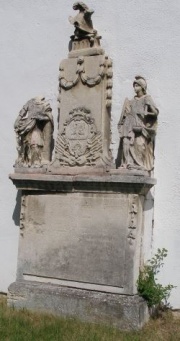 Memorial stone of Marquis de Ville outside the Church of St. Peter and Paul in Horní Dubňany, photo made by Jiří Vaněk

As per the register of the Parish of Rešice, Charles Canon Marquis de Ville died on February 29 1792 at the Castle of Rešice. He was buried in the church of St. Peter and Paul in Horní Dubňany (Southern Moravia). His epitaph engraved in stone can still be seen on the wall of the church. His daughter Maria Anna, married with Christian Karl Count Callenberg inherited his estates.

After de Ville's marriage with Johanna Heißler Countess von Heitersheim in 1741, the couple lived some years in Brünn (present-day Brno/CZ). As per the register of the Parish of St Jakob in Brünn, two of his daughters were born in the Palace of Schrattenbach in Brünn.

In the older literature, it is mentioned that de Ville has had no children. However, the aforementioned register of St. Jakob indicated the following birthdays:

His son Emanuel Karl had a handicap since childhood and could therefore not serve in the army as his father. He had an career in the administration as gubernatorial councillor and associate judge at the judicial court of Brünn. His wife was Cajetana Francisca Countess von Blümegen, daughter of Christoph Count von Blümegen, the most influential minister of Maria Theresa and her confidant.