The unit was raised on June 1, 1756 by Colonel Fischer to serve at sea and as garrison in the French colonies. Recruitment problems impeded the formation of the unit when its destination became known. Most of the recruits were German. The unit initially counted 3 battalions of about 911 men. In 1756 and 1757, its 3 battalions were sent to Bretagne.

By 1758, the second battalion comprised:

The second battalion was disbanded towards the end of 1758. 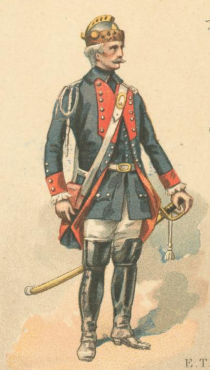 On January 27, 1759, the first and third battalions were amalgamated into a single unit and renamed “Volontaires Étrangers de Vignolles”. The new unit comprised:

On November 22, 1759, when the French light troops were reorganised, the unit changed its name to “Volontaires d'Austrasie”. It then consisted of 948 men.

Initially, there were no commanders for the entire unit. However, each battalion was placed under the command of a lieutenant-colonel:

During the Seven Years' War, the unit was commanded by the following colonel-commandants:

The unit was disbanded in December 1762 and its troops incorporated into the Légion du Hainaut.

By August 1, 1757, the battalion was stationed at Vire in Lower Normandy.

On September 11, 1758, the battalion took part in the victorious Combat of Saint-Cast.

On January 27, 1759, all battalions remaining in Europe were amalgamated into a single corps.

By January 1757, the battalion was garrisoning Avranches in Lower Normandy.

On April 8, 150 volunteers under the command of M. de Saint Rome, with 6 eight-pdr cannon and 18 six-pdr cannon, embarked aboard the Robuste (74) in the estuary of the Gironde and sailed for Canada. On their way, a British frigate attacked the Robuste on three occasions, forcing her to turn back. On her way to France, the ship was once more attacked by a British privateer but managed to reach the Perthuis d'Antioche near the island of Ré.

On March 22 ,1758, the battalion left France with drafts from the 3rd battalion to serve in Canada. Indeed, it was part of the reinforcements sent from Brest to Louisbourg aboard du Chaffault's Squadron. The battalion took part in the defence of Louisbourg which finally surrendered on July 26, the battalion becoming prisoners of war. In mid-August, prisoners not disabled by wounds or sickness were embarked for Great Britain.

On January 27, 1759, the battalion, which had been exchanged, was sent to the Antilles.

At the end of 1756, the battalion operated in Germany with the French army.

In November 1757, during the Franco-Imperial invasion of Saxony, the battalion was engaged and roughly handled by the Prussian Frei-Infanterie von Mayr.

On January 27, 1759, all battalions remaining in Europe were amalgamated into a single corps.

On January 27, 1759, the 1st, 3rd and 4th battalions were amalgamated into a single unit and renamed “Volontaires Étrangers de Vignolles”. On November 22, when the French light troops were reorganised, the unit changed its name to “Volontaires d'Austrasie”. From June, the corps (now estimated at only 751 men) took part in the French offensive in Western Germany. By August 31, the main unit was attached to Chabot's Light Corps. By September 25, the unit was deployed at Grossen-Buseck near Annerod. Meanwhile, in the summer and autumn, a few companies had been assigned to Thurot's squadron which was blockaded in the harbour of Dunkerque by a British squadron under the command of Commodore William Boys. In October, Boys's Squadron was driven from its station by a gale. On October 15 at 5:00 p.m., Thurot seized the opportunity, slipped out through a thick fog and made to the northward. He then sailed for Ostend, Göteborg and later Bergen.

In January and February 1760, the detachment assigned to Thurot's force took part in an expedition against the Irish Coasts. On February 28, Thurot's small squadron was engaged and captured. The French prisoners were brought to Ramsey on the Isle of Man then to Belfast where they arrived on March 2. On May 10, they were freed and transported to France.

By the end of January 1760, the unit had taken its winter-quarters in the third line of the French Army along the Rhine and the Main from its mouth. On May 25, the unit was part of Prince Xavier's right reserve who advanced towards Lohr. On July 31, the Saxon Contingent along with La Marck Brigade drove Kielmansegg's Corps out of its defensive positions. The Volontaires du Hainaut, Volontaires d'Austrasie and the dragoons then pursued Kielmansegg. On August 2, Prince Xavier marched from his encampment at Lutterberg at the head of the grenadiers and chasseurs of his corps and made himself master of the town of Münden by a coup de main, taking the 350 men of the garrison prisoners of war. The Volontaires d'Austrasie entered the place through a door while other troops scaled the walls. On August 8, an Allied detachment under Luckner attacked Einbeck, forcing the Volontaires d'Austrasie to retire to Harste where they were soon joined by a dragoon rgt and the Royal-Nassau Hussards. By December 30, the unit had taken its winter-quarters in Wanfried.

On February 2, 1761, during the Allied campaign in Hesse, Champagne Infanterie and the Volontaires d'Austrasie arrived at Mühlhausen where M. de Boisclaireau took command. Langensalza was occupied by 4 Saxon bns and Stainville's Corps was reinforced with the Légion Royale. On February 15, during the Combat of Langensalza, the unit was still posted at at Mühlhausen. On March 21, it took part in the Engagement of Grünberg. On March 25, M. de Montchenu's at the head of a detachment of his vanguard (Orléans Dragons brigade and mounted companies of the Volontaires de Flandre, Volontaires du Hainaut, Volontaires Étrangers de Clermont Prince and Volontaires d'Austrasie) drove the Allies out of the village of Mengsberg before catching up with Zastrow at Leimsfeld. Montchenu successfully engaged the Allied rearguard.

In March, 1762, the unit formed part of the Army of the Upper Rhine under the Prince de Soubise. On May 23 or 24, during the campaign in Western Germany, Luckner and Prince Frederick of Brunswick sent reconnoitring parties (including Riedesel Hussars and Frei Hussars von Bauer) towards Göttingen. These parties chased the French vanguard but Lieutenant-colonel Lahr of the Volontaires d'Austrasie sallied from Göttingen with dragoons and hussars to support the vanguard. Lahr was mortally wounded and his force driven back into Göttingen and the Allied parties captured 80 men and 100 horses before retiring once their reconnaissance completed. On June 24, the unit was present at the Battle of Wilhelmsthal. On July 10, M. de Vaux marched from Göttingen towards Uslar where the Volontaires de Flandre, Volontaires du Hainaut and Volontaires d'Austrasie chased the few Allied troops occupying the town before attacking the woods where they took more than 500 prisoners, including a lieutenant-colonel. However, Luckner's Corps, marching from Dassel, rapidly came to the support of the Allies and M. de Vaux retired to Göttingen. By July 21, the unit was attached to the army of the Prince de Condé. On August 30, Prince Xavier encamped at Windecken with the Saxon Contingent, 1 dragoon rgt and the Volontaires d'Austrasie. On September 5, Prince Xavier with the Saxon Contingent, a regiment of German cavalry, 1 sqn from Fitz-James Cavalerie and the Volontaires d'Austrasie took position at Bergen to protect Frankfurt and the French magazines on the Rhine. On September 17, M. d'Arembures at the head of the Volontaires d'Austrasie successfully attacked Freytag's cavalry, taking several prisoners. On November 20, Louis XV issued his instructions regarding the French armies serving in Germany, specifying which units should return to France right away and which should stay in Germany till the final evacuation. The present unit was among those that remained in Germany.

Uniform of the Volontaires Étrangers

The musicians of the unit wore the livery of its colonel which is unfortunately unknown.

Uniform of the Volontaires de Vignoles and d'Austrasie

Armaments consisted of a musket with a bayonet and a short sabre.

Officers wore a uniform similar to the one of the privates with the following exceptions:

Drummers and fifers wore the colonel's livery which is unfortunately unknown.

Although dragoons are not mentioned in the contemporary Etats Militaires, Pajol describes the following uniform for dragoons of Autrasie: red coat, waistcoat, lapels, turnbacks, cuffs and collar; blue housings and schabraque; helmet à la Scomberg. This might be the strange helmet illustrated in Raspe's publication of 1762. 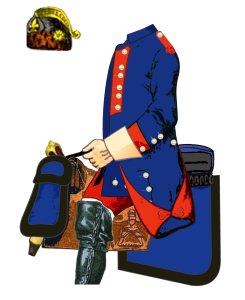 Volontaires d'Austrasie - Uniform of the dragoons in 1759 - Source: Frédéric Aubert

Colours of the Volontaires Étrangers

Regimental guidon for the dragons of the Volontaires d'Austrasie in 1759: not mentioned in the 'États Militaires' but, following the colours of the infantry flag, we have made this proposal:

This article is mostly a translation Jean-Louis Vial's article “Volontaires Étrangers” published on his website Nec Pluribus Impar. The article also incorporates texts from the following books which are now in the public domain: