By the end of March 1757, the Volontaires du Hainaut counted 462 men (including staff) and consisted of:

In December 1762, the unit incorporated the Volontaires d'Austrasie.

In 1768, the Légion du Hainaut was renamed Légion de Lorraine which was finally disbanded in 1776.

In 1757, as part of the Army of the Lower Rhine, the regiment was among the light troops of the army of the Comte d'Estrées for the planned invasion of Hanover. On March 23 of the same year, it consisted of 6 mixed companies (43 fusiliers and 33 dragoons each) for a total of 420 men. On July 21, the unit was part of the Comte de Maillebois's vanguard near Bergen and Fringheim. On July 23, the unit was part of the corps of the Marquis de Vogüé, consisting of 14 grenadier companies, the Volontaires de Flandre and the Volontaires de Hainaut, who occupied the heights of Apseste. On July 26, the unit took part in the Battle of Hastenbeck. It was in the vanguard of the column under Chevert who accomplished the flanking movement to attack the Hanoverian left wing in the woods. On December 12 at Garssen, during the Allied counter-offensive in Hanover, the unit skirmished the whole day against an Allied detachment under the command of Luckner. At the end of the year, it took its winter-quarters in the third line of the French army in Schosselburg.

In 1758, after the successful crossing of the Rhine by the Allied army of Ferdinand of Brunswick on May 31, the unit retired towards Rheinberg where it joined the army of the Comte de Clermont on June 2. Until June 12, it remained in this camp where it formed part of the Reserve. On June 28, some companies were part of a small detachment, under the command of M. de Boccard, occupying Roermond. Boccard surrendered the town to the Hereditary Prince of Brunswick, obtaining the honours of war and retiring to Liège.

From June 1759, the unit (estimated at 657 men) took part in the French offensive in Western Germany. On July 15, it occupied the village of Hille near Minden along with the Volontaires de Hallet. On July 28, they were attacked and driven out of Lübbecke by an Allied corps of 6,000 men under the Hereditary Prince of Brunswick. During their retreat, Bercheny Hussards, Turpin Hussards, the Volontaire de Prague and the Volontaires de Muret came to their support and pushed back the Allied detachment pursuing them. By August 31, the unit was attached to Chabot's Light Corps. By September 25, the unit was deployed at Wieseck near Annerod.

By the end of January 1760, the unit had taken its winter-quarters in the third line of the French army along the Rhine and the Main from its mouth. On May 25, the unit was part of Prince Xavier's right reserve who advanced towards Lohr. On June 20, Prince Xavier sent Bercheny Hussards and the Volontaires du Hainaut forward from Schlüchtern to reconnoitre the movements of the Hereditary Prince. In the morning, Bercheny Hussards were attacked by Luckner's White Hussars. The dragoons of the Volontaires du Hainaut were sent to the rescue and together with Bercheny Hussards, they drove back Luckner's White Hussars, taking 50 prisoners. On July 31, the Saxon Contingent along with La Marck Brigade drove Kielmansegg's Corps out of its defensive positions. The Volontaires du Hainaut, Volontaires d'Austrasie and the dragoons then pursued Kielmansegg. On November 17, Prince Xavier's Corps retired towards its winter-quarters. The unit was left behind under Lieutenant-General de Vaux as part of the garrison of Göttingen. By December 30, the unit had taken its winter-quarters in Wanfried.

By February 9, 1761, during the Allied winter campaign in Hesse, the unit formed part of the detachment of Lieutenant-General de Soupire, which was posted posted near Fulda. On February 14, the unit was part of Saint Pern's Division which was sent to Sontra. By March 18, it was attached to the right vanguard, under M. de Clausen, which was posted at Londorf and Geilshausen. On March 21, the unit was present at the Engagement of Grünberg. On March 25, M. de Montchenu's at the head of a detachment of the vanguard (Orléans Dragons brigade and mounted companies of the Volontaires de Flandre, Volontaires du Hainaut, Volontaires Étrangers de Clermont Prince and Volontaires d'Austrasie) drove the Allies out of the village of Mengsberg before catching up with Zastrow at Leimsfeld. Montchenu successfully engaged the Allied rearguard. M. de Vignolles repeatedly attacked a column of infantry who was retiring in good order between Frielendorff and Niedergrenzebach. Vignolles then charged a battalion forming the rearguard, capturing two flags. The column then fell in disorder and the French captured another flag, 2 guns, Majors-Generals Zastrow and Schlüter, a dozen of officers and more than 300 prisoners.

At the beginning of May 1761, during the French campaign in Western Germany, the unit formed part of the corps of Prince Xavier Comte de Lusace, assembled at Fulda. On August 25, the Volontaires du Hainaut, under the command of Colonel de Grandmaison surprised Freikorps von Gschray at Nordhausen, capturing de Gschray, his major, 5 captains, about 100 dragoons, 400 horses, the equipage and the chest of the regiment. After this action M. de Grandmaison retired to Eschwege. From December 6, the unit took up its winter-quarters in Langensalza.

For the campaign of 1762, the unit was attached to the Army of the Upper Rhine. On May 20, the unit covered the positions of the Saxon Contingent between Creutzburg and Wanfried on the left bank of the Werra. By June 21, it passed the Werra at Witzenhausen under the command of Prince Xavier to cover Witzenhausen and Münden and prevent Allied incursions into Hesse. On July 10, M. de Vaux marched from Göttingen towards Uslar where the Volontaires de Flandre, Volontaires du Hainaut and Volontaires d'Austrasie chased the few Allied troops occupying the town before attacking the woods where they took more than 500 prisoners, including a lieutenant-colonel. However, Luckner's Corps, marching from Dassel, rapidly came to the support of the Allies and M. de Vaux retired to Göttingen. On July 23, the unit was posted at Witzenhausen during the Combat of Lutterberg. On September 17, Castries attacked one of Hardenberg's redoubt and a mill near Schweinsberg with the Volontaires du Hainaut, taking all defenders prisoners. However, he was soon obliged to abandon this post because the Allies were still master of Amöneburg. He then took position at Roßdorf. On September 21, the unit took part in the Combat of Amöneburg, where it defended the bridge. On September 24, it was part of Poyanne's Corps, which marched to pass the Ohm at Burggemünden and then advance on the Schwalm. On November 21, a convention of neutrality was signed in Frankfurt. Soubise sent orders to the Volontaires du Hainaut and Bercheny Hussards, who were marching towards Würzburg against the Prussian corps of General Kleist, to interrupt their march. On November 20 1762, Louis XV issued his instructions regarding the French armies serving in Germany, specifying which units should return to France right away and which should stay in Germany till the final evacuation. The unit was among those that remained in Germany. 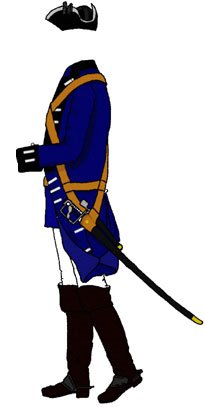 Although dragoons are not mentioned in the contemporary Etats Militaires, Pajol describes the following uniform for dragoons: blue coat lined black with white buttons, black lapels and cuffs, blue waistcoat; white breeches; helmet à la Schomberg (this might be the strange helmet illustrated in Raspe's publication of 1762). 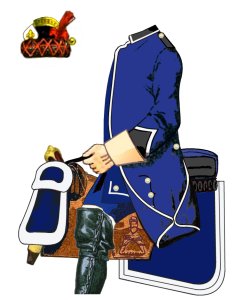 At the beginning of the Seven Years War: the unit retained the original colours of the Arquebusiers de Grassin.

Dragoon Guidons were fringed in gold with: 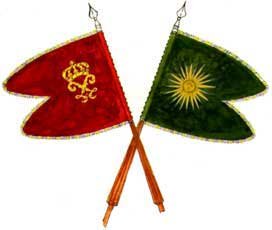 During the Seven Years War: it seems the unit adopts new colours.

Ordonnance Colours: white cross with the first and second cantons 1 half orange triangle and 1 half blue triangle in opposition and the third and fourth cantons 2 third blue rectangles and 1 third orange rectangle in the middle. Another description gives pink instead of orange color.

Dragoon Guidons were not mentioned in the 'États Militaires' but, following the colours of the infantry flag, we have made this proposal:

This article is mostly a translation Jean-Louis Vial's article “Volontaires du Hainaut 1757-1763” published on his website Nec Pluribus Impar. The article also incorporates texts from the following books which are now in the public domain: