In 1744, when Karl Eugen von Württemberg acceded to dukedom, the Leibregiment was the only infantry regiment of the duchy of Württemberg. All other infantry regiments of the duchy originated from this initial regiment. Indeed, the same year, the Leibregiment was divided into two distinct units. The first battalion became the Garde zu Fuß (Foot Guard), the second the Infanterieregiment Prinz Louis.

In 1757, the Garde zu Fuß was once more reorganised into two distinct units. The original regiment became known as the "Leibinfanterieregiment von Werneck", retaining the 8 musketeer coys formed in two battalions, while a second unit designated as the 1. Grenadierbataillon was created from the 4 grenadier coys formed in a single battalion.

Throughout the Seven Years' War, the regimental inhaber was the Duke of Württemberg.

On August 10, 1757, the "Leibinfanterieregiment von Werneck" set off to join the Austrian army in Silesia. In October, it was at the siege of Schweidnitz. On November 18, three grenadier companies fromthe 1. Grenadierbataillon left Silesia and went back to Württemberg. They arrived at Stuttgart on December 26, to form the core of the new Garde zu Fuss. Meanwhile, on November 22, it took part in the Battle of Breslau where it was deployed in the first line of the infantry centre of Nádasdy's Corps. On December 5 at the Battle of Leuthen, the regiment was deployed in the first line of the Württemberger contingent under Marshal Spiznass at the extreme far left of the Austrian positions as part of Nádasdy's Corps. This position became the main target of the Prussian attack.

On August 1758, the regiment as part of the Württemberger Contingent made a junction with Soubise's Army at Kassel. On October 10, the regiment took part in the Battle of Lutterberg where it was placed in the centre of the first line. On November 30, it was at the action between Lauterbach and Fulda.

In 1760, the Württemberger Contingent operated under Austrian subsidies. Thus, the regiment joined the Austrian army in Silesia to fight against Prussia. From July 1760 to January 1761, two ad hoc grenadier battalions from the Garde zu Fuss campaigned in Saxony. In October 1760, they took part in the siege of Wittenberg. It was its last noticeable action during the war.

It seems the color of the buttons (yellow instead of white) and of the aiguillete (white instead of yellow) was changed after January 1,1758 (after von Werneck Regiment creation). 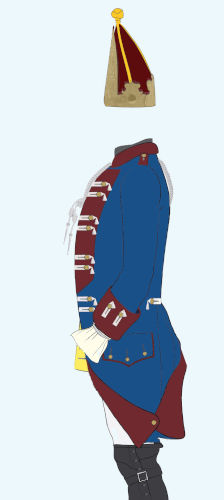 NCO's tricorne was probably laced silver. Furthermore, they wore beige gloves and carried a baton and a partisan.