The regiment originated from the guard of the Margrave of Brandenburg created in 1615.

By 1656, the regiment consisted of four battalions and took part in the Battle of Warsaw. It was later increased to five battalions.

In 1708, the regiment contributed two battalions to the creation of a new infantry regiment. It now consisted of only three battalions.

At the end of the War of the Spanish Succession in 1713, the regiment was reorganised as a regular field infantry unit and counted two battalions. From this date it garrisoned Berlin till 1793. It recruited in the districts of Storkow, Beeskow, Teltow and Zauche; and in the towns of Storkow, Buchholtz, Zossen and Beelitz.

During the War of the Austrian Succession, the regiment fought in the battles of Mollwitz (April 10, 1741) and Hohenfriedberg (June 4, 1745).

During the Seven Years' War, the regiment counted two battalions and was commanded by:

The numbering system (Stammliste) was first used by Leopold I, Fürst von Anhalt-Dessau (Der alte Dessauer) in the Dessauer Spezifikation from 1737. Around 1780, the numbers were used in the printed Stammlisten, still with some variations for the fusilier regiments. It became official by "Cabinets-Ordre" from October 1, 1806. The present infantry regiment was attributed number 1.

On August 26 1756, when the Prussian Army initiated the invasion of Saxony, the regiment was part of the centre column led by Frederick II. More precisely, it belonged to Margrave Karl's Corps. The centre column had concentrated in the area of Brietzen and advanced unopposed upstream along the Elbe River by Torgau and Wittenberg, leaving Meissen to its left. On September 6, it encamped at Rothschönberg and finally reached Wilsdruf. While the Prussian Main Army moved forward to engage the Austrian Army at Lobositz (October 1), the regiment remained in the Pirna Country to maintain the blockade of the Saxon Army which surrendered on October 17.

In the Spring of 1758, the regiment took part in the invasion of Moravia. In May, it guarded Frederick's headquarters at Schmirsitz.

Sash and sword knot. Small silver hat lace. White neck stock. No collar. Red lapels laced silver without braid loop. Two silver loops below the lapel. Red cuffs laced silver, two silver loops on the pockets as well as one sidewise on the waist and one on the back. Silber buttons. 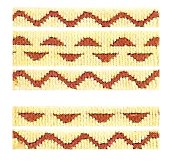 White and red drummer lace. Swallow nests with four vertical bars and one horizontal bars on each shoulder. Nine chevrons on each sleeve. Lace on the lapels, pockets, cuffs and on the front and back of the coat.

The pikes used as staffs for the colours were light brown with brass finials.