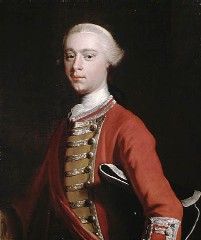 James Wolfe was the son of an army officer, Edward Wolfe, a veteran of Marlborough's campaigns, and of Henrietta Thompson.

About 1738, the family moved to Greenwich.

In 1741, James Wolfe accompanied his father, colonel in a Marines Regiment, in the unsuccessful expedition against Carthagena de Indias (actual Cartagena in Colombia).

In November 1741, Wolfe was appointed in his father's Marines Regiment (12th Durourel's).

In April 1742, at the beginning of the War of the Austrian Succession, Wolfe embarked for Flanders where he participated with the 12th Regiment in the Rhine Campaign.

On June 27 1743, at the Battle of Dettingen, Wolfe distinguished himself so much as acting adjutant that he was promoted lieutenant.

In 1744, Wolfe was promoted captain of a company in the 4th Barrel's Regiment of Foot. In October, his brother Edward died from consumption after having joined the army.

In 1745, a detachment of the 4th Regiment of Foot was sent to Scotland to deal with the Highland rebellion led by Charles Edward Stuart. Wolfe was employed as a brigade-major.

On January 17 1746, Wolfe was present at Hawley's defeat at Falkirk. On April 16, he took part in Cumberland's victory at Culloden where he acted as aide-de-camp to General Hawley. After this battle, Wolfe spent some time in Scotland with his regiment, laying waste the country.

Once the Highland rebellion crushed, Wolfe returned to Flanders where he served under the Duke of Cumberland with his old unit, the 12th Regiment of Foot.

On July 2 1747, Wolfe took part in the Battle of Lauffeld where he was wounded. His valor won him the commendation of the duke.

In 1748, after the war, Wolfe returned to Great Britain and was sent to Scotland with his unit for garrison duty.

In 1749, Wolfe was promoted major of the 20th Regiment of Foot stationed at Stirling.

On March 20 1750, Wolfe was promoted lieutenant-colonel of the 20th Regiment of Foot with which he served in Scotland and later in England until 1758.

In September 1757, at the beginning of the Seven Years' War, Wolfe served as a staff officer in the unsuccessful Rochefort expedition but his prospects were not affected by the failure. Indeed, he was brought to the attention of William Pitt, the Secretary of State.

On January 23 1758, Wolfe was appointed brigadier-general for the planned expedition against Louisbourg under Amherst and Boscawen. Soon afterward, he was sent to North America. The landing near Louisbourg was effected in the face of strenuous opposition, Wolfe leading the foremost troops. During the siege Wolfe had charge of a most important section of the attack and the fiercest fighting took place on his lines. On July 27, Louisbourg surrendered after an obstinate defence. Soon afterwards, he returned to Great Britain to recruit his shattered health but on learning that Pitt desired him to continue in America he at once offered to return.

In 1759, Wolfe was appointed commander-in-chief of the expedition against Québec by William Pitt, with the rank of major-general. In a brief holiday before his departure, he met at Bath Miss Lowther to whom he became engaged. Very shortly afterwards he sailed, and at the beginning of June, the Québec expedition sailed from Louisbourg. At the end of June, he landed near Québec with his expeditionary force.

On September 13, after wearisome and disheartening failures, embittered by the pain of an internal disease, Wolfe crowned his work by the decisive victory on the Plains of Abraham. Wounded earlier in the fight, he refused to leave the field, and a second bullet passing through his lungs inflicted a mortal injury. While he was lying in a swoon someone near him exclaimed, "They run; see how they run!" "Who run?" asked Wolfe as one roused from sleep. "The enemy," was the answer "they give way everywhere." Wolfe rallied for a moment, gave a last order for cutting off the retreat and murmuring, "Now God be praised, I will die in peace" breathed his last. The city of Québec capitulated five days later.

This article incorporates texts from the Encyclopædia Britannica, 11th ed. London: Cambridge University Press, 1911. A publication which is now in the public domain.