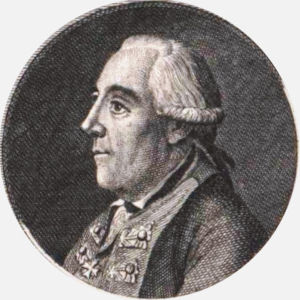 Johann Jakob von Wunsch was born on December 22, 1717, in Heidenheim/Benz, in the Duchy of Württemberg. He came from a bourgeois family.

In 1733, Wunsch joined, as cadet, a Württemberger regiment in the Imperial service.

In 1739, after the Treaty of Belgrade, Wunsch entered in the Bavarian service as Oberleutnant in the Frangipani Hussars.

In 1748, after the Treaty of Aix-la-Chapelle, Wunsch resigned from the Bavarian service.

As Prussia began to raise free battalions, in the winter of 1756-57, Wunsch joined the Freibataillon de Angelelli as captain. On December 4, 1756, he was promoted to major, making several improvements to the organisation of the unit and drawing the attention of Prince Heinrich.

On January 31, 1758, Wunsch received the authorisation to raise his own free battalion (Freibataillon von Wunsch).

On June 22, 1759, the former Freibataillon Monjou was incorporated in Wunsch’s unit which became Frei-Infanterie von Wunsch. On 11 July, King Frederick II promoted Wunsch to colonel in recognition of his outstanding service during the campaigns of 1758 and 1759. On August 9, 1759, he was also appointed major-general. On August 12, after the disastrous defeat of Kunersdorf, Wunsch’s Corps was one of the last operational Prussian force in Brandenburg. It was charged to cover the retreat of the main army and to protect Berlin from the Austrians. Wunsch was then placed at the head of a small corps and charged to advance into Saxony, to recapture Wittenberg and Torgau, which had recently surrendered to the Austro-Imperials and to relieve Dresden. On August 28, he reoccupied Wittenberg. On August 31, he recaptured Torgau. However, he arrived too late to relieve Dresden, which had capitulated on the previous day. On September 8, he defeated a small Austro-Imperial corps in the Combat of Zinna, near Torgau. On September 13, he drove the French out of Leipzig. On October 29, Wunsch won an engagement near Pretzsch (he would receive the Pour le Mérite order for his conduct in this combat). On December 20, after trying to break through the surrounding forces, Wunsch was forced to surrender at the Battle of Maxen. He was then imprisoned until the end of the war.

On May 29, 1763, Wunsch was appointed chef of the former Finck Infantry, which was stationed in Prenzlau.

On May 22, 1787, Wunsch was promoted to general of infantry and received as Knight of the Order of the Black Eagle shortly afterwards.

Johann Jakob von Wunsch died in Prenzlau on October 18, 1788, without progeny. His only son had been killed in a combat near Peterswald on April 15, 1759.