The tercio was raised on April 30 1580 in Eastern Castile, mostly in Zamora, and placed under the command of don Francisco de Bobadilla. It initially counted some 3,000 men in 12 companies. In 1582 and 1583, the tercio took part to the conquest of the Azores islands before returning to Cádiz on September 1583.

In 1585, the tercio sailed from Cádiz to escort the duke of Savoy to Nice. It then disembark at Velletri near Rome and marched through Savoy to reach the Low Countries. Accordingly, the tercio was renamed Tercio departamental de Holanda. It took part to the siege of Antwerp and then garrisoned the island of Bommel between the Meuse and the Waal rivers. At the beginning of September, the Dutch broke the dykes, flooding the area but bad weather saved the isolated garrison. The tercio served in the Low Countries until 1593. From 1594 to 1597, it took part to the operations in the French province of Picardie under count Mansfeld. In 1598, the tercio was transferred to the Rhine. In 1599, it was forced to retire to the island of Bommel where it drove back a Dutch attack.

In 1614, the tercio was part of the Spanish army who invaded the county of Jülich. It then returned to the Low Countries and took its quarters in Antwerp.

In 1621, when war broke out with the Dutch once more, the tercio joined the Spanish army who invaded the county of Jülich. In 1622, after the submission of Jülich, the tercio returned to Flanders to take its winter quarters. It then took part to the expedition against Bergen op Zoom but was forced to return to Brabant to contain an invasion. In 1624 and 1625, it took part to the siege of Breda. From 1626 to 1632, it served in Brabant. In 1629, the tercio crossed the Issel and besieged Bois-le-Duc which was soon relieved. In 1632, it occupied Namur which it evacuated in 1633. In 1634, it advanced against Maastricht. In 1635, it retired on the lines of Louvain and took its quarters around Liège. In 1638, the tercio operated in Artois. In 1639, it took part to the combat of Saint-Nicolas. In 1640, 5 companies of the tercio were ambushed near Hulst. In 1641, it was at the siege of Arras. In 1642, the tercio received fresh troops from Spain and took part to the siege of lens, captured on April 19. On May 19 1643, the tercio took part to the battle of Rocroi where it suffered heavy losses. In 1644, it vainly tried to relief Gravelines and Ghent. From 1645 to 1648, the tercio fought the French in the Low Countries.

In 1667, the tercio was part of the Spanish army who defended the Low Countries against a French invasion.

In 1672, when Spain formed an alliance qith the Netherlands against France, the tercio joined the Dutch army at Masstricht. In 1673, it took part to the capture of Naarden on September 14. On August 11 1674, it fought at the inconclusive battle of Seneffe and then unsuccessfully besieged Oudenarde before retiring to Bruges and Bruxelles. In 1676, it took part to the reconquest of Bouchain.On June 11 1677, it fought at the battle of Mont Cassel. In 1678, the tercio defended Ypres and, on March 25, surrendered with the honour of war.

In 1689, when Spain joined the League of Augsburg, the tercio joined the army assembling in Flanders. On July 1 1690, it fought at the battle of Fleurus, retiring to Bruxelles after the defeat. In 1691, it retired in the fortified city of Mons which was immediately encircled and besieged by the French army. The tercio capitulated on April 10 under the condition that it would not take part to the operation for a full year.On July 29 1693, it fought at the battle of Neerwinden. In 1694, it joined the Dutch army who attacked Huy. In 1695, the tercio took part to the siege and capture of Namur (August 4).

At the beginning of the War of the Spanish Succession, in 1702, the tercio joined the French army and took part to the siege of Kikuigt. In 1703, it was among the troops of the Franco-Spanish army at the camp of Eckeren. On June 30, it took part to a combat near Antwerp before retiring on the lines of Brabant. On May 24 1706, it fought at the battle of Ramillies and then marched to Ostend where it capitulated on July 6. In 1710, the regiment was transferred to Spain. Its first battalion went to Catalonia and its second to Old Castile. In 1713, the two battalions were reunited in Castile before marching to Alcántara and the regiment was stationed in the province of Extremadura where it remained until the end of September 1716. For a brief period, the tercio was named “Valois” but on April 20 1715, it was transformed into a regiment and became known as the Regimiento de Zamora.

In 1718, the regiment took part to the repression of a rebellion in the province of Guipuzcoa. In 1719, it repulsed a French force sent towards Irun. In April, the first battalion of the regiment was then thrown into San Sebastian and the second into Fuenterrabia. The French then besieged Fuenterrabia from April 27 to June 17 when the second battalion of Zamora left the place with honour of war and marched to Pamplona. On July 11, the French opened the siege of San Sebastian where the first battalion capitualed.

In 1731, the regiment was transferred to the province of Valencia.

At the beginning of the War of the Polish Succession, in 1734, the regiment sailed for Italia where it garrisoned Pescara. In 1735, it joined the main Spanish army in Tuscany. It formed part of the vanguard who advanced towards Bologna. The regiment then encamped at Substinenti (???). In 1736, it retired to Livorno where it re-embarked for Spain. On June 28, it was at barcelona.

In 1751, the regiment assumed garrison duty at Oran. In 1754, it was transferred to Barcelona.

During the Seven Years' War, the regiment ranked 8th and was under the command of:

In 1762, the regiment marched across Spain towards the Portuguese border where a Spanish army was assembling under the command of the marquis de Sarria. The 2 battalions took quarters in the villages of San Felix el Grande and San Felix el Chico near Ciudad Rodrigo. The regiment was part of the brigade of count de Maceda. It took part to the siege and capture of Almeida (August 25). The regiment was then transferred to the brigade of Ribaguero who advanced on Salvatierra and forced this place to capitulate on September 9 and the fortified town of Segura shortly after. Under the command of general O'Reilly, the regiment reconnoitred the enemy positions of the Talladas. Then the operation were terminated. 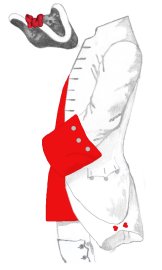 The coronela (colonel flag) of the regiment was white with a red Burgundian cross terminated in each corner by a medallion carrying the arms of the regiment (left half: red field with an armoured arm carrying a lance with a pennon, right half: a fortified bridge over a river) surmounted by a golden crown. In the middle: the arms of Charles III surrounded by the necklace of the order of the Toison de Oro (Golden Fleece).

The batallonas (ordonnance flags) of the regiment were white with a red Burgundian cross terminated in each corner by a medallion carrying the arms of the regiment(left half: red field with an armoured arm carrying a lance with a pennon, right half: a fortified bridge over a river) surmounted by a golden crown.