From Project Athinai
Jump to navigationJump to search 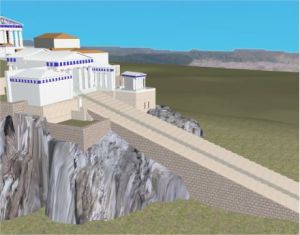 Initially, the access to the Akropolis was made through a narrow zig-zag road. Around 566 BC, when the Greater Panathenaia Festival was established, a large ramp made of packed earth and polygonal masonry replaced this old access road. It measured some 80 m long by 10 m wide and rose 25 m. During the contruction of the Propylaea (between 437 and 432 BC), the ramp was widened to 21 m and covered with poros blocks of isodomic masonry in oblique courses. The steps were probably grooved to improve traction.

Work on the access ramp appears to have been interrupted at the same time as the construction of the Propylaea in 432 BC. It was completed only after the Classical period.

A bronze group (man and horse), dedicated around 450 BC by the hippeis to commemorate their first victory, stood along the east side of the stairway giving access to the sanctuary of Athena Nike. The group was made by Lykios son of Myron.

The marble stairway was added only in 52 AD, during the Roman Period.