Since the end of September 1702, during the campaign on the Rhine, a French army was posted on the left bank of the Rhine at Huningue while an Imperialist corps was posted on the opposite bank at Friedlingen, blocking the advance of the French who planned to make a junction with the army of the Elector of Bavaria.

The French managed to establish a bridgehead on the right bank in front of the camp of the Imperialist army but the latter had been reinforced and Villars, the French commander, estimated that he was not strong enough to attack the Imperialists well defended positions.

On 13 October, a French detachment passed the Rhine and made itself master of Neuenburg, some 28 km downstream from Friedlingen. It immediately started to work on a bridge. 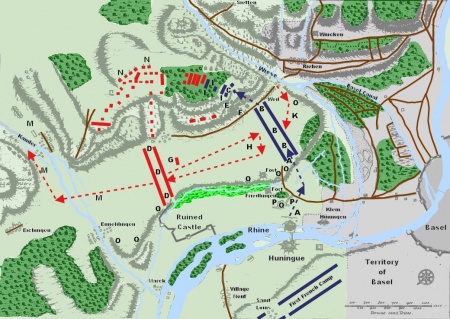 Tentative reconstruction of the map of the Battle of Friedlingen.

The small village and the Castle of Friedlingen are located opposite Huningue, to the north of Basel at the end of a bend formed by the Rhine. The French had previously established a bridgehead on that side of the Rhine. For their part, the Imperialists had built a line of entrenchments between the Wiese River and the Kanderbach.

The terrain rose towards the east between Friedlingen, Haltingen and Weil, forming a hill to the east of these villages. The slopes of that hill were covered with vines and an oak forest occupied its broad ridge.

On 14 October in the morning, Villars was informed that the Imperialist army was abandoning its entrenchments at Friedlingen to march on Neuenburg. Immediately, Villars sent MM. Desbordes and de Chamarande with infantry brigades and 1,200 horse across the Rhine via the island of Schusterinsel near Weil am Rhein, to occupy the entrenchments abandoned by the enemy.

Meanwhile, the Imperialist army had already reached the Kanderbach River and had started to cross it.

At 8:00 a.m. of this sunny day, Colonel Count Mercy brought to FZM Count Fürstenberg the news that the French army was debouching on the right bank of the Rhine. Meanwhile, the Margrave of Baden had rejoined troops at Eimeldingen. When he heard of Mercy's report, he immediately sent the cavalry of his left wing to Fürstenberg's help. This cavalry marched in the direction of Haltingen and then formed Fürstenberg's right wing while the cavalry initially posted there was transferred to the left wing. The margrave then rapidly retraced his steps with his infantry to attack Villars' forces, marching in the direction of Ötlingen.

The French infantry (Champagne, Bourbonnais, Poitou and La Reine brigades) marched rapidly to reach the crest of the Tüllingen Heights.

Around 10:00 a.m., the margrave deployed his army in two lines. Furthermore, 3 bns were posted on the slopes overlooking the plain and a few bns (including the Land-militia of Prince Baden-Durlach) were thrown into the Forest of Käfernhölz. The Imperialist cavalry was deployed in order of battle on the plain facing the French cavalry. The Imperialist cavalry counted 2,000 more horse than the French cavalry (34 sqns) which was deployed with its left near the Fort of Friedlingen, despite a lively artillery fire coming from this fort, with its right anchored on the Heights of Tüllingen that the French infantry was marching to occupy.

Around 11:00 a.m., the Imperialist infantry penetrated into the forest of Käfernhölz to the east of Haltingen. These troops were led by General Count Carl von Fürstenberg-Möskirch, Prosper von Fürstenberg-Stühlingen, the General Hereditary Prince of Baden-Durlach and the Margrave of Anspach.

Meanwhile, the advance of the French infantry on the Tüllingen Heights was hindered by vineyards and steep slopes. Nonetheless, the French infantry charged the Imperialist positions in the Forest of Käfernhölz three times and finally managed to drive them back, capturing their guns.

However, Imperialist foot retiring from the Forest of Käfernhölz were soon supported by the Bayreuth Dragoons and isolated groups of French foot were forced to retire precipitously, spreading panic in the French infantry line. Villars had to intervene personally to rally his infantry.

The Margrave of Baden then ordered his cavalry right wing to attack the French cavalry to protect the retiring infantry. Meanwhile, some cavalry of his left wing, under the command of FML Count Arco, advanced through the vineyards between Haltingen and the oak wood. Furthermore, FML Erffa also advanced with a few bns along with the dismounted Bayreuth Dragoons.

M. de Magnac, commanding the French cavalry, saw the Imperialist cavalry personally led by the Prince Hohenzollern set off to charge him. He let the Imperialist cavalry cover three quarters of the distance separating them, thus masking the artillery of the Fort of Friedlingen, and then counter-charged without firing a single shot. The shock was rude but the French cavalry broke its opponents and pursued them up to a defile in the direction of the Kanderbach, without letting itself get distracted by plunder or by the capture of prisoners. Most Imperialist cavalry officers were killed or wounded during this cavalry combat and their cavalry was left without leader.

After its initial success, the French infantry abandoned the cover of the woods and came out on the plain and lost time reorganising, thus allowing the Imperialist infantry to escape.

Meanwhile, the Margrave von Baden had given orders to retreat towards Staufen. To mask this movement, he ordered an attack with the infantry which was now without ammunition, The infantry, led by Count Prosper Fürstenberg, advanced at the point of the bayonet against the Forest of Käfernhölz. At that moment, FML Erffa arrived with a few bns and attacked the flank of the French supported by FML Hohenzollern with some cavalry.

Unchecked by the devastating fire coming from the edge of the forest, the Germans resumed their advance and recaptured the two previously lost guns and captured six French pieces. They also engaged in hand to hand combat with the superior French force. The French defending that forest retired to Weil.

Among the Imperialist cavalry, the Hohenzollern Cuirassiers, the Castel Dragoons and the Schad Dragoons had rallied. The Prince of Hohenzollern, General Aufsess and the wounded Stauffenberg rejoined the margrave who had assembled a few hundred horse from the fleeing cavalry.

Fortunately for the retiring Imperialists, the French cavalry had stopped at the defile.

For five hours the Margrave of Baden observed the French cavalry before retiring with his cavalry in the direction of Staufen. However, his infantry was still pinned down around Weil and had to wait till the evening to retire.

The Imperialists lost General Stauffenberg, Colonel Kakeren, the Count of Zollern and the Baron d'Aue, killed in action; the Count of Fürstenberg, the Prince of Anspach and the Prince of Hohenzollern, later died of their wounds; the Hereditary Prince of Durlach, wounded; and 3,000 men dead, wounded or taken prisoners (according to French sources) or 2,874 men (according to the Vienna War Archives) or, according to Treuenfest, 314 foot killed, 717 foot wounded, 21 horse killed and 25 horse wounded in addition to 400 men missing or taken prisoners.

The Imperialist army abandoned all its ammunition carts and a large quantity of grain and flour destined to their magazines.

Among the French troops involved in this battle, the following units are specifically mentioned.

N.B.: Poitou Brigade is specifically mentioned in reports on this battle. It was not part of Villars' original force and probably formed part of the reinforcements which he had recently received.

N.B.: La Reine Cavalerie Brigade and Gévaudan Cavalerie Brigade, totalling 6 sqns, had been detached to Neuburg on the previous day and are not counted in the present order of battle. Similarly, the reinforcements recently arrived from Illkirch (10 bns, 20 sqns) under M. de Guiscard were still at Neuburg and did not take part in the battle.

Swabian Baden Durlach militia occupied the entrenchments and the Castle of Friedlingen.

Other Imperialist units are specifically mentioned but we have not been able to find their exact positions in the order of battle. These units are: