Since 9 June 1703, the main army of the Allies and the Franco-Spanish army of Boufflers and Villeroy were idly facing each other. Meanwhile, several Allied corps received orders to make diversions on Ostend (Coehoorn's Corps), to the south-west of Antwerp (Spaar's Corps) and on Antwerp (Obdam's Corps). These corps were constantly being reinforced. When Coehoorn heard of Marlborough's idea of attacking Huy, he abandoned his design against Ostend and decided to march on Antwerp to levy contributions.

In the morning of 26 June, Spaar advanced on Steckene while Coehoorn embarked and sailed on the Scheldt to Calishoek.

On the night of 26 June, Marlborough suddenly broke up his camp at Hanneffe, crossed the Jaar and encamped with his right at Op-Heers and his left on the Jaar near Louesche. The same day, Villeroy and Boufflers marched from Saint-Gervais to Landen with their right at Crasavernas and their left at Welen.

On 27 June at 3:00 a.m., the Allies launched attacks on Calishoek and Steckene. Coehoorn (approx. 2,000 men) easily dislodged the 150 men defending Calishoek. Spaar (12 bns, 8 sqns, 20 guns and 12 mortars) breached the defences at Steckene in less than four hours and finally forced Hessy to abandon this position and retire on Lokeren, Fort Saint-Jean and Swyndrecht. Spaar then encamped near Steckene which he plundered, seized the magazines and put the Waasland to contributions. Lamothe was on the march to support Hessy when he was informed that Steckene had fallen. He then returned to Ghent with Hessy. The same day, Obdam decamped from Stabroek and marched to Ekeren, only 5 km from Bedmar's camp at Merksem. Obdam then encamped with his right at Ekeren and his left at Brasschaat.

On 28 June at 2:00 a.m., Marlborough extended his positions towards Borchloon. At 10:00 a.m., when Villeroy and Boufflers were informed of this movement, they passed the Kleine Gete and hastened with all speed for Diest in order to be there before Marlborough. Their vanguard arrived early at Diest and their rearguard joined at 10:00 p.m.

In the morning of 29 June, the French marshals received letters from Bedmar requesting reinforcements to attack Obdam at Ekeren. Another letter from Guiscard asked their authorisation to attack Spaar in Waasland. At 8:00 a.m., the marshals sent 30 grenadier coys (a total of 1,500 grenadiers), 15 horse sqns and 15 dragoon sqns to Bedmar by Aarschott. Boufflers personally took command of these reinforcements. At 10:00 p.m., Boufflers arrived at Bedmar's camp with his troops. 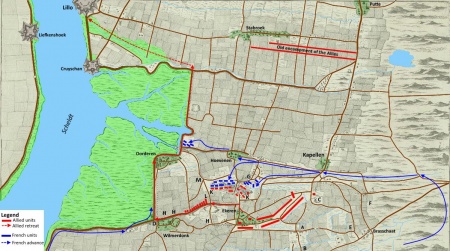 Tentative reconstruction of the map of the battle of Ekeren.

Obdam was encamped with his right at Ekeren and his left at Brasschaat, in a very advantageous position criss-crossed by marshes, hedges, canals, dykes and watergangen. His right and his front were covered by a stream. He considered his position as unassailable.

They made a large detour to turn the stream covering Obdam's positions and to fall on his left wing.

Around noon, the Allied generals reconnoitred the neighbourhood in front of their positions and were fired upon by a small party who had prepared an ambush. At about the same time, an Allied cavalry patrol first detected advancing Franco-Spanish troops near Brasschaat. They informed Obdam who immediately ordered his army to take arms and fired three cannon-shots which was the signal to stand ready to march.

Boufflers and Bedmar then sent the rest of Notaff Dragoons, Du Roi Dragons, Richebourg Dragoons along with Chasonville Cavalry, Mestre de Camp Général Dragons, Heyder Cavalry, Arco Cavalry, Cano Cavalry, Obelstein Cavalry and Bedmar's Gardes to attack the enemy. The Franco-Spanish cavalry, through several charges, drove the Allies back on the dyke between the villages of Hoevenen and Oorderen; and on the village of Ekeren. The Franco-Spanish cavalry was then stopped by the many obstacles covering the positions of the Allies.

The Allies, realising that the Franco-Spanish infantry had not yet reached the battlefield, advanced 18 or 20 bns against the enemy cavalry, gradually pushing it back.

Around 4:00 p.m., Obdam detached the piquets guarding the artillery as well as Slangenburg Infantry and Fagel Infantry to try to dislodge Guiscard's and Guiche's dragoons from the dyke of Oorderen which joined the dyke of Ekeren and constituted the only passage allowing them to retire on Lillo.

Guiscard and Guiche held their ground but had to evacuate Oorderen. Fire broke out in one of the finest houses of the village.

Meanwhile, Boufflers and Bedmar sent message to their infantry and artillery to hasten pace.

Around 4:30 p.m., the head of the Franco-Spanish infantry appeared on the battlefield. These troops were marching almost continuously since ten hours; while the converged grenadiers were on the march from Diest since 34 hours...

Immediately, Boufflers and Bedmar sent 6 bns to reinforce Guiscard and Guiche at Oorderen. They then directed the remaining 22 bns towards Ekeren to prepare for an attack on the strong positions of the Allies in these quarters, well protected by hedges and ditches full of water. The only accesses being watergangen. It took 1½ hour to deploy the infantry in order of battle, in two lines (a first line of 14 bns, a second of 8 bns). The Marquis de Thoy commanded the right of the infantry; the Prince d'Epinois, the centre; the Comte de Montgeorges, the converged grenadiers; and M. de Labadie, the left. Finally, 10 guns had been placed in front and on the left of the 22 bns of Franco-Spanish infantry.

The Franco-Spanish artillery then opened on Ekeren, the Allies answering timidly with 6 light pieces.

The Franco-Spanish infantry then attacked the village of Ekeren, driving back 3 Allied bns who suffered heavy losses. The Allies had abandoned some 300 carts at Ekeren and behind the dyke leading to Lillo. The Franco-Spanish foot started to plunder these carts thus causing delays and disorder.

However, order was soon re-established in the Franco-Spanish ranks and a long struggle began which lasted till nightfall.

At about that time, General Obdam, escorted by 30 horse disguising themselves as Frenchmen, fled the battlefield.

During this attack on Ekeren, Guiscard and Guiche had attacked the village of Oorderen as soon as they had received the 6 bns sent to them as reinforcements.

Around 6:00 p.m., Guiscard and Guiche finally made themselves master of Oorderen, capturing 4 guns. They then turned these guns against the Allies who repeatedly tried to reconquer the village and thus open a line of retreat towards Lillo. They were soon reinforced by Capres Infanterie (2 bns). There too nightfall put an end to combats.

Around 6:30 p.m., the Allies posted two Holsteiner dragoon regiments to guard the dyke to the west of Ekeren.

At 7:00 p.m., General Slangenburg ordered to retreat from Ekeren towards Oorderen.

At 7:30 p.m., Franco-Spanish troops advanced from Oorderen to stop the retreat of the Allies but the battery at Wilmarsdonk forced them to retire.

At 8:30 p.m., the Allied cavalry drove the enemy back to the highway between Ekeren and Hoevenen, capturing a pair of kettle-drums, 2 colours, 1 standard and 1 dragoon guidon.

From 9:00 p.m., Slangenburg decided to make another attempt against Oorderen.

Around 10:30 p.m., the Allies finally made themselves master of Oorderen.

At 11:00 p.m., the Franco-Spanish infantry retired closer to its cavalry posted on a nearby heath.

The Allies retired to Lillo during the night. Obdam had already fled to Breda.

The Franco-Spanish army remained master of the battlefield and captured 6 guns, 2 mortars, all ammunition, 6 colours, 2 standards, more than 300 artillery carts and 800 prisoners.

Boufflers estimated the losses of the Allies to approx. 3,500 men, excluding the 800 prisoners that he had taken.

Obdam's shameful behaviour in this battle destroyed his military career.

N.B.: this is the order of battle of Obdam's Corps on 24 June; the same day, he sent Coehoorn in the direction of 's Gravenwezel with a strong detachment

N.B.: unless specifically mentioned, units listed in this order of battle belong to the French Army