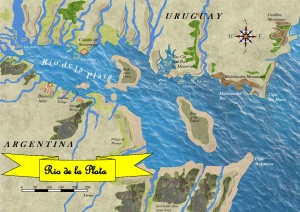 Map of the region of the estuary of the Rio de la PLata – Courtesy: Dinos Antoniadis

The post of Colónia do Sacramento (present-day Colonia del Sacramento in Uruguay) had been established by the Portuguese in 1680 on the San Gabriel island to fix the southern border of Brazil. The Spaniards immediately reacted by besieging and capturing the settlement. However, it was ceded back to Portugal by treaty in 1681. The settlement was rebuilt in 1683. The Portuguese gradually transformed the settlement into a stronghold capable of resisting to a siege.

In 1699, Sebastião da Veiga Cabral became governor of the establishment.

By 1703, the Spaniards permanently maintained a force of 50 horse on the coast of the San Juan River near Colónia do Sacramento.

In 1704, the Spanish governor of Buenos Aires, Valdes Incian, received orders to capture Colónia do Sacramento. 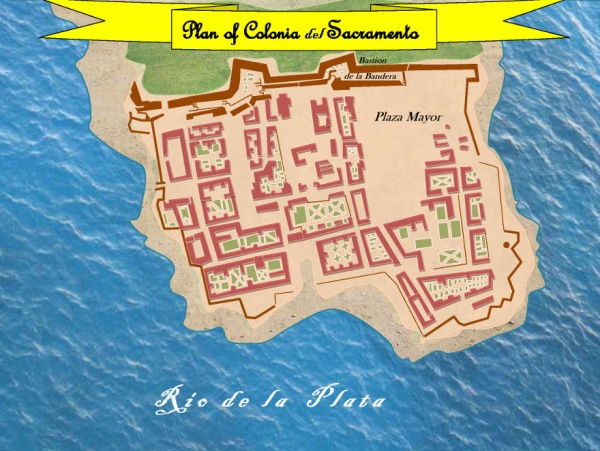 Depiction of the settlement circa 1740

Governor Valdes Incian requested armed contingents from Santa Fe and Corrientes. These forces (some 650 men) assembled at Buenos Aires and placed under the command of Sergeant-Major Baltazar García Ros.

At the end of July, Captain Andrés Gómez de la Quintana was sent to Santo Domingo Soriano to make preparation for the campaign against Colónia do Sacramento.

Ros’s forces then crossed the Uruguay River and effected a junction at Santo Domingo Soriano with a force of 4,000 Guarani Indians coming from the missions led by their caciques and missionaries.

Ros’s little army (650 Spaniards, some 1,300 Metis and 4,000 Guarani Indians) then marched towards Colónia do Sacramento.

On 18 October, Ros’s little army appeared in front of Colónia do Sacramento.

Governor Veiga Cabral had had enough time to prepare for the arrival of the Spanish army. He had improved the fortifications of the place and received reinforcements and provisions from Brazil. He was now at the head of a garrison of 700 men.

Furthermore, a small Spanish flotilla under Captain José de Ibarra y Lazcano cooperated to the blockade, making it impossible to resupply the place from the sea.

Despite his numerical inferiority, Governor Veiga Cabral was still resolved to defend Colónia do Sacramento. On the Spanish side, opinions differed as to the best approach to conquer the place, some advocated for an assault while others proposed to continue a formal siege, arguing that the defences of the place were still in good condition and that the garrison would soon run out of provisions and would be unable to renew them because of the naval blockade.

Early in February 1705, the Spaniards launched a frontal assault which was driven back.

Governor Valdes Incian arrived from Buenos Aires and held a council of war where it was determined that a general assault would be too costly and that García Ros would resume the formal siege.

In Brazil, the Portuguese authorities feared for the fate of Colónia do Sacramento if it was left with its own means. The place had no line of communication with Brazil. However, a week of travel would be necessary to resupply the place with ammunition and provisions and only a victorious naval combat would allow the relief force to enter into the port. The governor general of Brazil, Don Rodrigo da Costa, and that of Rio de Janeiro, Don Alvaro de Sequeira, decided, according to their military advisers, to send a naval force capable of forcing the Spanish blockade of Colónia do Sacramento and evacuate the population and the troops.

The Portuguese naval force consisted of four ships departed from Brazil under the command of Captain Amaro José de Mendonga.

In mid-March 1705, the Portuguese flotilla engaged the Spanish ships blockading Colónia do Sacramento. The inferior Spanish were soon forced to retire and the Portuguese ships entered into the harbour.

On 14 March, the Portuguese ships evacuated the colonists and the garrison of Colónia do Sacramento. Before leaving, Veiga Cabral ordered the burn down some buildings and abandoned part of the artillery due to the impossibility of transporting it.

The Spaniards and the Guaranis entered into Colónia do Sacramento and completed the destruction of the place, sparing only the churches and the bridge.

On 23 April, the Portuguese ships arrived at Rio de Janeiro with the evacuees.

In 1713, the settlement was restored to Portugal by the Treaty of Utrecht, but it is only in 1718 that Portuguese settlers reoccupied the colony.