After the capitulation of Ostend (6 July 1706), the Duke of Marlborough marched to Courtrai (Kortrijk), intending to capture Menin (Menen), a first class French fortress recently constructed.

Menin had a garrison of 6,000 men commanded by the Comte de Caraman. 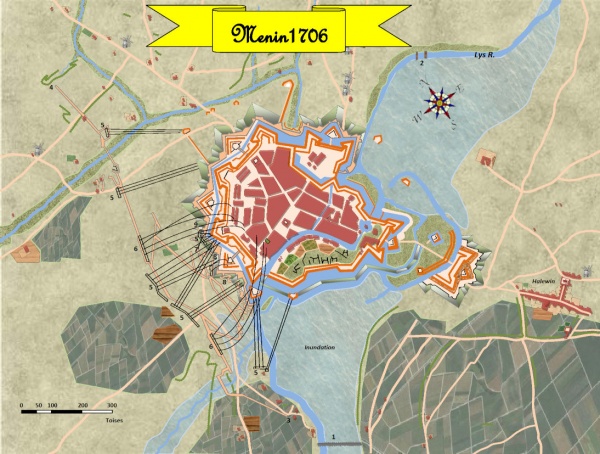 Map of the siege of Menin in 1706 – Copyright: Dinos Antoniadis
Key to the map:
1 Great communication bridge
2 Communication bridges
3 Opening of the Right Attack
4 Opening of the Left Attack
5 Cannon Batteries
6 Mortar Batteries
7 Small Hand Mortars
8 The two locations where Allied miners worked to blow up the ravelin
9 The location where the mine of the defenders exploded

The position of the Fortress of Menin near the French border led to many sieges in the history of the city. There were as many as 22 sieges between 1579 and 1830.

On 4 August 1706, the Allies started digging the trenches in front of Menin.

By August, the Allied lines were complete and approach trenches were begun.

By 9 August, 72 cannon and 24 mortars were in action and other guns were on their way.

On 15 August, the covered way was stormed.

On 18 August, the Allies installed themselves on the glacis and controlled of the covered way.

By 21 August, a large breach was formed.

In the morning of 22 August, the Allies started a fierce bombardment. Before it became necessary to storm the breach, the governor surrendered on terms.

The garrison was allowed to march out of Menin with full honors and was escorted to Douai.

By the time the Allies had made themselves masters of Menin, the French had an army in the field again.

On 27 August, the Allies began the siege of Dendermonde. It was led by Marlborough's brother. The place surrendered at the beginning of September and its garrison became prisoners of war.

In 1715, the “Treaty of the Barrier” granted the Dutch Republic the right to have a garrison in Menin, as well as in five other places in Flanders, to constitute a "barrier" against a possible French aggression. Menin remained a barrier-place for the Dutch Republic against France from 1715 to 1781.

Dinos Antoniadis for the initial version of this article.