The siege lasted from July to September 1707

In the summer of 1707, Imperial troops under the command of FZM Wirich Count Daun undertook the conquest of the Kingdom of Naples. Capua and Naples soon surrendered and Pescara capitulated after a short siege. The Fortress of Gaeta now constituted the sole stronghold of the Bourbons in the kingdom.

In July, soon after the occupation of Naples, Daun wanted to make himself master of Gaeta. However, the great heat made the immediate start of such a difficult operation look all the more daunting, since various preparations had to be made to carry it out. Daun decided to first repair the necessary artillery, gather ammunition and provisions.

On 14 July, since Daun did not expect success from a unilateral land attack, he sent a request to Vienna requesting the assistance of some Anglo-Dutch ships. Meanwhile, he assembled a small flotilla, which contained only a few small imperial vessels, while the rest was made up of 13 tartanes.

In mid-July, to cut off the enemy garrison at least from the land side, Daun sent Lieutenant-Colonel von Seydlitz to Mola with 300 dragoons.

The Fortress of Gaeta was located on the Gulf of Gaeta, in the Neapolitan Province of Caserta, 10 km east of Terracina. It stood on a plateau-like mountain projecting southwards far into the sea, the last foothills of which in the north, west and south fall as steep cliffs into the sea or towards the mainland, with which it is only connected by an isthmus about ½ km wide. This narrow stretch of land constituted the only vulnerable section of the fortress, which extended up to the top of the mountain crowned with a castle. Near the coast at the eastern end of this isthmus, stood a gate linking the place with the suburbs of San Carlo on the mainland. This is also where the fortifications began, they were laid one behind the other in tiered steps across the isthmus and reached from the citadel at Porta della Terra in the east to the Church della Trinita, next to the port of Calderno, in the west.

The Sant Andrea Bastion, built on sheer rock, formed the centre of the fortifications, and between this and the citadel there was another broad and deep ditch closed by a covert way with glacis. While the only access to the city by the land was through this ditch and the citadel, walls completed the left from the Sant Andrea Bastion to the Church of Santa Trinità. These walls were broken in flanking lines and, since they were built on cliffs rising vertically from the sea, they were covered against any approach.

Inside the place of Gaeta, at its highest point, there were two strongholds: the Torre d'Orlando and the Castell, which could both sustain individual sieges.

However, two small heights: the Monte della Trinità, about 750 m in front of the attacking front, and the Monte Secco located a little southwest of the first height closer to the ramparts, posed a threat to these strong defensive works. Their southern slopes reached the glacis, favouring the preparations for an attack through numerous gardens, country houses and other buildings surrounded with stone walls. 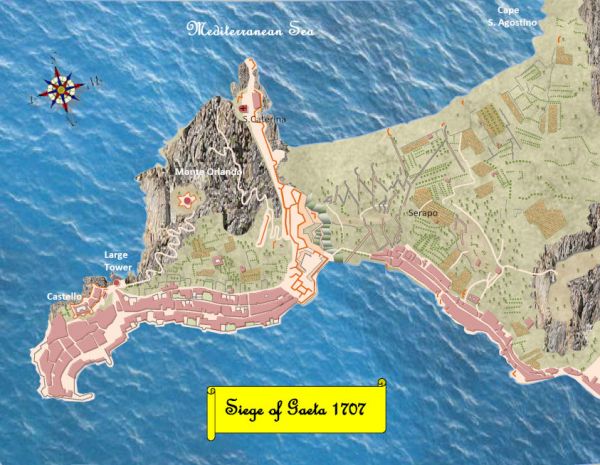 Map of the siege of Gaeta in 1707 – Courtesy: Dinos Antoniadis

The garrison of the Fortress of Gaeta consisted of 1 Walloon bn, 5 Spanish infantry rgts, 4 Italian coys and 150 dragoons for a total of approx. 3,000 men under the command of Maréchal de camp José Cara. The artillery was under the command of General Orazio Copula. The former Viceroy Duke of Ascalona, the General Duke of Bisaccia, and several other supporters of the Bourbons had taken refuge in the fortress. The place was well supplied with guns and ammunition while the galley flotilla of the Duke of Tursis anchored in the harbour secured the supply of provisions and maintained communication with to the outside.

On 22 August, after having waited in vain for the arrival of a naval squadron, Daun had 3,000 men, including 5 grenadier coys, embarking in Naples on tartanes. They were transported to Mola under the protection of an Imperial cutter. From there, they marched towards Gaeta.

On 23 August, the small Imperial flotilla forced the enemy vessels to retire to Mola. This was necessary to allow the besiegers to open the trench.

On 24 August, the Imperial flotilla opened against the suburbs of San Carlo. Captain Molck then established two shore batteries, each with two mortars, at the northern end of the suburb, near the Augustinian Monastery, the fire of which soon forced the enemy to withdraw.

On the same day (24 August), Daun set off from Naples to join the siege corps before Gaeta, entrusting command of the troops left in the capital to Colonel Baron Heindl.

The siege corps counted 3,500 men with 50 heavy guns under Captain Molck. The artillery was served by a small detachment of Neapolitan artillerymen and 16 Imperial artillerymen.

After reconnoitring the vicinity of the fortress, Daun decided to direct his attack against the Sant Andrea Bastion and the San Giacomo Bastion. He confided the siege to General Baron Wetzel, who had just arrived from the Abruzzi, and returned to Naples.

In the night of 31 August to 1 September, during a violent thunderstorm, Wetzel opened the trench at 600 paces from the salient angle of the Sant Andrea Bastion.

In the first days, the siege works progressed very slowly on this very stony terrain. There were not enough engineers and trained sappers, and the peasants requisitioned for the job were of little use.

In the night of 15 to 15 September, the first parallel was finally completed and two batteries (a total of 25 pieces) opened against the place. Since the beginning of the siege, the besiegers had only lost 19 men killed and 160 wounded.

The batteries of the first parallel, supported by the fire of a third battery (6 pieces) set up on the Monte Secco, made a breach in the right face of the Sant Andrea Bastion, but even after several days of shelling it was not yet practicable. Out of consideration for the city, General Wetzel refrained from using the mortar batteries for a bombardment; on the other hand, the cannon barrels were already badly worn out by the sustained fire. Wetzel considered to convert the siege into a blockade. As long as the enemy galleys commanded the sea, success was almost impossible.

In the second half of September, FZM Daun joined the siege corps before Gaeta.

News was now coming in from all sides that the Papal States, at the urging of the French and Spanish envoys, had apparently dismissed part of their troops from Roman service and that they were making preparations in Port' Ercole near Orbetello for embarkation for Gaeta. In the fortress itself, the garrison used all its strength to close the breach in the Sant Andrea Bastion.

Daun recalled 1,000 men from the Abruzzi to join the siege corps. He decided to launch an assault as soon as the breach would be practicable. General Wetzel would lead the assault. The storming parties would be organised in three columns:

Meanwhile the Imperial flotilla (1 galiot and 8 feluccas) would sail along the coast towards the harbour to support the cavalrymen.

Daun planned the assault for 30 September, because he had learned that Tursis' flotilla would be absent from Gaeta that day to fetch provisions.

The Storming of Gaeta

On 30 September in the morning all detachments assigned to the assault silently moved to their assigned positions. They then waited for the signal to launch the attack and, at 2:00 p.m., when the agreed bombing from Monte Secco could be heard, they broke out of their positions in a rush. The grenadiers of Gschwind Infantry and Daun Infantry, at the head of the right column led by Wetzel, rapidly reached the breach. The defenders fought bravely, but after a combat which lasted 30 minutes, Wetzel's troops made themselves masters of the breach. However, the situation of the right column was becoming more difficult.

FML Marquis de Vaubonne and Colonel Count Vehlen at the head of the volunteers of the third column broke through the counterscarp and then advanced towards the Porta di Terra and the curtain wall near San Giacomo. They soon joined the bns of Wetzel Infantry and Heindl Infantry, belonging to the main column, and engaged combat with 500 Spaniards under Maréchal de camp de Caro, defending the San Giacomo Bastion. Vaubonne managed to force his way through the Porta di Terra and to attack the defenders in rear and flank. Colonel Camps along with several of the defenders fell while the rest took refuge in the castle, the Torre d'Orlando and in the houses and gardens of the town.

The Imperialists were now master of the breach and of the Sant Andrea Bastion, but combat still raged in the immediate vicinity. To the east of the breach, along the walls up to the Porta di Terra, decision had not yet been reached, and fighting was particularly violent at San Giacomo. General Wetzel directed a detachment of his regiment under Grenadier Captain Boxberg against the left flank of the defenders. This detachment was soon joined by others and together they attacked the defenders of San Giacomo. General Caro was badly wounded and a powder keg exploded accidentally, causing great confusion in the ranks of the defenders, who broke and fled.

Strangely enough, the Duke of Ascalona had remained idle in the castle for the entire course of the battle, which lasted several hours. Now that the main defences of Gaeta were lost, he marched northeastwards at the head of the last reserves to recapture the Porta di Terra. His advance was soon stopped and Ascalona had to turn back. He had to sacrifice his rearguard, commanded by the Duke of Bisaccia, to take refuge in the castle. During these combats, On this occasion, FML Marquis Vaubonne was wound on his left thigh.

Daun, who had taken part in the last advance of his troops at Vaubonne's side, rallied his scattered detachments and immediately made preparations to attack the castle itself.

Shortly afterwards, the Spanish Captain Villa Vicente appeared in the imperial camp, to offer the capitulation of the castle on behalf of Ascalona. The capitulation was granted under condition that the entire garrison would surrender as prisoners of war. Some 250 officers and 2,000 men deposited arms. The Duke of Ascalona, the Duke of Bisaccia, the Prince Cellamare and a few other leaders of the Bourbon party were brought to Naples.

With the fall of Gaeta, the Bourbon had lost their last stronghold in the Kingdom of Naples and the Imperialists completed the conquest of the kingdom shortly afterwards.

The artillery was under the command of General Orazio Copula.

The galley flotilla of the Duke of Tursis was anchored in the harbour.