In May 1798, the French concentrated a large army (131 bns and 216 sqns, approx. 80,000 men) in the plains of Saint-Symphorien near Mons and marched to Braine-l’Alleud. The Duke of Marlborough tried to avoid a battle with the superior enemy and made an evasive movement towards Leuven (aka Louvain).

Throughout the month of June, the indecisiveness of the French led to a sort of armistice.

Then, on 6 July, the French suddenly occupied Ghent, Passchendaele and Bruges. On the same day, Prince Eugène de Savoie arrived at Marlborough’s camp and they both discussed how to react to the French offensive. The result of these talks was the famous victory of the Allies at Oudenarde, on 11 July.

Soon afterwards the Duke of Berwick arrived with additional French troops. On 15 July, the Army of the Moselle also arrived at Bruxelles.

On 18 July, FM Count von Nassau received orders to march with Imperial and Palatine troops to Ath, where he would make a junction with Marlborough’s Army.

The French remained in there camp, Marlborough proposed to surprise Paris, but Prince Eugène refused this idea and suggested to lay siege to Lille. Finally, Eugène’s proposal was accepted.

On 10 August, Prince William of Orange was detached from “Great army” with 34 sqns and 31 bns to join the siege corps.

On 12 August, the siege artillery, transported from Bruxelles, crossed the Scheldt River and, from there, was escorted by Marlborough’s troops to Menin.

Lille was a well equipped fortress. The best of the French officers and generals were there to defend this important place. The commander of the place was Maréchal Louis-Francois de Boufflers, who had arrived at Lille on 27 July.

The garrison initially consisted of 17 bns and 4 sqns. On 10 July, the Duke of Berwick sent a reinforcement of 3 bns and 3 sqns. 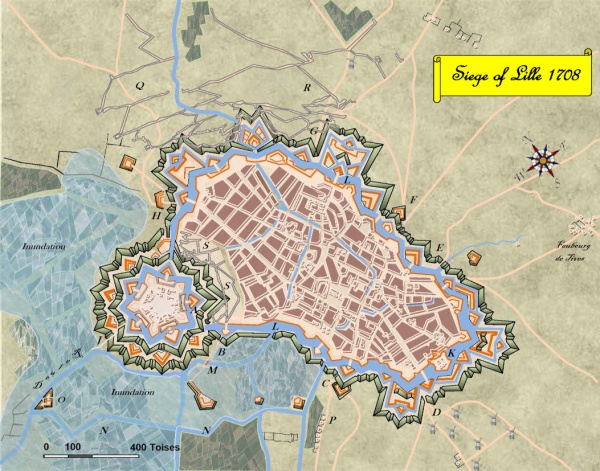 The Allied leader divided their responsibilities: Prince Eugène was responsible for the siege itself, while Marlborough should cover the siege corps and prevent the arrival of any relief.

When Berwick was informed that the Allies planned to lay siege to Lille, he effected a junction with the army of the Duc de Bourgogne and advanced towards Bruxelles, hoping to draw the Allies away from Lille.

On 12 August, Marlborough immediately reacted to the French attempt and took position at Helchin (aka Helkijn) with 72 bns and 124 sqns to cover the siege corps and secure the line of supply from Bruxelles, Ath and Oudenarde. The same day, Prince Eugène left Helchin with his troops and marched to Templeuve. Still the same day, Prince William of Orange (34 sqns and 31 bns) arrived near Lille.

On 13 August, Eugène’s troops crossed the Marque River near Pont à Tressin and the Deule River and, at 8:00 a.m., arrived before the Andreas Gate of Lille.

The siege corps now consisted of 53 bns and 89 sqns.

On 17 August, the siege artillery (80 heavy guns, 20 big mortars and 4,000 ammunition wagons) arrived. For two days, 10 bns of Imperial, Saxon and Palatine troops assumed trench duty under the command of FZM Prince Württemberg. Other troops under the command of Prince William de Orange did the same for three days. Despite the fact, that the circumvallation entrenchments were not yet finished, siege troops began digging the trenches.

On 24 August, two batteries opened on the city walls.

On 1 September, to the astonishment of the French, Marlborough marched to the lowland of Lille, where he took position and waited for the attack of the French army. Prince Eugène should send all disposable troops to support Marlborough.

On 4 September, all troops that Eugène could spare joined Marlborough.

On 5 September, Marlborough had 102 bns and 232 sqns deployed to engage the French. However, the French general staff considered that the Allied positions were unassailable and abandoned their plan to offer battle.

On 6 September, the troops that Prince Eugène had detached to reinforce Marlborough’s Army rejoined the siege corps.

By 7 September, there were already 13 batteries with 155 guns in action, causing heavy damages.

On the evening of 7 September, 1,600 grenadiers, 1,600 fusiliers, 2,000 workmen and 30 carpenters, organized in 4 columns, attacked the counterscarp. Four bns belonging to the trench corps formed the reserve. The attack was thrice renewed, the attackers lost 399 men killed and 211 wounded.

On direct orders of King Louis XIV, the French relief army advanced again. Prince Eugène hastened once more to support Marlborough. After some inefficient gunfire, the French army retreated to the right bank of Scheldt.

On 21 September, Prince Eugène was wounded at the head and Marlborough took the command of the siege. In regard of the high losses suffered by their soldiers, both generals decided to rely on methodical attack with mines. On the same day, additional British troops landed at Ostend.

On 28 September, at the Engagement of Wijnendale, the French failed to intercept a very important supply convoy.

In the night of 7 October, Marlborough marched with 60 bns and 120 sqns to Oudenburg. The Duc de Bourgogne and Vendôme decided to seize this opportunity to capture Ath and Leffinge.

In the night of 18 October, the French surprise attack against Ath failed.

In the night of 25 October, the French managed to capture Leffinge by surprise.

On 1 October, Prince Eugène, who had recovered from his wound, re-assumed command of the siege corps.

On 22 October, the city of Lille was attacked and Boufflers surrendered the city.

On 25 October, Boufflers evacuated the city of Lille and retired in the Citadel of Lille with 4,500 men while 1,500 horse and all transportable wounded marched to Douai. Prince Eugène immediately occupied and started siege of the citadel.

Boufflers did not expect any relief by French army, but he was determined to defend the citadel for as long as possible.

On 8 December, the Allies completed the erection of siege batteries. Boufflers realized that he had no further chance and surrendered on 9 December, obtaining free withdrawal “with military honours.”

After the surrender of Lille, the Allies decided to capture Ghent. Marlborough marched with his troops to this fortress and, on 10 December, Prince Eugène sent the siege artillery to Ghent.

On 11 December, Prince Eugène set off from Lille with the siege corps, leaving 20 bns and 2 sqns as garrison, and marched to Ghent.

On 16 December, Prince Eugène made a junction with Marlborough’s Army.

On 30 December, after a siege of 13 days, Ghent surrendered. The Allies then took up their winter-quarters.