The siege lasted from June to August 1709

For the campaign of 1709, with the superiority of the French forces, the Allies could not risk an open battle. The Dutch field deputies in particular did not want to take such a chance. Therefore, Prince Eugène de Savoie and the Duke of Marlborough decided to lay siege to Tournai.

On 26 June, Lieutenant-General Dompré received the order to march with his army, reinforced by British General Combé with 10 bns and 30 sqns towards Tournai.

On 28 June, Prince Eugène marched with his army to Tournai and his troops surrounded the place. His cavalry was placed behind the infantry. The chain of posts began at Antoing and led by way of Esplechin and Camphin to the lower part of the Scheldt. On the left bank of the Scheldt, south of Tournai, the circumvalation line began near Cereq and went westwards between Erc and Barges, by way of Orsecq, while, to the north, it went from Salé and ended to the northeast on the bank of the Scheldt. On the right bank the line began at Vaulx, and extended by way of Rumillies, the forest of Brenze and north of Tournai to the Schledt. As a result, the garrison of Tournai was denied any communication with the outside.

The French commanders contented themselves to cover the border: 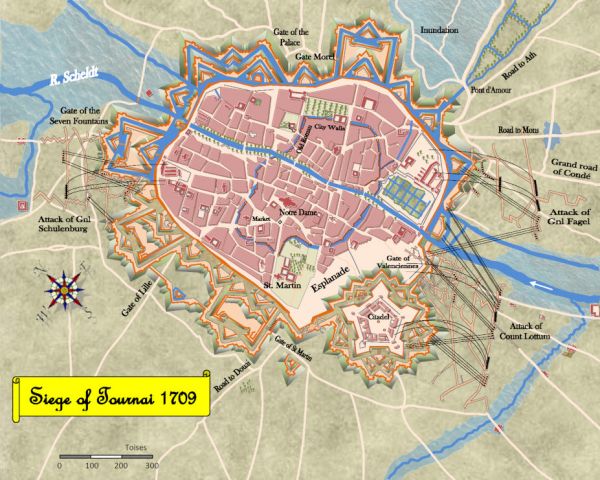 Map of the siege of Tournai in 1709 – Copyright: Dinos Antoniadis

Tournai was one of the strongest French fortresses. Lieutenant-General Louis-Charles de Hautefort, Marquis de Surville commanded the place. He was seconded by the Maréchaux de camp Ravignan and Dolet. The garrison consisted of 13½ bns (9 of them regular line infantry), 5 free corps, 2 artillery companies and 2 Irish brigades, for a total of approx. 7,000 men. The place had enough provisions and ammunition to sustain a siege of four months.

In the night of 28 to 29 June, Prince Eugène had bridges built over the swampy ground to ensure the communication between both banks of the Scheldt River.

The siege corps consisted of 60 bns and 70 sqns. The chief in situ was the Duke of Marlborough.

An "Observation Army" under Prince Eugène had to cover the siege. Its right wing was between Pont-à-Trossin, its centre at Esplechin and its left extended to Saint-Amand and Mortagne.

Surville had all locks blocked, causing the water to accumulate in such a way that the communication between the two banks of the Scheldt became impossible.

On 3 July, Lieutenant-General Bettendorf reached Oudenarde with the whole Allied artillery. However, the flooding did not allow his convoy to cross the Scheldt.

On 4 July, the siege began.

In the night of 8 to 9 July, the trenches were simultaneously opened on all three attacks.

The siege troops were successful and came within 200-300 paces from the counterscarp but heavy rain delayed further work.

On 10 July, the first part of the siege artillery finally reached Tournai. The French sallied out with 500 men, but the Spanish (probably Walloons from Saint- Vallier Infanterie) soldiers in the vanguard deserted and the rest returned to the city

On 11 July, the rest of the siege artillery arrived at Tournai. Overall, 100 heavy guns and 60 mortars had been transported by ships from Ghent, escorted by the Palatine infantry and dismounted dragoons. However, due to the heavy rain, the trenches were filled with water and the artillery pieces could not be put in position.

On 13 July, the shelling of Tournai finally began. Once more batteries had been built, the besiegers managed to drive the French out of their entrenchments in front of the citadel.

In the night of 20 to 21 July, the artillery of the defenders opened heavy fire against the besiegers. The French attempted another sally near the Valenciennes Gate. The sally was repulsed but at the loss of one engineer killed an two wounded as well as about 100 soldiers and workmen killed and wounded. The siege works were in disarray.

On 28 July, Prince Eugène and the Duke of Marlborough inspected the siege works. A French counterattack with 200 men was repulsed in the Schulenburgs sector. De Surville, the French commander, held a council of war where it was decided to surrender the city and to retreat to the citadel with what was left of the garrison (4,000 men out of 7,000) .

The Marquis de Surville send the Marquis de Ravignan to Versailles to obtain orders from the Louis XIV, but the Court refused the capitulation of the citadel.

On 1 August, Lieutenant-General Lottum proceeded with the siege of the Citadel of Tournai.

On 8 August, Lieutenant-General von Schulenburg opened a second attack against the Citadel of Tournai, but the coordination between Lottum and Schulenburg was poor.

After the handover of the city of Tournai, the Maréchal de Villars expected an attack by the Allies and concentrated his army.

On 6 August, both armies faced each other in combat readiness but none of the commanders wanted to start the battle So, the armies remained in their position until the end of August.

On 22 August a bomb exploded in the trench, shattering Captain Boyneburg's legs and shrapnel severely wounding his upper body but he remained at his post and was only carried away after two hours to his regiment where he died.

On 26 August, the French blew up a mine which killed more than 400 men and mortally wounded the chief engineer du May.

On 27 August, a sally from the citadel was betrayed by deserters and repelled by the Palatine Haxthausen Infantry.

On 31 August, due to lack of food, Surville had to offer to surrender, but the Allies did not accept his proposals.

On 1 September, the Allies resumed the shelling of the Citadel of Tournai. Surville threatened that, if the garrison had to surrender as prisoners of war, he would blow up the bastions.

On 3 September, the Duke of Marlborough accepted Surville's conditions and the garrison (2.400 men only) left the citadel with military honours and marched to Ghent.

After the fall of Tournai, the Maréchal de Villars feared that the Allies would now besiege Condé and Valencienes. He therefore moved his army to the region of Douai between the Scarpe and Scheldt rivers.

Because the French still enjoyed numerical superiority, the Allied commanders decided to march against Mons .

On 3 September in the evening, 60 sqns led by the Prince von Hessen crossed at Scheldt River near Montagne.

The position of each individual unit during the siege is pretty clear from the maps (see our "References" section) and – with a few minor exceptions – almost identical in all sources. However, the exact composition of the brigades (which unit belonged to which brigade) is not entirely clear from these maps. The nationality of the brigade commanders is not necessarily identical with the nationality of the units under their command. The minor differences in the maps can be explained by units being repositioned or moved into or out of the siege lines.

Commander-in-Chief: The Duke of Marlborough

On the right bank of the Scheldt River:

On the left bank of the Scheldt River:

N.B.: Details as to the number of regiments deployed for the siege of the citadel differ: according to Schulenburg (p. 395) 39 bns were tasked with besieging the citadel, of these 22 were under Count Lottum's command. According to Eugen (p. 89) there were 23 bns under Lottum and 13 under Schulenburg. The list above however has only 30 bns.

Brodrick, Thomas: A Compleat History of the Late War: In the Netherlands, p. 293-304

Harald Skala for the initial version of this article, Dinos Antoniadis for the map and Jörg Meier for the orders of battle