The campaign lasted from July to October 1710

For the campaign of 1710, Duke Victor Amadeus of Savoy was supposed to assume supreme command of the Allied army in Northern Italy. However, because of the currently difficult relationship between the duke and Emperor Joseph I, supreme command was confided to Field Marshal Wirich Count Daun.

Daun had left 16 bns guarding the Alpine passes near Susa. For the campaign he could assemble 33 bns (the 11 Prussian bns would not join the main army until the end of July). 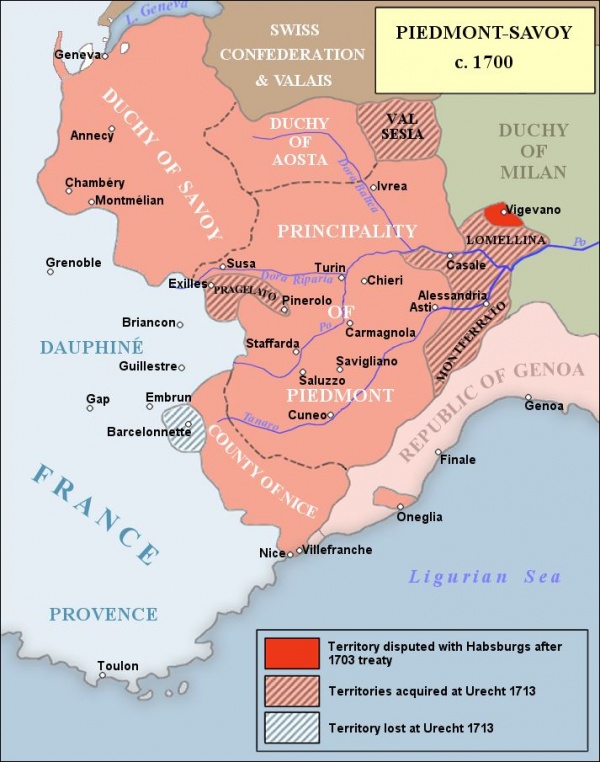 On 7 July 1710, the main body of FM Daun's army (33 bns) left the camp at Montanaro and marched by way of Leini, Beinasco towards Scalenghe where it made a junction with the Savoyard field army. Throughout the march, FML Baron Battée with his dragoons opened the road, a day's march ahead.

The main army then remained in Scalenghe until 11 July, while 8 bns led by FML Baron Zumjungen and Major-General Count Daun were sent ahead to Demonte in the Stura Valley.

On 12 July, the Allied army proceeded by way of Cardè and Saluzzo to Castiglione (probably Castiglione Falletto).

On 14 July, the Allied army reached Bernezzo. From there, the Savoyard Savoia Dragoons (unidentified unit) were sent to Borgo-San-Dalmazzo.

On 16 July, Zumjungen's 8 bns marched from Demonte to Aisone where they made a junction with the Prussian Contingent (11 bns).

On 18 July, the Allied army marched to Sambuco. One detachment led by the Marquis d'Adorno was sent to occupy the Colle Longet Pass but it stopped at Pontechianale. FML Count Harrach with a strong infantry corps and all the cavalry marched by Salza-Morena (unidentified location) to the Tinée Valley and occupied the pass Col-di-Pelosetta (present-day Cime de Pelousette).

On 19 July, the main Allied army reached Bersezio, the vanguard of Major-General Count Daun reached Maison-Méane in the Oronaye Valley. The Artillery Colonel Steinberg got the order to follow the main army with heavy guns and mortars.

On 21 July, the Allied army reached Larche, 10 bns led by FML Zumjungen were sent to the right wing to cut the line of communication between the French entrenchments at Tournoux and the garrison of Larche.

On 22 July, the heavy guns arrived in front of Larche. After a few shots, the garrison surrendered under condition of free withdrawal.

On 23 July, the Allied army encamped between Larche and Meyronnes from where the positions of the French around Tournoux were visible.

On 24 July, FML Harrach returned with his corps to Salza-Morena because his troops were threatened by stronger French forces.

From 24 to 26 July, the Allied army remained between Meyronnes and Certamussat, FM Daun reconnoitred the French positions down to Vars.

On 25 July, FML Harrach received the order to march with his troops from Salza-Morena to Le Châtelard. At the same time, General Marquis d'Adorno advanced from Chianale to Ceillac on the Melezet River and cut the line of communication of the French between the Queyras Valley and the Vars Pass.

On 27 July, the main Allied army marched from its camp between Meyronnes and Certamussat to a new one on the slope of the Col-de-Bouchier, the French retreated to Château-de-Vars.

On 29 July, the Allied garrison of Larche captured a redoubt on the Ubaye River, the French retreated without resistance to the opposite bank of the river and destroyed the bridge.

On 31 July, FML Harrach's detachment made a junction with the main Allied army. Lieutenant-Colonel Kuhn from Bagni Infantry with 600 men and the cavalry available attacked the French bridgehead at Jausiers, the defenders fled to Tournoux.

From 1 to 14 August, the main Allied army remained in its positions. FZM Rehbinder with his corps marched from Susa by way of Oulx to Cesane (Cesana Torinese), and later to La Vachette (unidentified location). Weakened by the many detachments, the main Allied army could not attack the fortified camp of the French at Tournoux. The soldiers suffered from the great cold in the mountains and lacked provisions, consequently the number of sick increased.

On 14 August, the main Allied army started its retreat towards the Stura Valley, marching by way of Argentera, Sambuco, Demonte, Caraglio, Cardè and Pinerolo to Fenestrelle. The Vaubonne Dragoons, arriving from Naples, joined the main army.

On 17 August, General d'Adorno (10 bns) made a junction with FZM Rehbinder after a difficult march in the Upper Dora Riparia Valley. On 27 August, the main Allied army resumed its retreat by the Col de Sestriéres (present-day Colle Sestriere) to Saint-Sicaire (present-day Sansicario Torinese), encamped on the headwaters of the Dora Riparia River and established contact with FZM Rehbinder's Corps.

The Allied main army remained in these positions until 20 October. Then the army marched under rain and snow into the plain of Piedmont, where it arrived at the end of October.

The winter-quarters of the Allied army were as follows:

Under the given circumstances, with an unreliable ally (Duke Victor Emanuel), FM Daun could not achieve a better result in the campaign of 1710.

The French Maréchal de Berwick had overestimated the strength of the Allies and therefore limited himself to setting up his troops in a cordon from northern Savoy to the Var and had remained in a complete defensive position.