During the campaign of 1710, the Allies had already captured the fortresses of Douai and Béthune. However, in September, any attack against the strong positions of the French army seemed impossible and the Allies turned their attention to the fortresses of Saint-Venant and Aire-sur-la-Lys. Both place were besieged simultaneously.

Their Allied army marched southwards, the rearguard (10 bns and 18 sqns with 12 guns) took position on the road leading from Arras to Saint-Omer, thus cutting the line of communication between Saint-Venant and Aire and the French army of the Maréchal de Villars.

Two columns led by Prince Eugéne took position along a line extending from Ames-Rely to Estrée-Blanche. Meanwhile, the two columns led by the Duke of Marlborough took position from Divion by way of Auchel up to Lillers. The Dutch and British quartermasters Cadogan and Dopff accompanied by a strong detachment established a new camp on the right bank of the Lys River, near of Saint-Venant and Aire-sur-la-Lys. General Lagnasco with 6 bns and 2,000 horse crossed the Lys and took position on its left bank. 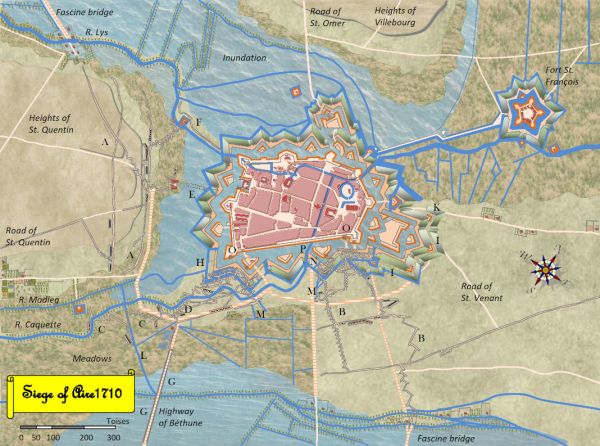 Map of the siege of Aire-sur-la-Lys in 1710 – Courtesy: Dinos Antoniadis

The Fortress of Aire-sur-la-Lys was well fortified. Lieutenant-General de Jay was the commander of the fortress, but at the last moment, the Maréchal de Villars sent Lieutenant-General marquis de Goesbriant, who had his full confidence, to take effective command. The garrison consisted of 15 selected bns (including 12 bns from the field army), 3 dragoon rgts (a total of 8 sqns), in addition there were enough artillerymen, miners and sappers. Finally, there were 4 coys in the detached Fort Saint-François.

On September 6 1710, the Allied siege corps (40 bns and 40 sqns) under the command of the Prince von Anhalt-Dessau arrived at Aire-sur-la-Lys. Lieutenants-generals von Bettendorf and Gersdorf with 20 bns occupied the hills north of the fortress on the left bank of the Lys River, Lieutenant-General von Bautzen and the Duke of Argyll also with 20 bns took position on the right bank of the Lys between the river and the road leading to Béthune. The 40 sqns of the G.d.C. Earl of Albemarle were distributed on both banks of the Lys, 26 sqns on the left bank and 14 sqns on the right bank.

At first, the Allies tried to drain the water from the inundation.

By 12 September, the Allies had drained the inundated plain around Aire-sur-la-Lys. They decided to make two distinct attacks against the two sides of the fortress. British-Dutch troops would lead an attack on the south-east side (the Thiène Bastion and its outworks), while the Imperialist troops would lead an attack against the old castle between the Beaulieu Bastion and the Vert Bastion. For each of these attacks, siege works would be conducted by 2,500 men led by Chief-Engineer des Roques.

In the night of 12 to 13 September, the Allies opened the trenches under the protection of 5 bns and 5 grenadier coys.

In the following nights, the Allies continued to work at their trenches, harassed by the defenders. The chief engineer was beheaded by a cannonball and many of the workers were killed or wounded.

Until 19 September, the Allies placed the heavy guns arriving from Béthune in their batteries. They then opened fire on the fortress.

On 21 September in the evening, the redoubt facing the second attack was bombarded so heavily that the French had to retreat. Immediately, 200 grenadiers stormed the redoubt, but were ousted back by the returning defenders. The fight raged back and forth. In the end, the grenadiers, who had lost 100 men and exhausted their ammunition, had to retire from the redoubt.

In the night of 21 to 22 September, there was fierce combat in the first attack and here too the defenders were able to hold their positions. The same night, the second attack was stormed after heavy fight with high losses on both sides (the French Lieutenant-General Marquis de Listenoise was killed, Colonel Hottelin was seriously wounded and taken prisoners).

In the nights from 24 to 26 September, the siege corps repaired the damage. A sortie of the defenders, led by Engineer-Captain Marquis de Tirboutot, was unsuccessful.

On 27 September, the Allies decided to storm the entrenchments and their connections with the fortress. Two bridges were prepared. The fortress was showered with a hail of cannonballs and bombs but one of the bombs fell into the ditch next to the bridges and destroyed both.

The Prince of Anhalt-Dessau prepared a second attempt to storm the place and two bridges were built over the Lys River. However, the defenders attacked the bridges before the Allies could launch their assault and set them on fire with pitch wreaths, they also managed to burn the prepared wood supplies and the fascines.

The failures in the second attack were counter-balanced by significant progress of the first attack. A battery of mortars was erected there and the covert way was put under fire. Therefore, Goesbriant decided to expel the workers.

In the night of 29 September, 1,200 French surprised the workers in the trenches, 100 were killed or wounded, the rest fled. However, before the French could destroy the trenches, General Grumbkow led the Prussian Guard, one infantry rgt and some other troops in a counter-attack and drove them back to the fortress after a half-hour fight.

On 30 September, the Allies finished their work in the first attack and erected two new batteries. Since the work on the second attack was not progressing, the engineers requested the opening of a third attack against the Arras Bastion and the stone dam, which was still occupied by the French and the redoubt there.

On 1 October, the Allies immediately set themselves to work on this third attack.

At the beginning of October a persistent rainy weather set in, which made the siege work very difficult. Supplying the troops also became increasingly difficult.

In the night of 1 to 2 October, the French made another sortie against the workers in the first attack, but they were driven back without success.

In the night of 2 October, the third attack of the Allies was already within 150 paces from the walls. The French evacuated their positions on the dam and retreated to the redoubt.

In the night of 3 October, from the Allied third attack, 100 grenadiers tried to storm the redoubt. The action failed and 50 grenadiers were killed.

On 5 October in the evening, after the redoubt facing the third attack had been fired upon by several guns, 200 grenadiers and 400 fusiliers tried to stormed it again. This time, they were successful but suffered severe losses (500 men killed, General Efferen wounded, Major Dohna beheaded by a cannonball).

In the night of 6 October, the Allies posted in the first attack stormed the ravelin. Nearly all defenders were surprised and killed.

On October 11, the French made a sortie from the Arras Gate against the third attack but were repulsed.

In the night of October 12, the Allies posted in the third attack reached the forward trench. The battery of 28 guns and 10 mortars began to bombard the left face of the Arras Bastion and the right face of the ravelin. For unknown reasons, the Allies did not try to storm the place in the next few days.

In the night of 15 October, in the first attack two columns of Allied grenadiers stormed the two flèches. The first was occupied. However, in the second flèche, the defenders put up a fierce resistance, turning two captured guns and firing them at the besiegers standing in the trenches. With a single shot 6 British engineers were killed, in a short time many of the soldiers standing there were killed. The Allies were unable to capture the second flèche and were forced to retire to the glacis.

On 22 October, the Prince of Anhalt-Dessau gave the order to storm the defensive works in front of the third attack. The assault was to be carried out by 500 grenadiers and 500 fusiliers. The assault was postponed twice due to various problems.

On the 1st attack, Goesbriant repeatedly managed to beat back the assaults launched from the first attack of the Allies. Through effective gunfire from the hornwork, he succeeded again and again to cause great damage to the Allies.

In the aftermath of the 31 October events, 200 grenadiers and 300 fusiliers, accompanied by 600 workers, launched an assault from the third attack and settled at the foot of the palisades. The French counter-attacked the workers at the point of the bayonet. Allied troops shot at themselves by mistake. Two mines exploded killing 50 of the attackers, who then had to retreat with the loss of another 300 men killed. The French were able to hold the flèche and counterscarp.

On 27 October, the Allies managed to occupy the main square of the fort facing their first attack. Goesbriant withdrew his guns from the ramparts during the day to protect them from the fire of the heavy siege guns.

On 28 October, Prince Eugène and the Duke of Marlborough held a council of war in their headquarters. Almost all generals, Dutch and British, voted to raise the siege but Prince Eugène and the Duke of Marlborough insisted on the capture of the fortress. The assault was to be carried out simultaneously in both attacks, 2,000 grenadiers from the field army were sent to support the siege corps.

After several attempts between 30 October and 2 November, affected by the bad weather, the Allies managed to occupy the counterscarp, to shoot into the ravelin and to breach the Arras Bastion.

On 7 November, after further preparations, the Allies occupied the counterscarp in front of their third attack.

On 8 November, a bomb hit the powder magazine in the ravelin and the defenders had hardly any ammunition left.

On 9 November, with the authorisation of Louis XIV, Goesbriant asked for a honourable surrender and negotiations began. The capitulation was signed in the evening by Prince Eugène, the Duke of Marlborough, the Dutch deputies J. Petters and Pollins and Lieutenant-General Marquis Goesbriant. The garrison surrendered with the honours of war.

On November 12, 3,628 men left Aire, while 1,600 wounded remained in the fortress. Count Moritz von Nassau-Woudenberg was appointed as commander of the Fortress of Aire and a combined detachment occupied the place.

During the siege, the Allies had lost 2,741 men in the first attack, and 3,827 men in the second and third attacks. The siege had lasted from 12 September to 9 November.

The Maréchal d'Harcourt had not been able to prevent the siege of Aire-sur-la-Lys, but had concentrated his efforts in the strengthening of the Fortress of Saint-Omer. Count d'Estaing got the order to concentrate part of his troops at Pont-Labesse and from there to escort with 6 bns a big convoy of 38 ships from Dunkerque to Saint-Omer.

On 14 November, after surrender of Aire-sur-la-Lys, the Allies left their positions. On 15 November, they crossed the Canal of La Bassé and marched towards Lille, from there were their troops were sent to their winter-quarters.

Summary: 15 bns (including 12 bns from the field army), 3 dragoon rgts (a total of 8 sqns) with enough artillerymen, miners and sappers.

Fort Saint-Francois had a garrison of 4 coys.

Jörg Meier for the French order of battle