On 5 September, the Prince Nassau-Oranien-Dietz marched with the siege corps to Busnes

By 6 September, the Allies had completed the blockade of the Fortress of Saint-Venant. The siege corps was separated into two bodies by the Lys River and Prince Nassau-Oranien established two pontoon bridges at Haverskerque and Saint-Floris to ease communications. The Robescq and Guarbeque creeks were derived to drain the flooded meadows around the fortress. 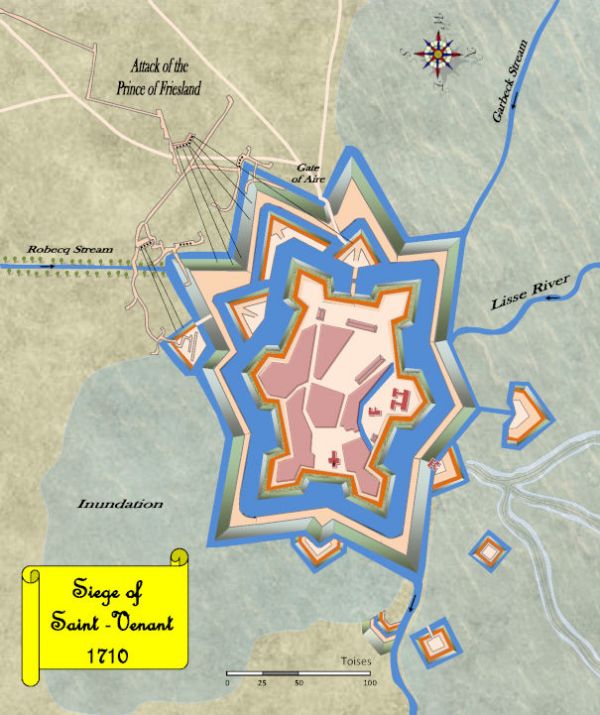 Map of the siege of Saint-Venant in 1710 – Copyright: Dinos Antoniadis

The Fortress of Saint-Venant was under the command of Brigadier de Selve, the garrison consisted of 7 bns including 300 detached grenadiers, for a total of 3,000 men.

On 16 September, the Allies opened the trenches in front of Saint-Venant.

During the following days and nights, the defenders made several sorties and killed many workers as well as fusiliers guarding the siege works.

On 20 September, the Allies established a battery of 6 guns in the middle of the parallel and immediately began shelling the fortress, destroying some guns.

On 21 September at night, the Allies established another battery of 5 guns near the Robecq creek in front of the contregarde.

On 23 September at night, the defenders made a new sortie. Colonel Béranger-Dugua led 700 men and attacked the worker on the right wing, 60 of them were killed or wounded, the rest fled. The French then destroyed part of the trenches, but lost many men during their retreat, including Colonel Béranger-Dugua, who was killed. The siege corps repaired the damages in the same night.

On 24 September, the Allies installed 3 mortars.

In the night of 28 September, the siege corps established two bridges and one dam crossing the dyke. The defenders put up a fierce resistance, losing more than 500 men.

On 29 September, the Prince Nassau-Oranien decided to storm the salient angle of the middle bastion and the contregarde during the night. As planned, 150 grenadiers and 300 fusiliers attacked both and drove the French back. The defenders were already lacking ammunition, and one powder magazine was blown up.

On 30 September in the morning, negotiations of the terms of capitulation began. De Selve signed the capitulation in presence of Prince Eugène, the Duke of Marlborough and four Dutch deputies. The garrison – now only 2,000 men – surrendered with the honours of war but was not allowed to bring any gun nor wagon when it left the fortress. The Allies immediately occupied the Aire Gate with 300 foot.

On 2 October, the French garrison left Saint-Venant and marched to Arras.

Summary: 7 bns including 300 detached grenadiers, for a total of 3,000 men (only 4 bns according to Quincy)

Jörg Meier for additional info on the orders of battle