The siege lasted from August to September 1712

On 24 July 1712, Villars's Army decisively defeated the Allied army (imperialists and Dutch) of Prince Eugène de Savoie in the Battle of Denain. This battle saved the French monarch and completed the disintegration of the Coalition.

Villars followed up his victory at once. Montesquiou captured Marchiennes and Albergotti Saint-Amand, and in these places all Eugène's reserve stores, pontoons and guns fell into the hands of the French. 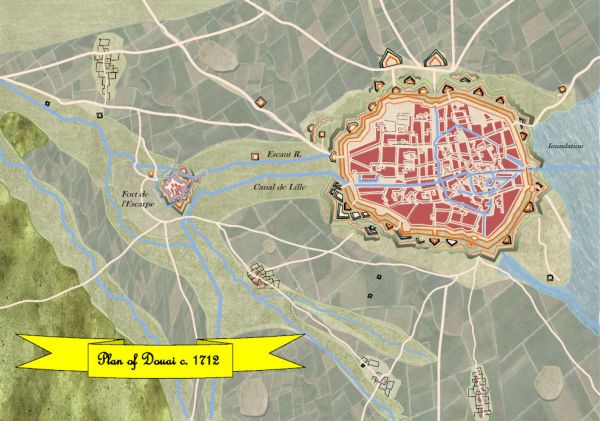 Map of the siege of Douai in 1712 – Copyright: Dinos Antoniadis

Douai was occupied by the Allies since 1710. Its garrison initially consisted of 5 ½ bns and 150 horse all under the command of Count Hompesch.

On 1 August, 1 bns from Lille and 2 bns from Béthune arrived to reinforce the garrison of Douai which then counted 3,200 men (Mecklenburg Krassow Infantry under Lieutenant-Colonel Bohlen, Münster Nagel Infantry, Dutch Saint-Maurice Infantry, Münster Landsberg Infantry, Württemberg, Mecklenburg Flohr Infantry, Bohlen, Dutch de Bruay Infantry). The artillery mounted on the walls consisted of 35 bronze-guns, 50 iron-guns, 9 mortars and 16 howitzers. Some 400 men of garrison of Douai had been detached to defend Fort Scarpe.

The French siege corps sent against Douai consisted of 40 bns and 36 sqns with 56 guns and 24 mortars. Lieutenant-General Albergotti commanded this corps. Engineering works were supervised by de Valori while artillery was placed under the command of the Chevalier Destouches. Two attacks were planned: one on the Fortress of Douai (4 bns), the other against Fort Scarpe (1 bn and 8 grenadier coys).

In the night of 14 August, the French opened trenches in front of Douai.

In the night of 19 August, the French completed a battery of twenty 24-pdr guns and six 16-pdr guns and another battery with 17 mortars.

On 19 August, the two French batteries opened against Douai and Fort Scarpe. However, the excellent irrigation system around Douai allowed the Allies to flood several areas, thus seriously hindering the progress of siege works. This was not the case of Fort Scarpe where the preparation for an attack were easier.

In the night of 21 August, the French erected a battery of ten 24-pdr guns overlooking the covered way of Fort Scarpe and the two neighbouring redoubts.

In the night of 26 August, the French artillery finally created a breach in the walls of Fort Scarpe whose garrison, then reduced to only 200 men, capitulated and was taken prisoners. The French captured 18 guns in the fort.

On 27 August, the French finally managed to repair damages done to their trenches by the flooding organised by Lieutenant-General Hompesch.

In the night of 29 August, a battery was erected in the second parallel and another one just 40 meters from the covered way.

In the night of 30 August, the Allies evacuated the defensive work known as “Piedmont”.

In the night of 3 September, 5 French grenadier coys tried to storm the lunette near the “Piedmont” work but were driven back. The same night, the Allies destroyed two fascine bridges above the trench. The French immediately erected a better bridges and two batteries near the lunette of the Saint-Eloi Gate.

On 6 September, the Maréchal de Villars arrived at Douai and ordered simultaneous attacks on the lunettes and on the covered way.

In the afternoon of 7 September, the French were ready to launch these attacks: 20 grenadier coys would lead the attacks, supported by 5 bns. The Lieutenant-General Marquis Vieuxpont commanded the right wing; the Maréchal de camp Prince Isenghien, the left wing; and the Lieutenant-General Valori was posted behind the right wing with the grenadier coys. Villars was behind the centre, and Montesquiou, the Marquis de Silly and Bellrieux acted as volunteers on the left wing.

On 8 September at 3:00 a.m. the French launched their attacks. The first four grenadier coys passed the fascine bridges who then broke. Nevertheless, the rest of the grenadiers advanced through deep water and occupied both outworks. On the left, the attack was equally successful and the French occupied the covered way. After 3 hours of heavy fighting, attack ceased. By then, the French had already lost approx. 850 men. At 11:00 p.m., fearing that the next attack would be decisive, Hompesch held a council of war with his officers. They agreed that any further resistance would be impossible. But due to heavy losses on the French side, they decided to open heavy fire throughout the night to obtain better capitulation conditions.

On 9 September at 11:00 p.m., Lieutenant-Colonels Prince of Hessen-Homburg and Hildebrand along with Major Otto were sent to Lieutenant-General Albergotti by Hompesch to negotiate the terms of the capitulation of the garrison. Lieutenant-General Hompesch asked for conditions similar to those obtained by the French at the siege of Douai in 1710. Albergotti informed the Maréchal de Villars who rejected this offer. Finally, Hompesch accepted Villars's counter-proposal and the 1,900 men of the garrison (including 200 officers and 1,200 sick) became prisoners of war. Men fit for duty were then used to repair damages to fortifications.

On 10 September, the prisoners marched to Beauvais in Picardie. Officers were allowed to return to their estates for 6 months to take care of private matters. The Marquis de Vieuxpont became commander of the French garrison of Douai (10 bns, 1 dragoon rgt).