The siege lasted from July to August 1712

In July, after the capture of Le Quesnoy, Despite, the withdrawal of the British Contingent, Prince Eugène retained his original plan to besiege the Fortress of Landrecies. The Prussian General Duke Leopold von Anhalt-Dessau was entrusted with the command of the siege corps which marched to Landrecies. His corps consisted of 34 bns and 30 sqns.

On 17 July, the Allied siege corps marched to a camp on the right bank of Sambre extending from Maroilles to Or. 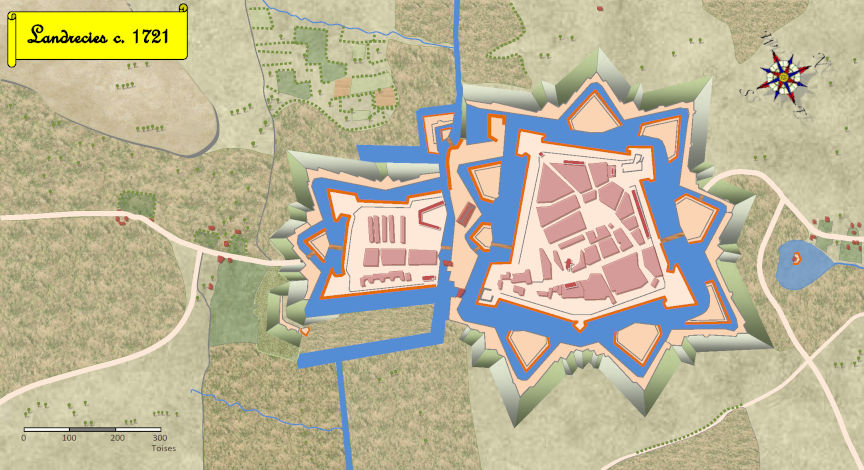 Map of the siege of Landrecies in 1712 – Courtesy: Dinos Antoniadis

The fortifications of Landrecies were in good conditions and the fortress was supplied with everything necessary.

The garrison consisted of 6 infantry rgts under the command of M. du Barail.

On 18 July, the Allied opened the trench. It traced a circumvallation-line extending 2.4 km on the left bank of the Sambre River and 1.2 km on its right bank, some 3,000 paces from the fortress. An "Observation army" of 67 bns and 220 sqns under the direct command of Prince Eugène was positioned between Fontaine-au-bois and Thiant. The left wing of this army deployed near Fontaine-au-bois covered the line of communication with Anhalt-Dessau's siege corps.

The Dutch General of Cavalry Earl of Albemarle defended the bridgehead and the bridge of boats at Denain with 10 bns and 23 sqns. His corps started to erect another wooden bridge.

On 24 July, Albemarle was defeated in the Battle of Denain. Form 25 July, a French force under Broglie blockaded Marchiennes, where the Allies had their most important magazines.

The Dutch now feared the Fortress of Douai and other fortresses and called for an operation to relieve Douai. Since Prince Eugène was dependent on the Dutch after the withdrawal of the British, he had to give in to their urging and took the necessary steps to raise the siege of Landrecies.

General Grovestine, who was returning from his foray into the Province of Champagne, received the order to march to Tournai and to harass the enemy with his detachment.

On 1 August, the Allies sent a few bns as reinforcements to the garrison of Le Quesnoy

On 2 August, the Allies sent a reinforcement of 1 bn and 300 horse to the garrison of Bouchain. The same day in the morning, Prince Eugène raised the siege of Landrecies and the siege artillery was transported to Le Quesnoy. The siege corps made a junction with the main army at Poix.

Commander of the Siege Corps: General Duke Leopold of Anhalt-Dessau