The regiment was created in 1670. It was raised in Holbæk, Dragsholm, Kalundborg, Ringsted, Sorø and Andvorskov counties. In 1675, it was divided in the 1st and 2nd Sjællandske Cuirassiers.

The Regiment did not take part in the War of the Spanish Succession. 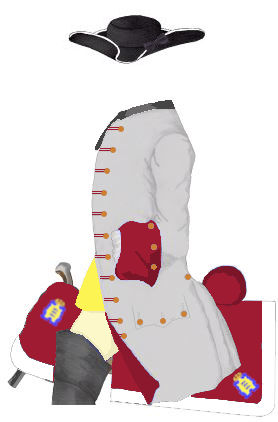 Uniforms of officers differed from those of the privates and NCOs by the finer material used. They were not standardized across the entire army but seem to have been similar within a regiment. Buttons were silver-plated and silver embroideries decorated the coat, cuffs and pocket flaps. Their coat could be single or double-breasted. The hats of officers were often edged with a white plumetis. The officers wore full cuirass.