The regiment was created in 1670 as the 2nd Jyske Nationale Rytterregiment. On 1 July 1675, the unit was divided in 3rd Jyske Cuirassiers and 4th Jyske Cuirassiers. The fourth regiment recruited in Kolding, Stjernholm and Aarhus Counties.

From 1701 to 1713, during the War of the Spanish Succession, the regiment served in the pay of the Dutch Republic with the army of the “Sea Powers.”

The regiment was disbanded in 1714.

Throughout the war, the regiment served with the army of the “Sea Powers.”

In October 1701, two squadrons crossed the Elbe and marched by way of Hanover and Münster to Friesland and Brabant.

In 1702, these squadrons took part in the siege and capture of Liège.

In mid-March 1704, after settling the problem with pay arrears, these squadrons were posted in Southern Brabant. In July, they were ordered to join Marlborough's Army in Bavaria. They join the army at Nördlingen. On 13 August, they took part in the Battle of Blenheim, where they formed part of Rantzau’s Brigade, which was posted on the extreme right of the centre in third line. In the autumn, they took part in the sieges of Trarbach and Saarburg. They took up their winter-quarters between the Moselle and the Rhine.

At the end of May 1706, these squadrons joined Marlborough's Army and, on 23 May, took part in the Battle of Ramillies, where the Danish cavalry distinguished itself. The regiment formed part of Brockdorff´s Brigade, on the left wing They were present at the ensuing sieges of Antwerp, Ostend, Menin, Ath, Dendermonde and Oudenarde.

On 11 July 1708, the regiment took part in the Battle of Oudenarde.

In 1709, these squadrons took part in the siege of Tournai. On 11 September, they fought in the Battle of Malplaquet.

In 1714, the two squadrons returned to Denmark. 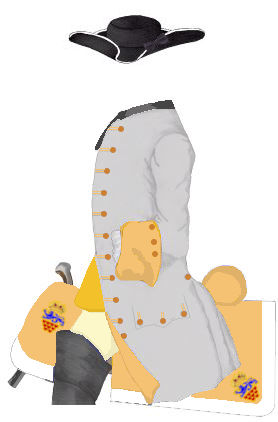 Uniforms of officers differed from those of the privates and NCOs by the finer material used. They were not standardized across the entire army but seems to have been similar within a regiment. Buttons were silver-plated and silver embroideries decorated the coat, cuffs and pocket flaps. Their coat could be single or double-breasted. The hats of officers were often edged with a white plumetis. The officers wore full cuirass.

Colonel Standard: white field; the Dannebrog (a white cross pattée) on a red field in the first canton (upper left); centre device consisting of a crowned blue lion passant with 9 red hearts underneath on a yellow field; the whole surrounded by a baroque frame in gold; golden fringe.

Company Standards: blue field; the Dannebrog (a white cross pattée) on a red field in the first canton (upper left); centre device consisting of a crowned blue lion passant with 9 red hearts underneath on a yellow shield; the whole surrounded by a baroque frame in gold; golden fringe. The motto “BLANDT TORNE ROSEN GROR” in gold under the center device.

Wienand Drenth for additional information on this regiment.