The regiment was raised on 19 March 1671 for Zeger van Rechteren, Baron van Almelo. The proprietor had had a previous cavalry regiment from October 1665, but it had been disbanded in November 1668.

In 1700, one squadron (3 companies) of the regiment took part in the campaign in Schleswig-Holstein.

On the eve of the War of the Spanish Succession, the regiment consisted of two squadrons and belonged to the Provinces of Geldern.

Since its creation, the successive colonels of the regiment were:

During the War of the Spanish Succession, the successive commanders of the regiment were:

In 1795, the regiment was incorporated into the 2e Regiment Zware Cavalerie.

In July 1702, the regiment was at the camp of Dukenburg, near Nijmegen. It was attached to Hessen-Homburg’s Brigade posted in the second line of the left wing. In December, it took up its winter-quarters in Susteren.

In 1703, the regiment took up its winter-quarters in Thielen.

In 1705, the regiment was at the camp of Lens. It took part in the combat of the Lines of Oostmaler.

In 1707, the regiment campaigned in Flanders.

On 11 July 1708, the regiment took part in the Battle of Oudenarde. It was also present at the siege and capture of Lille. On 28 September, it was at the Engagement of Wijnendale.

On 11 September 1709, the regiment took part in the Battle of Malplaquet.

From 23 April to 26 June 1710, the regiment was present at the siege and capture of Douai. 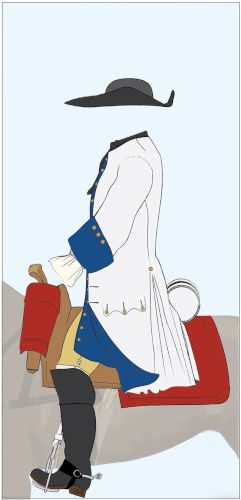 Officers wore a uniform similar to the one of the rank and file but of a better quality.

The standards of the regiment were blue with a white and blue fringe. The centre device represented a white armoured arm carrying a sword, coming out of a cloud. The motto ‘DEUS VEXILLUM MEUM Exod 17.V.IX” was also written on a scroll.

Phil Carrington for his work on the lineage of Dutch regiments

Mathias Kussmann for the initial version of the article