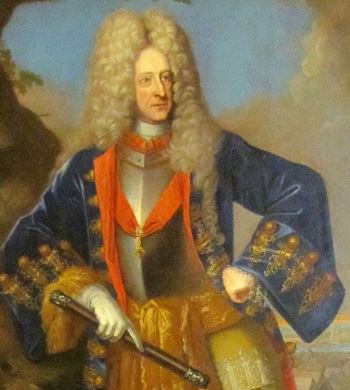 In 1655, Ludwig Wilhelm was kidnapped from his mother's home in Paris and brought to Germany where he was raised by his paternal step-grandmother, Maria Magdalena von Öttingen.

In 1669, Ludwig Wilhelm's father died and he became Hereditary Prince of Baden-Baden.

In 1674, Ludwig Wilhelm joined the Imperial Army. His first campaigns were made under the command of Montecuccoli against the French army of Turenne. Ludwig Wilhelm also served under the Duc de Lorraine.

In 1676, Emperor Leopold I gave an infantry regiment to Ludwig Wilhelm in recognition for his conduct at the siege of Philippsburg.

In 1677, at the death of his grand-father, Ludwig Wilhelm became Margrave of Baden-Baden.

On 12 December 1686, the Margrave of Baden was promoted to Feldmarschall (FM).

In 1689, the Margrave of Baden won the Battle of Niš against the Turks. The same year, he was appointed commander-in-chief of the Imperial Army in Hungary.

On 19 August 1691, the Margrave of Baden won a decisive victory against the Turks at Slankamen. He was then transferred to the western theatre of operation during the Nine Years' War (1688–97), taking command of the Army of the Rhine.

At the outbreak of the War of the Spanish Succession, in January 1701, Emperor Leopold I resolved to assemble an army of 20,000 men on the Rhine under the command of Ludwig Wilhelm, Margrave of Baden-Baden to make a diversion and to induce the princes of the Holy Roman Empire to join his alliance. On 15 June, the Margrave received instructions from Vienna to form three camps at Wiesloch, Offenburg and Heilbronn. He also managed to convince the Circles of Swabia and Franconia to assemble their troops. However, these circles resolved not to join the emperor's army. The Margrave established his headquarters in Rastatt. He then supervised the erection of the Lines of Stollhofen to block any French advance from the north into the Margraviate of Baden.

For the campaign of 1702 on the Rhine, Leopold resolved to assemble an Imperial army of 40,000 men that would be reinforced by contingents from various principalities of the Holy Roman Empire. He placed this army under the command of his son Joseph King of the Romans seconded by Margrave Ludwig Wilhelm of Baden. In March, the margrave ordered to establish a bridge on the Rhine at Spires (present-day Speyer) and another at Germersheim in preparation for the investment of Landau. In April, he requisitioned all boats passing by Spires on the Rhine to establish his bridge. On 21 April, his army passed the Queich. On 24 April, he sent detachments on the Lauter who made themselves master of Wissembourg and of the Castle of Saint-Rémy (unidentified location). Meanwhile, the margrave's own corps advanced to Kandel where he established his headquarters. Being master of the Lauter, he had a good defensive line against the French and had cut communications with Landau. By 17 June, the circumvallation around Landau was completed. The Margrave then had a redoubt erected on the canal. On 19 June, he opened trenches and the Siege of Landau began. The place finally surrendered on 9 September. From 20 September, the Margrave, in order to defend his own country, to prevent the junction of Catinat's forces with the Elector of Bavaria, and to win back the latter to the Habsburg side, recrossed the Rhine and hurried to Kehl with the greater part of his army (some 25,000 men), leaving a garrison in Landau (6 bns) and a corps of observation on the Lauter. On October 4, the margrave arrived at the camp of Friedlingen, facing Villars's positions at Huningue. On the night of 9 to 10 October, the margrave strengthened his left wing with new entrenchments. On 14 October, he was defeated by Villars in the Battle of Friedlingen. By 21 October, the margrave's army had assembled between Staufen im Brisgau and Freiburg im Brisgau.

In 1704, the Margrave of Baden took part in the Marlborough's campaign on the Danube. On 2 July, the margrave distinguished himself in the Battle of the Schellenberg where he was wounded. He then laid siege Ingolstadt and Landau, pinning down some Bavarian forces while Marlborough and Prince Eugène won the decisive Battle of Blenheim.

Ludwig Wilhelm died at his Castle of Rastatt in 1707. From 1707 to 1727, during the minority of his son Ludwig Georg, his wife assumed the regency.

N.B.: the texts on the period extending from 1700 to 1702 are mostly derived from our articles depicting the various campaigns, battles and sieges.