In October 1702, the Hofkriegsrat (Council of War) decided to raise three Hungarian, so-called “Hayducken” regiments and two Croatian Hayducken battalions. These regiments should be raised by the Hungarian Komitats. On 31 October 1702, Colonel Paul Bagosy was appointed commander of one of these regiments. He would be seconded by Lieutenant-Colonel Stephan Ebecky and Major Jeremias Andrássy. Bagosy's regiment was raised in Upper-Hungary (present-day Slovakia) and Transylvania. Its staff was posted at Erlau (present-day Eger/HU). It counted 2,000 men and consisted of 10 companies of 200 men each. More specifically:

In March 1703, Ebecky and Andrássy resigned their functions and were replaced by Franz Count Gyulai and Johann Rothanides. It proved to be difficult to bring the regiment to full strength. By 17 April 1703, only 1,600 men had been enlisted when the regiment marched to Ofen.

During the War of the Spanish Succession, the proprietors of the regiment were: 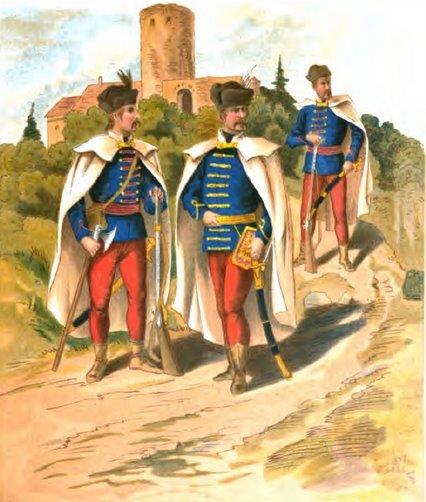 In March 1703, the newly formed regiment proceeded from Ofen to Italy where it arrived, at Madonna della Corona, at the end of June. In July, the regiment was in Ostiglia where it remained until the end of September. This period was used to train recruits. In October, the regiment was allocated to the corps on FZM Count Starhemberg and remained stationed between the Secchia and the Po rivers. On 24 December, Starhemberg's Corps moved towards Parma and Castelnuovo.

On 11 January 1704, the regiment took part in the combat at Castelnuovo against French troops of the Maréchal de Vendôme. After this combat, it took up its winter-quarters at Villanova where it remained until May. The regiment then took part in the defence of the Fortress of Ivrea and – at the surrender of the fortress on 29 September – was taken prisoners of war. Prisoners were transferred to France or to French fortresses in Italy. Only 101 men of the regiment escaped capture. They were assigned to the corps of FML Count Bagni near Goglione.

At the beginning of 1705, the regiment did not exist as a distinct unit. In the Summer, FM Prince Eugène de Savoie proposed to combine the remaining troopers of the Hayduck regiments Bagosy, Andrássy and Batthyányi in one regiment and to complete it to 2,000 men with new recruits. The commander of the amalgamated units would again be Colonel Paul Bagosy. On 19 September, the Hofkriegsrat accepted this proposal and appointed Franz Count Gyulai as lieutenant-colonel and H. Hanczok as major. The reorganisation of the regiment took some time and was not completed before the end of 1706.

In 1706, a detachment of the regiment took part, during 118 days, in the defence of Turin. On 1 September, Lieutenant-Colonel Franz Count Gyulai was transferred as colonel to Ebergényi Hussars while Lieutenant-Colonel Ladislaus von Bagosy and Ladislaus von Hanczok were transferred from the old Batthyányi Infantry Regiment to this (new) regiment. On 17 September, one battalion of the (new) regiment was deployed in Prince Eugène's Army during the victorious Battle of Turin. Towards the end of the year, the regiment fought at Alessandria and Modena. At the end of the year, Colonel Paul von Bagosy was sent end of 1706 to Hungary to raise new recruits. However, he deserted to the Hungarian rebels (the Hofkriegsrat would proscribe him in April 1707).

In 1708, the regiment assumed garrison duties in Mantua. 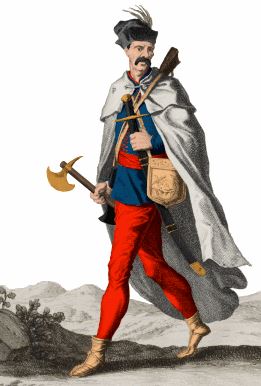 Uniform circa 1703 – Source: adapted from an illustration by Christoph Weigel

Armaments consisted of a musket, a sabre, a bayonet and a csákány, a type of hatchet on a thick 130 cm long wooden staff with a heavy hatchet-shaped brass head.

On the left side of the red cloth waist-belt hung a bayonet sheath made of calfskin; on the right side a powder horn containing priming powder. The cartridge pouch of the fusiliers was attached to the waist-belt.

N.B.: in many regiments a pair of mittens completed the equipment of soldiers.

NCOs also carried a cane whose characteristics indicated their precise rank. This cane had the length of a walking stick and was carried in and out of service. In action, to free hands, the cane was hanged to a button of the coat.

Uniforms of officers were always of finer cloth than those of the privates. Their Attila had golden lace and knots.