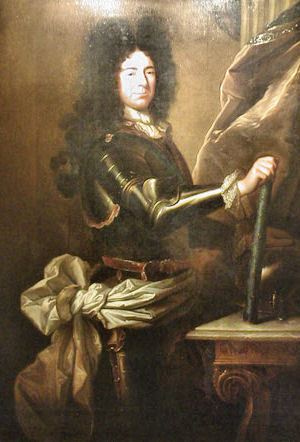 In 1663, Boufflers joined the French Army and took part in the siege of Marsal.

In 1670, Boufflers took part in the conquest of Lorraine under the command of Marshal de Créqui.

During the Franco-Dutch War (1672–78), Boufflers distinguished himself as colonel-général des dragons. He served under the command of Turenne.

In 1675, during the retreat after the death of Turenne, Boufflers assumed command of the rearguard.

In 1677, Boufflers was promoted to maréchal de camp.

In 1681, Boufflers was promoted to lieutenant-general.

During the Nine Years’ War (1688–97), in 1688, Boufflers commanded the Army of the Moselle and captured the Fortress of Mainz.

In 1690, Boufflers took part in the Battle of Fleurus.

In 1691, Boufflers took part in the siege of Mons where he was wounded.

In 1692, Boufflers was appointed commander of the Gardes françaises’and took part in the siege of Namur and in the Battle of Steenkerque.

In 1693, Boufflers captured Furnes. The same year, he was made maréchal de France.

In 1694, Boufflers became ‘’Duc de Boufflers’’ and was appointed governor of French Flanders.

In 1695, Boufflers defended the Citadel Namur for two months before capitulating.

Before the outbreak of the War of the Spanish Succession (1701–1713), in January 1701, Louis XIV resolved to occupy the places of the Spanish Netherlands previously confided to the Dutch at the Peace of Ryswick. He sent Marshal Boufflers to Lille to take command of the Army of Flanders and to prepare this operation. On 22 January, Boufflers arrived in Lille. In the night of 5 to 6 February, Boufflers sent detachments to occupy Nieuport, Oudenarde, Ath, Mons, Charleroy, Namur and Luxembourg. On 18 February, he deployed troops along the Dutch border. On 20 April, Marchal Boufflers, who had briefly sojourned at Versailles to receive the king's instructions, returned to Lille. On 21 April, he went to Ghent to meet with M. de Bedmar. From 22 to 26 April, Boufflers visited Ostend, Blanckenberg, Damme and Bruges, finding their fortifications in very poor conditions. He then re-arranged his positions strengthening the defences of Ghent and Namur; and sending 20 sqns and 9 bns to the frontier of Brabant to the French forces occupying Upper Guelderland. From 28 April to 3 May, he inspected the regions of Dendermonde and Antwerp; from 4 to 11 May, the region of Diest and the Upper Guelderland. On 12 May, he established his headquarters at Diest. In mid-July, Boufflers visited M. de Bedmar in Bruxelles to take arrangement for the deployment of the Spanish army. On 4 August, after reviewing the troops of M. de Bedmar at Bruxelles, Boufflers returned to Louvain. On 6 August, Villeroy personally came to Namur where he met Boufflers to discuss of their future plans. From 11 to 17 August, Boufflers inspected the frontier in the region of Ghent. On 8 September, he inspected the defensive works of the town of Limbourg. On 11 September, he returned to Louvain. On 20 October, Boufflers received Louis XIV's final instructions for the winter-quarters.

In 1702, Boufflers once more commanded the Army of Flanders. At the opening of the campaign, his army was deployed in the "Lines of Brabant". His army also held all the fortresses of the Meuse below Huy except Maastricht. In January, Boufflers established a strong camp (around 5,500 men) near Bonn to secure this region. In February, he sent additional reinforcements to Bonn. Around 9 March, he ordered to create magazines of wheat, oat and forage in the Electorate of Cologne and pressed for the completion of a bridge of boats at Kaiserwerth. On 11 April, Boufflers joined the main body of his army at Diest on the Demer. On 18 April, informed of the arrival of the Allies in front of Kaiserswerth, Boufflers marched from Diest to Peer with part of his army. On 21 April, he passed the Meuse and encamped between Roermond and Melick. On 24 April, he passed the Niers and encamped at Wachtendonk. He then forced an Allied corps to retire from Xanten. In the night of 1 to 2 May, Boufflers sent a detachment to reconnoitre the Allied camp at Kranenburg. On 3 May, the Duc de Bourgogne arrived at Boufflers' camp at Xanten to assume nominal command while effective command remained in the hands of Boufflers. On 11 June, their army forced the Allies to abandon their camp at Kranenburg and to precipitously retire to Nijmegen. On 26 July, Marlborough's army passed the Meuse on three bridges near Grave, thus threatening the communications of Boufflers' army with the Spanish Netherlands. From 27 July, Boufflers gradually retired to Tegelen and Roermond where he passed the Meuse, continuing his retreat to Bree and Hasselt and taking refuge behind the Lines of Brabant on 3 August. The Allies then made themselves master of Venlo, Stevensweert, Roermond and Masseik without any intervention by Boufflers, thus clearing the Meuse of French garrisons op to Maastricht. In October, the Allies captured Liège while Boufflers returned to the Lines of Brabant. In mid-November, Boufflers' army took cantons in Brabant and between the Sambre and the Meuse.

In 1704, Boufflers was appointed commander of the Gardes du Corps du Roi.

In the summer of 1708, after the Battle of Oudenarde, Boufflers defended Lille during three month before capitulating. The same year, he was made peer of France.

On 11 September 1709, Boufflers took part in the Battle of Malplaquet where he had to assume command when the Maréchal de Villars was wounded, masterfully directing an orderly retreat.

Boufflers died at Fontainebleau on 22 August 1711.

N.B.: the sections describing Boufflers' service in 1701 and 1702 are mostly derived from our articles depicting the various campaigns, battles and sieges.