The tercio was raised on 19 February 1656 by Jean François de Nestien in the Spanish Netherlands. It initially counted eight companies. In 1675, the tercio became “Nicolas Richard Du Puys”; in 1692, “Philippe Gourdin”; and in 1697, “Alexandre Cécile”.

In 1656, during the Franco-Spanish War (1635–59), the tercio observed the manoeuvres of the French army of General La Ferté. It then took part in the relief of Valenciennes and in the siege and capture of Condé. In 1657, it participated in the capture of Saint-Guillain and Calais; in 1658, in the sanguinary Battle of the Dunes.

In 1667, at the outbreak of the War of Devolution (1667–68), the tercio took part in the unsuccessful attempt to relieve Lille.

In 1672, at the beginning of the Franco-Dutch War (1672–78), the tercio was part of the Spanish auxiliary force sent to the help of the Dutch Republic. In 1673, the tercio took part in the siege and capture of Naarden; in 1674, in the Battle of Seneffe and in the unsuccessful siege of Oudenarde; in 1676, in the defence of Valenciennes; in 1677, in the relief of Saint-Omer, in the unsuccessful siege of Charleroi; and in 1678, in the Battle of Saint-Denis.

In the Spring of 1701, the 2 squadrons of the regiment were stationed in the Spanish Netherlands.

By 18 April 1702, the regiment was part of the army of the Marquis de Bedmar. It was encamped between Antwerp and Lierre. On 11 May, when Bedmar set off from Antwerp, the regiment was left behind at Antwerp under the command of M. de Ximenès. By mid-May, it was attached to Bedmar's field army. By 28 September, it had been transferred to the army of the Maréchal de Boufflers where it was placed in the second line of cavalry.

By 4 May 1703, the regiment was attached to the field army of Maréchal de Villeroy and Maréchal de Boufflers, in De Bar' Brigade in the second line of the cavalry left wing.

In July 1707, under the command of La Motte and Grimaldi, the regiment took part in the recapture of Bruges and in the surprise attack on Ghent.

On 11 July 1708, the regiment took part in the Battle of Oudenarde and, on 28 September, in the engagement of Wijnendale.

In 1709, the regiment took part in the siege of Tournai.

In 1710, the regiment was transferred from the Spanish Netherlands to Spain. On May 10, it landed in Catalonia. It later received new mounts in Andalusia. On 20 August, it fought in the Battle of Saragossa.

In 1714, the regiment joined the army besieging Barcelona.

Very little is known about the uniform of this regiment to the exception that the uniform was white with green as its distinctive colour. We don't know the metal colour of the regiment.

There is a description of the standards of the regiment in Clonard's work but we don't know at what time these standards were introduced.

The colonel standard, carried by the first squadron, was made of white damask with silver embroideries and borders. 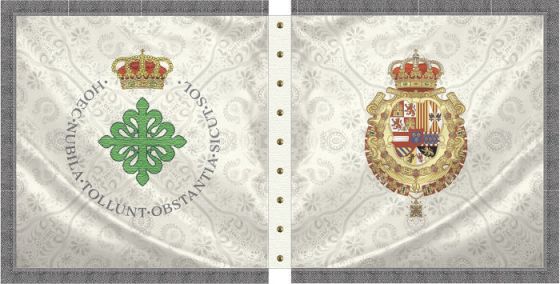 The regimental standards were made of crimson damask with silver embroideries and borders.