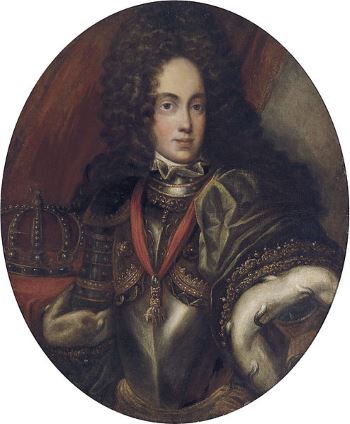 Archduke Charles was the second son of Emperor Leopold I by his third marriage with Eleanore, daughter of Philip William of Neuburg, elector palatine of the Rhine.

In 1700, when the Spanish branch of the House of Habsburg became extinct, Archduke Charles was put forward as the lawful heir in opposition to Philip V, the Bourbon to whom the Spanish dominions had been left by the will of Charles II of Spain.

On 19 September 1703, Archduke Charles was proclaimed king of Spain as Charles III by the Habsburg party in Vienna and made his way to Spain by the Low Countries, England and Lisbon.

Charles remained in Spain from 1705 to 1711, mostly in Catalonia, where the Habsburg party was strong. Although he had a certain tenacity of purpose, which he showed in later life, he displayed none of the qualities required in a prince who had to gain his throne by the sword. He was so afraid of appearing to be ruled by a favourite that he would not take good advice, but was easily earwigged by flatterers who played on his weakness for appearing independent.

In 1708, Charles was married at Barcelona to Elizabeth Christina of Brunswick-Wolfenbüttel (1691-1750), a Lutheran princess who was persuaded to accept Roman Catholicism by the assurances of Protestant divines and of the philosopher Leibnitz, that she could always give an Evangelical meaning to Catholic ceremonies.

On 17 April 1711, on the death of his elder brother Joseph I, Charles inherited the hereditary possessions of the House of Habsburg, and their claims on the Empire. The death of Joseph without male issue had been foreseen, and Charles had at one time been prepared to give up Spain and the Indies on condition that he was allowed to retain Naples, Sicily and the Milanese. But when the case arose, his natural obstinacy led him to declare that he would not think of surrendering any of the rights of his family. It was with great difficulty that he was persuaded to leave Spain, months after the death of his brother (on 27 September 1711). Only the emphatic refusal of the European powers to tolerate the reconstruction of the empire of Charles V forced him to give a sullen submission to necessity. He abandoned Spain and was crowned emperor on 22 December in Frankfurt, but for a long time he would not recognize Philip V. It is to his honour that he was very reluctant to desert the Catalans who had fought for his cause. Some of their chiefs followed him to Vienna, and their advice had an unfortunate influence on his mind.

In 1718, Charles's Catalan councillors almost succeeded in arousing his suspicions of the loyalty of Prince Eugène de Savoie at the very moment when the prince’s splendid victories over the Turks had led to the peace of Passarowitz on 28 July, and a great extension of the Austrian dominions eastward.

Charles showed an enlightened, though not always successful, interest in the commercial prosperity of his subjects, but from the date of his return to Germany till his death his ruling passion was to secure his inheritance against dismemberment. As early as 1713, he had begun to prepare the “Pragmatic Sanction” which was to regulate the succession. An only son, born on 13 April 1716, died in infancy, and it became the object of his policy to obtain the recognition of his daughter Maria Theresa as his heiress. He made great concessions to obtain his aim, and embarked on complicated diplomatic negotiations.

Charles's last days were embittered by a disastrous war with Turkey (1737-1739), in which he lost almost all he had gained by the peace of Passarowitz.

Charles died at Vienna on 20 October 1740, and with him expired the male line of his house. Charles VI was an admirable representative of the tenacious ambition of the Habsburgs, and of their belief in their own “august greatness” and boundless rights.