Already in 1689, the famous partisan Pál Deák de Miháldy had raised a band of hussars to fight against the Turks. On 20 February 1696, Deák received a letter patent from Emperor Leopold I authorising him to raise a hussar regiment of 1,200 men in the districts between Danube and Tisza. This regiment would become the second oldest Austrian hussar regiment. Deák equipped his hussars with leather dolmans and leather pelisses (only officers' uniforms were made of cloth) with red (later yellow) braids, red trousers, kolback with green bag.

In 1696, the regiment served in Hungary against the Turks, taking part in the engagements of Temesvár and Olasch. In 1697, it campaigned around Zenta under Prince Eugène de Savoie but saw no action. In 1698, it took part in the engagements of Temesvár and Gross-Becskerek. The same year, the regiment incorporated irregular Kis-Balás regiment (militia hussars) and was transformed into a regular hussar regiment and thus reduced from 1,200 to 800 men. The troopers in surplus were transferred to Pálffy Hussars and Kolonits Hussars. In 1699, the regiment was garrisoning Klausenburg.

In 1700, the regiment was disbanded. Its officers were transferred to Pálffy Hussars and Kolonits Hussars. However, at the beginning of 1701, Prince Eugène instructed Pál Deák to raise a new unit of 4 companies (totalling 400 men). The new regiment was gradually brought to full strength by the incorporation of troopers from disbanded hussar regiments.

The successive proprietors of the regiment were:

Until 1716, the proprietors of the regiment assumed effective command.

After the War of the Spanish Succession, the regiment operated in Hungary.

In 1701, 2 squadrons (4 companies) of the regiment were sent to Northern Italy. They set off from Ofen and marched through Carinthia by Linz and Botzen (present-day Bolzano) to Rovereto. During the ensuing campaign, they were attached to Vaubonne's Corps. On June 1, these 2 squadrons were attached to an Imperial corps who marched eastwards from Rovereto towards Posina, Arsiero, Piovene Rocchette and Schio on a road prepared in the preceding days. By 6 June, they had joined the main body at San Martino near Verona. On 24 November, Vaubonne's Corps attacked Pracontal's rearguard retiring towards Cremona, killing 200 men and capturing 76 men, 80 horses and 60 oxen. These 2 squadrons later took part in the surprise attack on Soncino. They then took their winter-quarters at Castiglione Mantovano.

In 1703, the regiment was initially attached to Vaubonne's Corps posted near Verona. At the end of the year, 2 squadrons were part of Starhemberg's Corps who marched to Piedmont.

In 1704, the regiment initially campaigned in Piedmont, its colonel (Déak) being captured by the French at Casale on 30 March (while he was in French prison, the Vienna authorities confiscated Déak's dominion in Hungary; Deák felt discriminated and took service in the French Army, taking command of an irregular French hussar regiment operating in Northern Italy.

In 1705, part of the regiment remained with Trautmannsdorf's Corps on the Po River while another part went to Southern Tyrol and fought at Madonna della Balzola and Bergamo. On 16 August, the entire regiment (8 squadrons) took part in the Battle of Cassano.

In 1706, the regiment participated in the attempt to relieve Turin. During the siege of Turin, Deák, who was still in the French service, collected all his officers and 70 Hungarian hussars and defected to the Imperial army. He then took service in his old regiment. On 5 April, he was promoted to general (GFWM). In February, the regiment became the property of General Viszlay and then, in the same year, of Stephan Baron von Splényi. On 6 September, the entire regiment fought in the Battle of Turin. The same year, the regiment was brought back to full strength by the incorporation of troopers from the disbanded Gombos Hussars, Czungenberg Hussars and Csáky Hussars.

In March 1707, Pál Deák, the former proprietor of the regiment died in Revere in Italy. The same year, a detachment of the regiment participated in the raid on Naples while the remaining companies took part in the expedition against Provence and in the siege of Toulon.

In 1708, the regiment was transferred to the Army of the Moselle and marched to the Low Countries. From August to December, it was present at the siege of Lille where its proprietor, Baron Splényi, distinguished himself as a capable commander.

On 11 September 1709, the regiment participated in the sanguinary Battle of Malplaquet.

In 1710, the regiment took part in the siege of Douai and Béthune.

In 1711, the regiment was initially posted on the Rhine where it saw no action. It was then transferred back to the Low Countries.

In 1712, the regiment campaigned in the Netherlands and took part in the Siege of Le Quesnoy. A detachment fought at Fampoux under Colonel Splényi, another participated in the raid of the Dutch General Grovestein into France.

In 1713, the regiment served on the Rhine and did not take part in any action.

At the creation of the regiment in 1696, Deák equipped his hussars with leather dolmans and leather pelisses (only officers' uniforms were made of cloth) with red (later yellow) braids, red trousers, kolback with green bag.

In the following sections, we describe the uniform circa 1706 as illustrated by Donath. 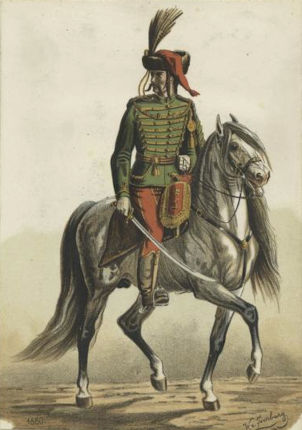 Uniforms of officers differed from those of the privates and NCOs by the finer material used and by the following additional peculiarities: