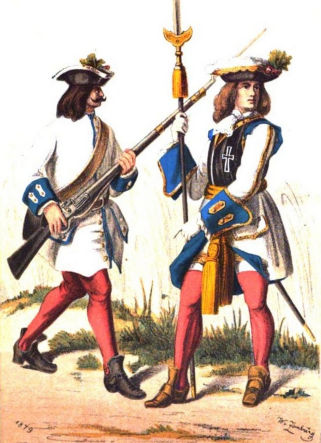 At the end of the XVIIth century, Emperor Leopold I was still involved in conflicts with the Turks in Hungary and with the French in Germany, Netherlands and Italy. Some German electors offered to raise regiments at their own expenses to support him in this difficult situation. One of them was Johann Wilhelm von Pfalz-Neuenburg, brother of Empress Eleonora. The Capitulation (contract) between Leopold I and Johann Wilhelm was signed on 15 March 1695. Johann Wilhelm had to raise an infantry regiment of 2,000 men in 12 coys. As per a decision of the Hofkriegsrat (war council) dated 10 June, Thüngen Infantry contributed 4 coys on 11 August to form the kernel of the new regiment. Thüngen Infantry was one of the best regiments of the army, known for the defence of Vienna in 1683 and for the attack on Neuhäusel (present-day Nové Zámky/SK) in 1685.

Recruiting went slowly and the 4 initial coys were sent to Peterwardein to serve as garrison. Recruitment was finally completed in the winter of 1695-96 and the regiment was assembled at Donauwörth. Franz Ludwig, Duke of Bavaria and “Hochmeister” (grand master) of the Teutonic Order, brother of Elector Johann Wilhelm Pfalz-Neuenburg, became proprietor and colonel of the regiment. Thus the regiment received the name of “Deutschmeister”.

On June 3 1696, the regiment was reviewed in Donauwörth. Effective command was assumed by Lieutenant-Colonel Damian Hugo Count Virmond. The 8 new coys were transported by ship on the Danube River to Hungary: 2 coys were stationed at Kaschau (present-day Košice/SK), the others at Szolnok, Szegedin and Eger in Hungary. The 4 initial coys, then posted at Peterwardein, marched to Buda under Count Virmond.

On September 11 1697, the Leib-Bataillon fought under Prince Eugène de Savoie in Rabutin's Corps against the Turks in the Battle of Zenta. Meanwhile, the remaining 8 coys garrisoned various places in Transylvania.

In 1698, the regiment saw once more action in Hungary. On 26 January 1699, it was at Karlowitz (present-day Sremski Karlovci/Serbia) undersigned a 20 years peace between the Emperor and the Turks. Two battalions led by Lieutenant-Colonel Virmond remained in Transylvania, while the “Leib-Bataillon” under Major von Collet garrisoned Kaschau.

The regiment drew its replacements from the Rhenish Palatinate and from the Teutonic Orders numerous and widespread estates in southern Germany. 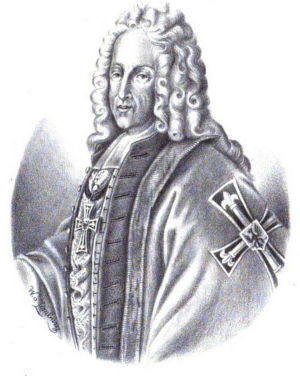 By the time of the War of the Spanish Succession, the regiment counted four battalions for a total of 17 companies.

The colonel proprietor was always the reigning Grand Master of the Teutonic Order:

The successive colonel-commanders during the War of the Spanish Succession were:

After the War of the Spanish Succession, in September 1714, two battalions went to Aachen and Henningen (part of Much, Nordrhein-Westfalen), while the third battalion remained at Ingolstadt. At the beginning 1715, the regiment marched to the Netherlands and garrisoned various places in the Province of Luxembourg. In February 1716, the three battalions were transferred from Bruxelles: the “Leib-Bataillon” to Roermond, the “Obrist-Lieutenant Bataillon” to Ath, and the “Obrist-Wachtmeister Bataillon” to Mons.

In 1701, the two battalions stationed in Transylvania went to Kaschau, where they joined there the third battalion. The regiment had now 16 companies.

In March 1704, the regiment went to Pressburg (present-day Bratislava/SK), where it was allocated to the brigade of GFWM Baron Ritschan. On 28 May, it took part in the Engagement of Smolenitz (present-day Smolenice/SK) where it lost 250 men. The rest of the regiment remained at Kaschau until the end of the year.

At the end of September 1705, the regiment received 300 recruits from Silesia. It was now at full strength with 17 companies. On 11 November, it took part in the battle of Schibó.

In October 1706, as part of Rabutin’s Corps, the regiment went to Kaschau. After failing to storm Kaschau, Rabutin marched by way of Tokay and Debrezin to Ofen, the regiment returned to Pressburg. For the winter of 1706/1707, the regiment was allocated to Starhemberg’s Corps, which marched to Austria.

On 1 May 1708, the regiment was concentrated at Pressburg. It served during the entire campaign with the corps of GFWM Siegbert Heister. On 3 August, during Rákóczi's War of Independence (1703–1711), the regiment took part in the Battle of Trencsén (present-day Trenčín/SK) against Rákóczi's rebels.

In September 1710, the regiment took part in the siege of Neuhäusel. After the surrender of the place, Colonel Count Zinzendorf garrisoned the place with 5 companies and 1 grenadier company.

On 30 April 1711, the last rebels surrendered in the plains of Majtény.

In 1712, now that Rákóczi's revolt had been quenched, the regiment was sent to the Netherlands, two battalions at Ribaucourt, and the third at Mons. In June, the three battalions were reunited at the camp of Le Quesnoy.. At the end of the month, the “Leib-Bataillon” was involved in the siege of Le Quesnoy. At the end of July, the “Obrist-Bataillon” was at the siege of Landrecies. On 25 July, two battalions took part in the Battle of Denain, where they lost 3 officers and 291 men killed; 3 officers and 32 men wounded; and 8 officers taken prisoner. The total losses were 14 officers and 373 men. After this disaster, the regiment went to Bruxelles. On 6 November, it received 1,000 new recruits from Upper Austria. The “Obrist-Lieutenant Bataillon” and one grenadier company were sent to Ingolstadt.

In April 1713, the staff, two battalions and the second grenadier company went to Gernsheim. During summer, two battalions were allocated to the corps of G.d.C. Marquis de Vaubonne. In September, the regiment came to Philippsburg and later on, to Rottweil.

Uniforms of officers were always of finer cloth than those of the privates. The were also distinguished from the uniforms of privates by the following differences: 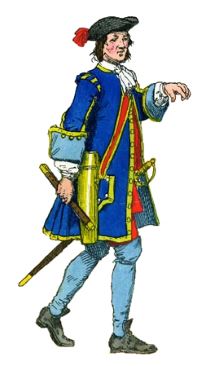 Fifer of Deutschmeister Infantry - Source: detail from an illustration of Richard Knötel

Drummers and fifers had coats They wore a very different uniform:

Colonel flag (Leibfahne): white field bordered with two rows of alternating black, yellow and red triangles (the outer row pointing inwards, the inner row, outwards); centre device consisting of a crowned and armed Imperial double-eagle with the initials of Emperor Leopold I LI (Leopold Imperator) on its breast; the centre device was surmounted by a scroll 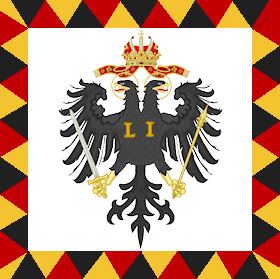 Regimental flags (Regimentsfahne): yellow field bordered with two rows of alternating black, yellow and red triangles (the outer row pointing inwards, the inner row, outwards); centre device consisting of a crowned and armed Imperial double-eagle with the the initials of Emperor Leopold I LI (Leopold Imperator) on its breast; the centre device was surmounted by a scroll 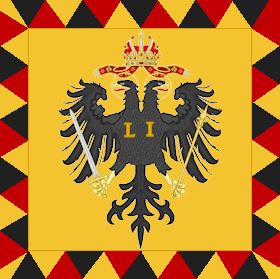