The regiment was originally raised in Turin on 24 January 1683, but its quarters changed at least three times during its existence.

At its creation, in 1683, the regiment was organised in:

The companies were designated as follows:

All other companies were designated by the name of their captain.

Usually the “Colonnella” company was managed and directly commanded by a substitute the senior lieutenant, known as a “Capitano-Tenente.”

In 1699, the regiment counted four squadrons. Each of its eight companies of the regiment was reduced to only 30 men for a total of 240 men.

For the campaign of 1702, the regiment had 6 companies organised in 3 squadrons of 205 men each.

By 1703, the regiment had been once more increased to 8 companies. On 21 December 1703, the Duke added 2 companies to the regiment, bringing its total strength to 10 squadrons and 700 men.

In 1701, the regiment was among the contingent that the Duke of Savoy sent to campaign with the Franco-Spanish army in Italy. On 15 June, the regiment set off from Savoy. On 3 July, it arrived in the Duchy of Milan where they were cantoned on the Oglio waiting for the duke's arrival. By 18 July, it had joined Catinat's Army and was posted near Monte Borghetto on the right bank of the Mincio. On 25 July, the Duke of Savoy assumed command of the army, replacing Catinat. On 26 July, he reviewed his army. On 31 August, as part of Monastérol's Cavalry Brigade, the regiment fought in an engagement near the Oglio. On 1 September, the regiment was present at the Battle of Chiari where it was kept in reserve and got involved only at the end of the battle. During the campaign, only five men of the regiment died. On 8 December, it took up its winter-quarters in Piedmont in the towns of Asti and Albba. By that time, it counted only 240 dragoons in four companies (i.e. 2 squadrons) of 60 men each.

In the spring of 1702, the regiment was increased to three squadrons of 205 men each, for a total of 615 men in eight companies. The regiment was once more part of the Savoyard Contingent sent to assist the Franco-Spanish army in Northern Italy. On 15 August, it was present at the Battle of Luzzara but was part of the reserve and saw little action. On 12 December, it took up its winter-quarters in Pinerolo in Piedmont.

In the autumn of 1703, when the Maréchal de Vendôme invaded Piedmont at the head of a Franco-Spanish army, the regiment took an active part in the defence of the country. On 11 November, Vendôme was informed that 400 Savoyard dragoon regiment (the present regiment) under General Parella were posted at Riva di Chieri near Turin. In the evening, Vendôme set off from Villanova d'Asti with 3,000 foot and 900 horse. On 12 November before daybreak, Vendôme arrived near Riva di Chieri and stormed the village which was defended by 100 dragoons, while the rest of the regiment was encamped nearby between two streams. The combat lasted all night. The Savoyard dragoons, closely followed by Vendôme's forces, managed to take refuge in Chieri which was a fortified town guarded by 4 battalions and 1 cavalry regiment. Vendôme decided to retire to Villanova d'Asti. In this action, the present regiment lost 2 men killed and 6 wounded. On 21 December in Chieri, the regiment received two additional companies bringing its total force to ten companies of 70 men each, for a total of 700 men.

In January 1704, the regiment escorted the Duke of Savoy from Chieri as he headed for Monferrato to join Starhemberg’s Imperialist army. During this period, the regiment took part in several minor engagements (probably around Vercelli, Casale, Chivasso and Verrua) where it lost 6 men killed. From May to July, one squadron of the regiment formed part of a detachment of 500 dragoons (including troops from the Dragoni di Genevois and the Dragoni di Piemonte) which took part in the defence of Vercelli. It surrendered as prisoners of war when the place capitulated.

From May to August 1705, the regiment took part in several actions in the region of Vercelli (at Abbazie di Lucedio, Trino Vercellese and Crescentino) in an attempt to put a stop to the advance of the French. On 15 May, a detachment of 150 men of the regiment along with 150 men of the Piemonte Reale Cavalry were sent to Monferrato. On 19 May, they arrive at Alessandria, spreading panic among the defenders. From there, the detachment advanced towards Castel Alfero where it took part in a skirmish. On 21 May, the detachment was back at Chivasso after successfully completing its mission. On 29 May, a few squadrons of the regiment took part in another skirmish near Vercelli (the French governor of the Vercelli was killed in action). On 19 June, part of the regiment fought in another skirmish near the naviglio of Chivasso. The regiment took up its winter-quarters in Chieri.

During the winter of 1705-1706, the regiment was transferred from Chieri to the camp of Alpignano, east of Pianezza, to control the Dora Riparia River and to stop the advance of the French.

At the opening of the campaign of 1706, the regiment counted 691 horses. On 19 May, it escorted two groups of artillery pieces (first of 12 guns, second of 4 guns) to be placed close to the banks of the Dora Riparia to contain the approaching French. At that time, the French were trying to throw two bridges across this river (one at Lucento, next to Turin and the other at Pianezza). The regiment took part in a skirmish near Pianezza. On 21 May, the Duke gave orders to the regiment to make a reconnaissance to get more information about the bridgehead that the French had recently established. During the siege of Turin, detachments of several units (including 20 or 30 men of the present regiment) were placed in Turin to serve the guns defending the city. In mid-June, the Duke of Savoy set off from Turin at the head of his cavalry (including the present regiment) to make an incursion in Southern Piedmont (Moncalieri, Carmagnola, Cherasco, Cuneo, Saluzzo, Cavour, Valle Pellice). Several skirmishes took place during this incursion. On 7 July, a more important engagement took place in front of the town of Saluzzo where the present regiment distinguished itself. In September, the Duke marched towards Turin, Carignano, Beinasco and Venaria Reale with his cavalry. On 5 September, the regiment, along with two Imperialists regiments attacked a French convoy of 1,450 mules escorted by two French dragoon regiments. On 7 September, the regiment distinguished itself in the decisive Battle of Turin. After the battle, the regiment had only 334 horses left and had to request 357 new horses to replenish its ranks.

On 19 July 1709, the regiment took part in a skirmish near Mouthiers where it lost one man killed.

In 1711, the regiment campaigned in Savoy where it took part in a skirmish near Conflans while following French troops retiring towards Montmélian. On 11 September, it took part in its last combat of the war at Demonte. 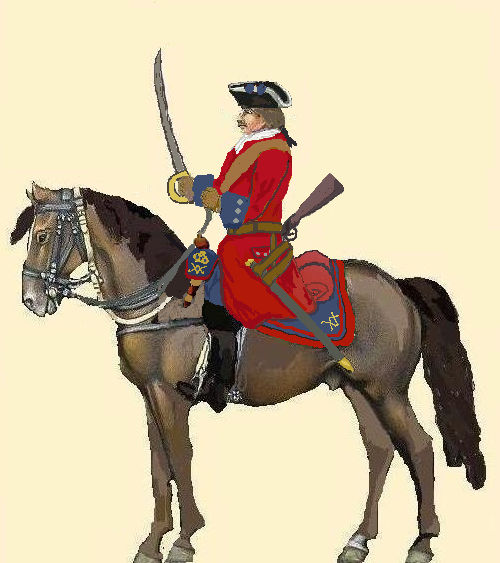 Troopers were armed with a sword, two pistols and a carbine with a bayonet. 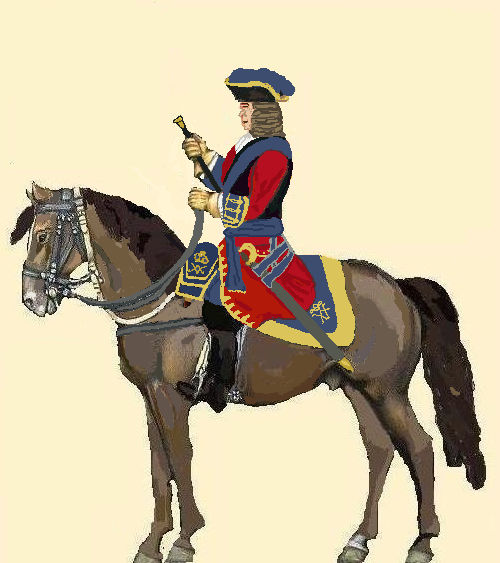 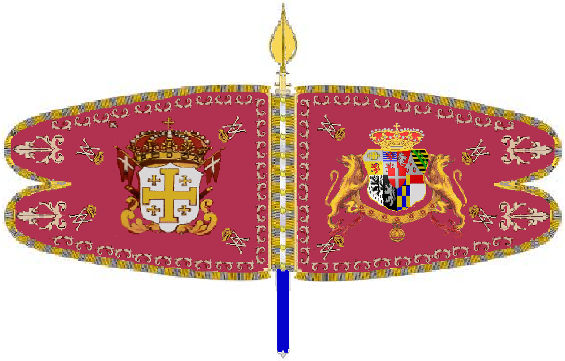 Fiorenti, Fabio: A me i miei dragoni, Gaspari Editore, Udine, 2006

Michele Savasta Fiore for the initial version of this article