On December 10 1688, Count Czobor obtained a letter patent authorising him to raise two regiments of hussars, of 1,000 men each. Czobor kept one of them for himself (this regiment became the property of Franz Nádasdy in 1714 and was disbanded in 1721) while Czobor's son-in-law, Colonel Johann Bernard Count Pálffy ab Erdöd, became proprietor of the second regiment (the object of this article).

On 30 August 1689, the regiment received its baptism of fire during the raid in Bosnia as it fought in the Battle of Batočina, where it distinguished itself. On 24 September, it took part in the Battle of Nissa, serving with distinction once more. It was then transferred to the Rhine and engaged against the French.

In 1690, the regiment received 440 new recruits and some hussars from the disbanded Deák Hussars. It thus reached its full authorized strength of 1,000 men.

From 1690 to 1697, the regiment participated in most of the combats fought on Rhine, in the siege of Mainz and particularly distinguished itself during the expedition in Lorraine in 1696.

At the end of 1697, after the signature of the Treaty of Ryswick, the regiment returned to Hungary.

On 24 August 1698, the regiment arrived at the camp of Kovil near Peterwardein and marched to Becskerek. It then participated in the expedition of Prince Eugène de Savoie against Temesvár and, on 19 September, it fought in the Combat of Temesvár where Captain Esterházy, son of Palatin Esterházy, was captured by the Turks. On 8 October, the regiment was surprised by the Tatars of Selimgirai-Chan near Becskerek but managed to repulse them with the support of the cavalry. By the end of the year, the regiment was at Arad where it took part in the improvement of the fortifications.

In 1700, the Hofkriegsrat (War Council) decided to disband the 3 existing hussar regiments and to appoint Count Pálffy as proprietor of the former Gondola Cuirassiers. However, the Hofkriegsrat later changed its mind and the former Pálffy Hussars remained in service and became the property of Baron Ebergényi.

The successive proprietors of the regiment were::

During the same period, the effective commanders of the regiment were::

After the War of the Spanish Succession, in 1714 and 1715, the regiment assumed garrison duty in Karczag, in various Hajduk towns and in the Komitates of Szolnok, Arad and Zala.

In 1701, the regiment was initially destined to the army operating on the Rhine. At the end of the year, 10 companies (5 squadrons) were transferred to Italy.

In mid-January 1702, the first squadrons of Ebergényi Hussars arrived in Italy. Colonel Ebergényi asked the Proveditore of Venice, Allesandro Molino, the authorization to march with his regiment through Venetian territory but his request was denied. The regiment then swam across the Adige River to reach Verona where the inhabitants received it with enthusiasm. In April, the rest of the regiment arrived in Northern Italy to reinforce the Imperial army. On12 May, the regiment arrived at Canneto. The regiment harassed the French in “Little War” (Kleinkrieg) throughout the year. It fought at Castiglione Montavano and distinguished itself on several occasions. Its most impressive action was the raid on Milan conducted by General-Adjutant Davia and Ebergényi with 200 hussars of the Ebergényi Hussars and Deák Hussars along with 30 cuirassiers. On 2 June, Ebergényi Hussars and 102 cuirassiers were detached on the Mincio with provisions for six days. On 15 August, during the Battle of Luzzara, the regiment was left behind at Sailetto to guard the camp and the baggage. On 21 September, this detachment set off form the camp of Sailetto, marched to Piacenza along the right bank of the Po, outflanked French positions in Eastern Lombardy and, on 26 September, reached Milan. On 3 October, Davia and his detachment safely returned to Sailetto with 20.000 fl. Raised as contributions. During its 450 km long ride, the detachment had inflicted big damages to the French. During Autumn, due to bad weather, troopers and horses of the regiment suffered from several diseases. The nearly ruined regiment spent winter around Mantua. Meanwhile, in December, the few companies left in Germany joined the corps assembling under FML Count von Schlik to attack Bavaria.

In 1703, the regiment was not involved in any action before October. At that time, Duke Victor Amadeus II of Savoy, who had abandoned the French alliance and joined Austria, asked for some cavalry support. On 18 October, around 1,300 horse (including 110 men from Ebergényi Hussars and Deák Hussars) led by the Marquis Visconti left Revere and marched by Genoa to Carignano where they arrived on 20 November. Around Christmas, another corps of 13,000 men (including 2 squadrons from Ebergényi Hussars) under the command of Count Guido Starhemberg also arrived in Piedmont to operate jointly with the Savoyard Army.

On 3 January 1704, Ebergényi with his hussars, acting as vanguard, surprised some Spanish outposts near Stradella, many Spaniards were taken prisoners. On 13 January, after the junction with the troops of the Duke of Savoy, Ebergényi Hussars surprised a French detachment near Terzo and annihilated it. The Allies then remained in the camp of Crescentino while their hussars harassed Franco-Spanish troops. The regiment spent the very hard winter in Piedmont, its troopers being forced to sell their weapons and other goods to survive.

In the Spring of 1705, Prince Eugène launched an offensive. The regiment – now under the command of Lieutenant-Colonel Ladislaus Baron Spényi de Mihály – distinguished itself once more in the “Little War”. On 16 August, after the Battle of Cassano, Prince Eugène retired to Lake Garda with his army for winter-quarters. The regiment was quartered in Vigone, south-east of Pinerolo.

In 1706, when Prince Eugène decided to relieve Turin, the regiment was part of the vanguard of Battée's Corps and crossed the Po on 17 July. On 7 September, the entire regiment took part in the Battle of Turin where it was deployed on the left wing along with Viszlay Hussars. Together, they attacked the flank and rear of the Franco-Spanish army. After the victory, the regiment closely followed the retreating enemy from Pinerolo to Fenestrelle.

In 1707, Lieutenant-Colonel Eugen Count Gyulai took effective command of the regiment. Despite some transfers from Gombos Hussars, Czungenberg Hussars and Csáky Hussars, the regiment could field only one squadron. Indeed, Rákóczi Uprising in Hungary hindered any enlisting of the regiment in its home country. In mid-May, a corps lead by FZM Daun set off from Bologna for Naples. Captain Királyi with a detachment of the regiment was part of this corps. On 1 July, Királyi captured a Spanish outpost near Capua. On 7 July, Daun's Army entered into Naples. Since June, Colonel Georg Count Csáky had assumed command of the regiment which marched from Sermide and Roverbella to Piedmont to effect a junction with the army of the Duke of Savoy. In July, this army marched by Busca and Nizza towards Toulon. The army then laid siege to Toulon but the attempt failed and, at the end of August, the army returned to Piedmont and took its winter-quarters.

In 1708, the regiment took part in the expedition who marched by Mont Cenis to occupy the Papal States by the end of the year.

In 1709, the Imperial army marched from Piedmont and entered into Southern France. However, the regiment (415 men strong) was left behind in Piedmont. In August, along with two other cavalry regiments, it marched by Mont Cenis to Termignan. On its way, it received new orders and had to follow the very difficult road linking San Bernardino to the Aosta Valley. It then took its winter-quarters in Cremona.

In 1710, the Imperial army operated in the Western Alps but most of its cavalry remained at Orbassano near Turin. The regiment took its winter-quarters in Cremona once more.

In 1711, the regiment was initially destined to join Allied troops campaigning in Spain. It incorporated 100 hussars from disbanded rebel regiments who had served under Rákóczi and then waited in the region of Mantua to be transported to Spain. However, the British government refused to pay for the service of the regiment in Spain. The regiment received new orders to join the main Imperial army at its camp near Turin. On 1 July, the regiment (4 squadrons for a total of 481 men) arrived at the camp. In July, it marched by the Aosta Valley. On 10 July, it arrived at Moutiers. It spent the following weeks harassing French troops in this region. In September, it returned to Piedmont and took its winter-quarters at Vigevano.

At the beginning of July 1712, the regiment joined the army assembling at Orbassano in Piedmont. However, it did not take part in any action and, in October, was sent back to Milan. It later took its winter-quarters near Mantua.

On 25 April 1713, the regiment was instructed to march to the Rhine. On 20 June, 3 squadrons arrived at Phillipsburg. Along with Esterházy Hussars and Babocsay Hussars, it harassed French troops. On 12 December, after the signature of the Treaty of Rastatt, the regiment marched to Bavaria and then went to Hungary. 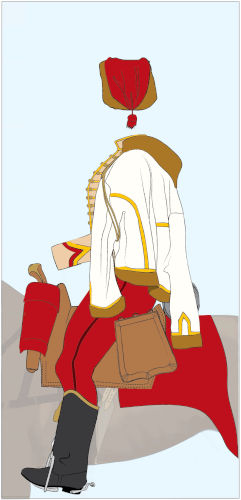 Uniform in 1702
Source: Illustration in the book tracing the history of the regiment

Uniforms of officers differed from those of the privates and NCOs by the finer material used. Buttons were silver-plated and embroideries decorated the uniform and the saddlecloth.

Harald Skala for the translation and synthesis of the work on the history of Hussar Regiment No. 9