The unit was created in the Province of Extremadura on 2 February 1659 by Captain Don Antonio de Issasi under the name of “Extremadura.” It initially counted 20 companies.

In 1676, the unit was transferred to the Army of Navarra and returned to Extremadura in 1680.

In 1689, during the Nine Years' War (1688–97), the unit joined the Army of Catalonia. In 1691, it took part in the defence of Seo de Urgel, Castellciutat and Barcelona; in 1692, in the engagement at the Pass of Portell and in the invasion of Roussillon; in 1694, in the defeat of Torroella; in 1695, in the blockade of Hostalrich and in an engagement at the Pass of Formich; in 1696, in the combat of Riu de Arenas; and in 1697, in the unsuccessful defence of Barcelona.

On 17 April 1701, the unit was sent to Aragon and from there to the vicinities of Madrid. It was then sent to Andalusia.

In 1702, the unit was in the port of Santa Maria when the Allies undertook the Siege of Cádiz. It contributed to the defence of the place which forced the Allies to re-embark.

In 1703, one company of the regiment was sent to Galicia to serve as a kernel for the creation of Santiago Viejo Cavalry on June 15.

In 1704, the unit took part in the campaign in Portugal, in the blockade of Arronches, in the sieges of Porto Alegre and Castelo de Vide. In the relief of the village of Guzman and in the burning of Ficalho. It was then transferred to Andalusia for the siege of Gibraltar. On 24 November, it was attached to the corps who advanced against the British troops landed at Algeciras and forced them to re-embark. The regiment then took up its quarters in the Port of Santa Maria where it was temporarily united with the Sagunto Dragoons.

When the unit was reorganised as a regiment, on 28 September 1704, it took the name of “Viejo de Extremadura.”

In 1705, the regiment guarded the frontier of Extremadura.

In 1706, the regiment was sent to the port of Santa Maria. When the Allies laid siege to Jeréz de los Caballeros, it came to its relief along with an infantry regiment commanded by Don Alonso Matias and forced the Allies to lift the siege.

In 1707, the regiment was at the sieges and capture of Serpa and Moura. It then took part in the blockade of Olivenza and in the siege and capture of Ciudad-Rodrigo which surrendered on 8 October.

In 1708, the regiment was initially allocated to the dismantlement of the fortifications of Serpa and Moura. It then joined the Army of Extremadura where it was posted on the right of the first line. On 25 September, it took part, under General Armendariz in the capture of Barbacena.

On 7 May 1709, the regiment took part in the Battle of La Gudiña where it was deployed on the right wing of the first line. In May, the regiment was at the blockade of Olivenza. In July, it stormed the camp of Telena near the Tagus.

On 11 March 1710, one squadron of the regiment crossed the frontier of Portugal under the command of General Montenegro and put 15 villages to contribution of which 9 were set afire. The detachment then returned to Castile with 3,000 cattle. On 2 July, 100 horse of the regiment were part of Montenegro's detachment who surprised the place of Miranda and, on 14 July, took Carvajales and later Puebla. Meanwhile, the rest of the regiment had been sent to Catalonia where it took part in the attack of Balaguer. On 20 August, it fought in the Battle of Saragossa. On 12 December, it took part in the Combat of Villaviciosa. The regiment then rejoined the Army of Extremadura.

In 1711, the regiment drove back the Portuguese from Zafra.

From 26 October 1712, the regiment took part in the siege of Campo-Major. The siege was lifted after 22 days of open trenches. The regiment was then transferred to Old Castile.

In 1713, the regiment covered the frontier between Castile and Portugal. On 17 August, it was ordered to march to Aragon.

In 1714, the regiment formed part of the force under the command of the Marquis de Toy who covered the siege of Barcelona.

For the moment we only know that the regiment had a blue uniform with red distinctive. We don't know the metal colour. In our plate all parts for which we have no information are coloured in grey. 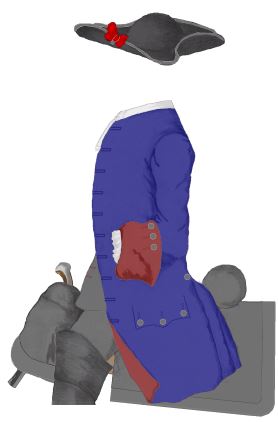 The standards were made of damask embroidered and bordered in gold. The centre device consisted of a sun dissipating clouds and the motto “Sic obvia frangit.”

Each other squadron carried a red standard.