From 1706, the regiment joined the Army of Andalusia and took part in the blockade of Gibraltar.

On 25 April 1707, the regiment took part in the Battle of Almansa where it was posted on the right of the first line. On 6 May, it entered into Valencia to prevent trouble. It was then sent to the frontier of Aragon to contain parties of migueletes who tried to penetrated into the Kingdom of Valencia. It later joined the Army of Catalonia commanded by the Duc d'Orléans in the camp of Castell de Farfaña. On 21 September, the regiment marched under the command of General Kercadó to occupy the Rivagorza and cover the bridge of Montañana.

In 1708, the regiment was transferred to the Army of Extremadura where it was posted on the left of the second line.

In 1709, the regiment campaigned with the Army of Extremadura. On 7 May, it took part in the Battle of La Gudiña where it was deployed on the left of the second line. The regiment then received orders to march towards the District of Valencia.

On 7 July 1710, the regiment formed part of the force under the Governor of Peñiscola who precipitously marched on Vinaroz to prevent the landing of an Allied force. It then joined the Army of Catalonia and took part in the campaign of Ibars. Finally, it retired towards Aragon. On 27 July, it fought in the Battle of Almenar. On 13 August, during the retreat of the Franco-Spanish army, the regiment, along with two other cavalry regiments, it covered the passage of the Cinca. On 15 August, it was attacked by 28 Allied squadrons near Peñalva, drove them back and pursued them up to Candasnos. The Allies rallied between Candasnos and Torrente but the regiment charged and routed them. On 20 August, it took part in the disastrous Battle of Saragossa. The remnants of the regiment then retreated to the Province of Extremadura where the army was reorganised. The regiment then joined the army campaigning on the banks of the Tagus. On 8 December, the regiment took part in the Combat of Brihuega and, on December 10, in the decisive Combat of Villaviciosa. It then pursued the enemy up to the banks of the Ebro. From Saragossa, it then returned to Extremadura.

In 1712, the regiment was sent to the camp of Calaf in Catalonia. In February, it skirmished with enemy foraging parties. In March, it was sent to Conca de Tremp to levy contributions. It also fought the insurgents. The regiment then returned to Extremadura to remount.

In August 1713, the regiment was transferred to the Kingdom of Valencia.

In 1714, the regiment was sent to Catalonia where it took part in the siege of Barcelona. Lieutenant-Colonel Terán with 100 horse and a few grenadier companies drove the insurgents out of Castellfel and Vilanova de Cubells, taking 19 soldiers and 3 officers as prisoners. After the capture of Barcelona, the regiment returned to Valencia. 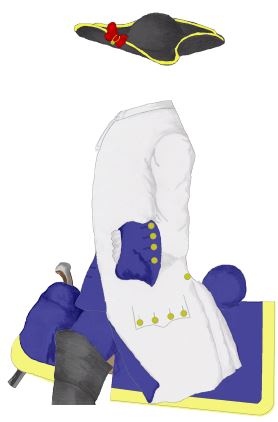